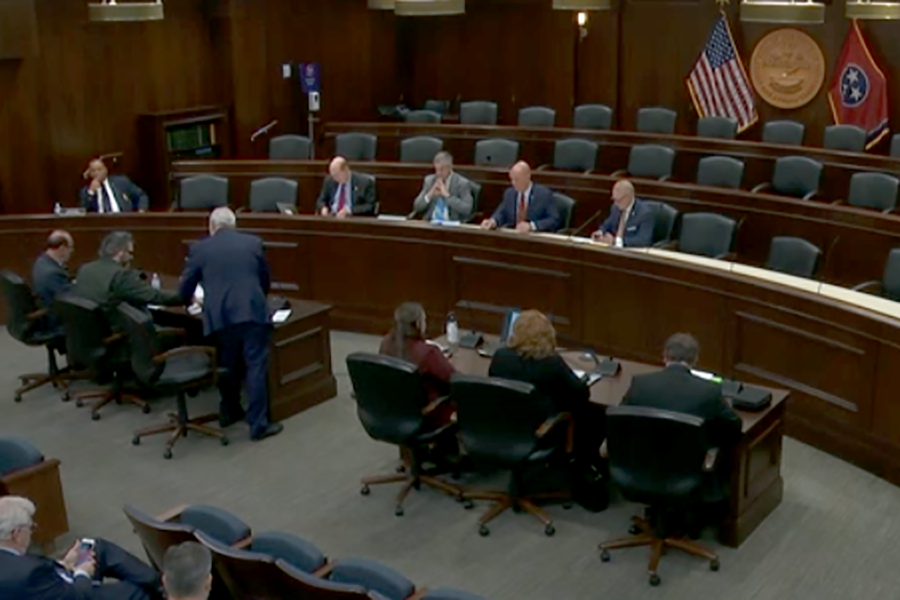 The Tennessee State Funding Board meets to discuss the budget for the upcoming fiscal year.

In light of projected economic uncertainty and financial changes brought about by the pandemic, the Tennessee State Funding Board elected to approve more conservative than normal budget estimates for upcoming financial years.

Thurman said “caution” had been the advice of all those who presented to the budget committee, leading to more conservative staff recommendations.

While economists predict growth in the state’s revenues, state officials were urged to consider a conservative approach to setting the 2022-23 year budget due to economic uncertainty related to concerns about inflation, workforce participation, consumer sentiment, and supply chain instability.

Coming out of the pandemic, officials noted that Tennessee and the nation are going through an unprecedented economic situation that makes future forecasting difficult.

“Nothing about the pandemic played out the way we thought it would,” Dr. Fox said. “Everything has been different from what I would have expected. I would be conservative because I think we are trying to forecast in a window none of us have ever seen.”

All economic officials who presented to the board predict tax revenues to continue to rise and sales tax revenue growth to remain strong through 2023, but caution that this growth may not be as high as growth seen in previous years.

The pandemic has changed the way Tennesseans are spending their money and most officials said some of that change may be permanent. Before the pandemic, service demand was higher than demand for goods, but that trend reversed during the pandemic. While services are again becoming more in demand as the pandemic lessens, trends seem to indicate these amounts will not rebalance to pre-pandemic levels entirely. Goods spending is expected to remain higher than it was pre-pandemic and services spending lower.

"Certainly, the state of Tennessee and states across this country have benefited from the shift in consumer spending we have seen over the past year-and-a-half from the majority of their spending being focused on services to a much larger mix on goods,” Graefe said. “It looks like as services become more readily available and as folks are about to go out and about there is certainly greater desire for more services spending than we saw in the pandemic. However, some of the shifts we see in the pandemic seem to be entrenched in bigger ways.”

The types of goods Tennesseans are spending on also has changed somewhat due to the pandemic. Fox said some of this spending is reflecting how many used government stimulus dollars to make big purchases during the pandemic, like a new car, putting a down payment on a house, or remodeling their home. These are one-time or once-in-a-decade purchases that the state will probably not see reflected again on such a large scale. However, the purchase of common goods may still higher than it was pre-pandemic.

With many turning to online shopping during the pandemic, officials said internet sales are expected to continue to grow, though the percentage points they post may not seem as high in previous years. This is because it has been nearly a year since the law changed on how those are collected.

"Sales tax grew 20% in the month of October and of that growth, about 17% was related to the marketplace facilitator [Internet sales] law,” Gerregano said. “If you include all online sellers who have registered since the Wayfair decision, that is closer to 30% of the growth we saw year-over-year. Next month, we will be comparing apples-to-apples from when that marketplace facilitator passed. It took a little while to ramp up, so I think we will see a difference next month and an even bigger difference in a few months after that.”

Gerregano noted that while the growth percentages received from internet sales taxes may not be rising as rapidly in the past, the amount of money coming in from them is still substantial.

Housing also grew massively during the pandemic, though there are some concerns on the horizon that supply chain bottlenecks and increased prices of material may price some out of the market. Housing starts and the collection of related taxes peaked during the pandemic, and remain at a high level despite tapering off.

Gerregano said sales tax on building materials have seen 14.42% growth in the last six months and real estate transfers are up nearly 55%. In total, the state has seen a 23.12% growth in housing related collections in the past six months.

Newhard noted that some of these costs are not being driven by more people buying homes but rather because financial investment in real estate is driving up prices. Home construction is higher than it was pre-pandemic because the ability to sell homes for more money attracts investment. However, this record-high housing starts are out of reach of many Tennesseans.

“The median home listing price in Tennessee has risen from $217,000 in July 2016 to $349,000 today, which is an increase of $132,000 in five years,” Newhard said. “That is more than 50% increase. I recently calculated for my students that it takes twice as many labor hours for the average worker to buy a house today as it did in 1980s. This is destroying the American Dream for the younger generations and the working poor who want to be homeowners someday. Higher prices mean more years spent renting while trying to save up enough for a down payment. More labor hours spent on housing mean less money saved for retirement and putting off retirement.” 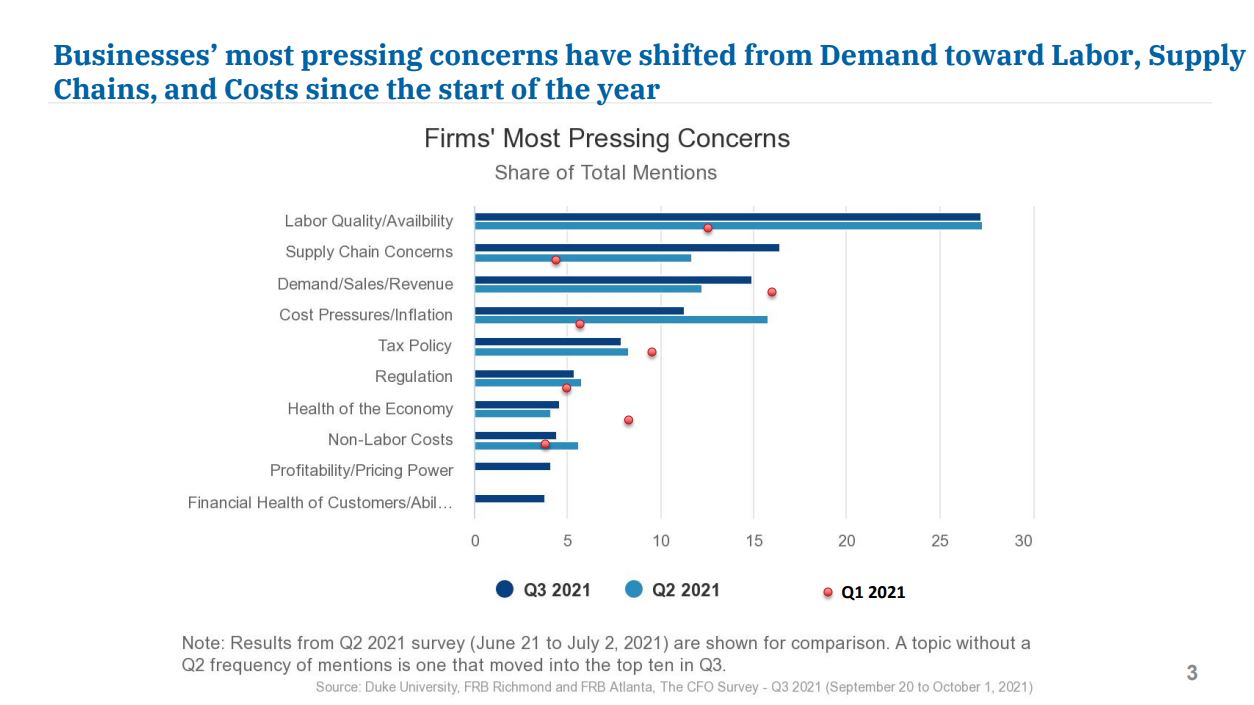 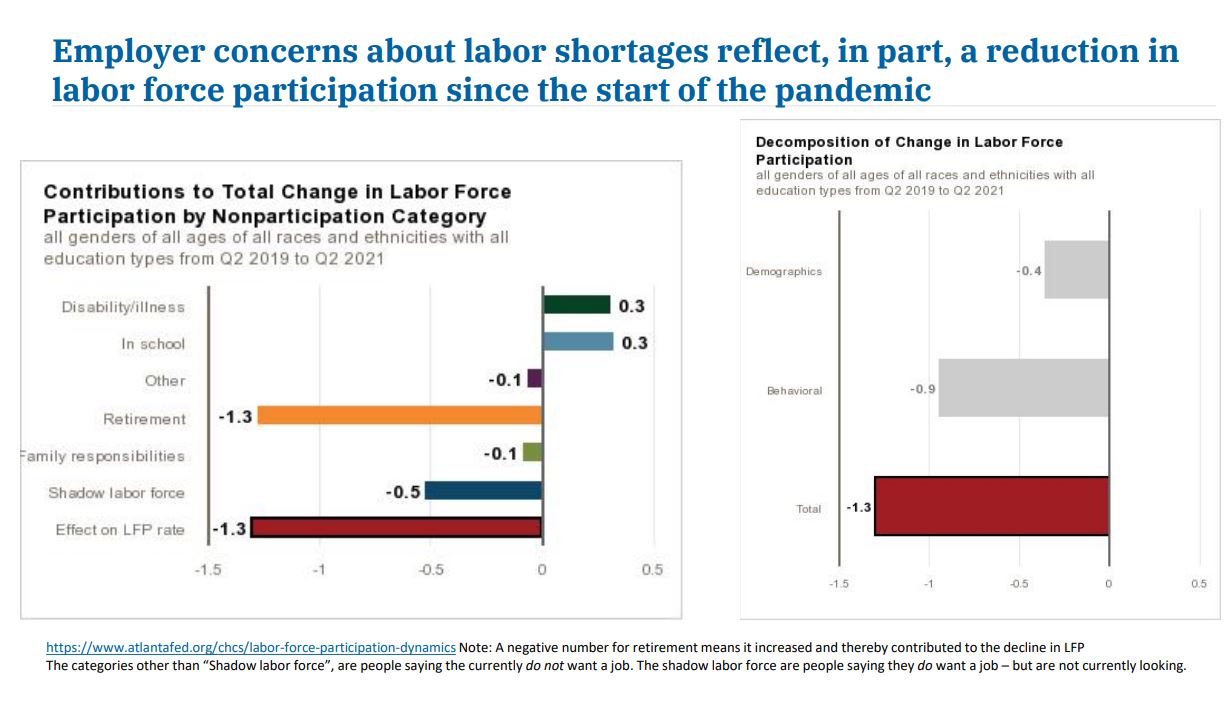 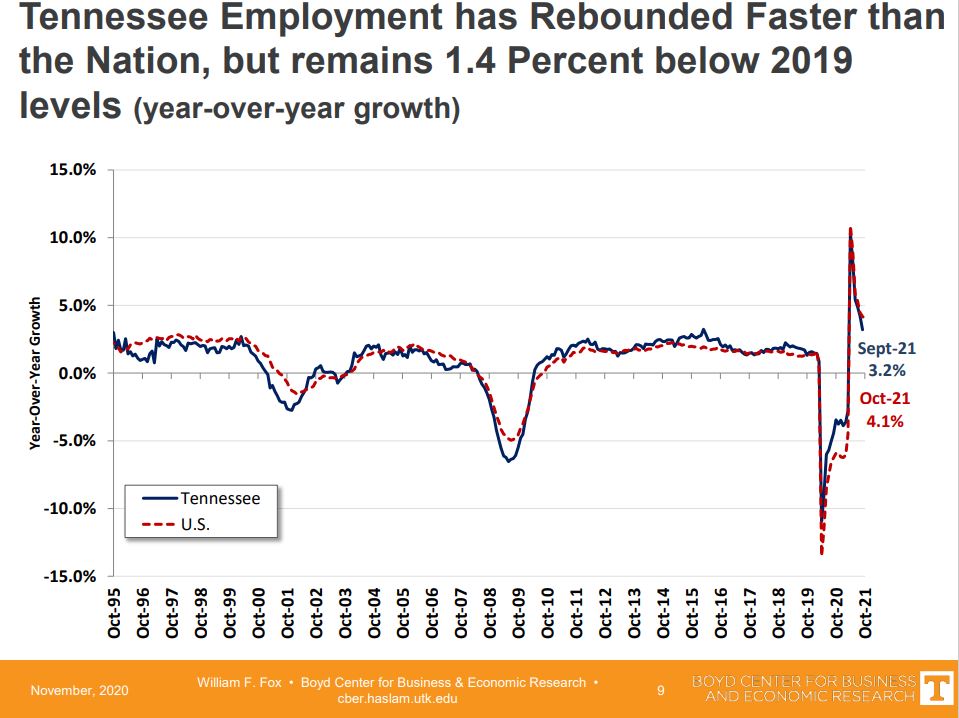 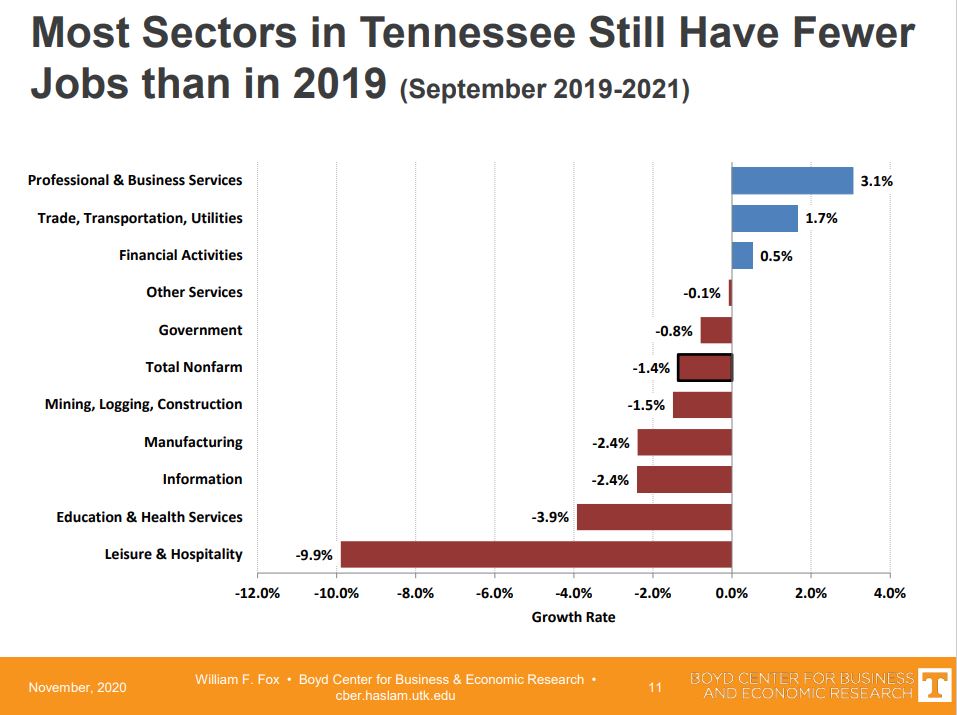 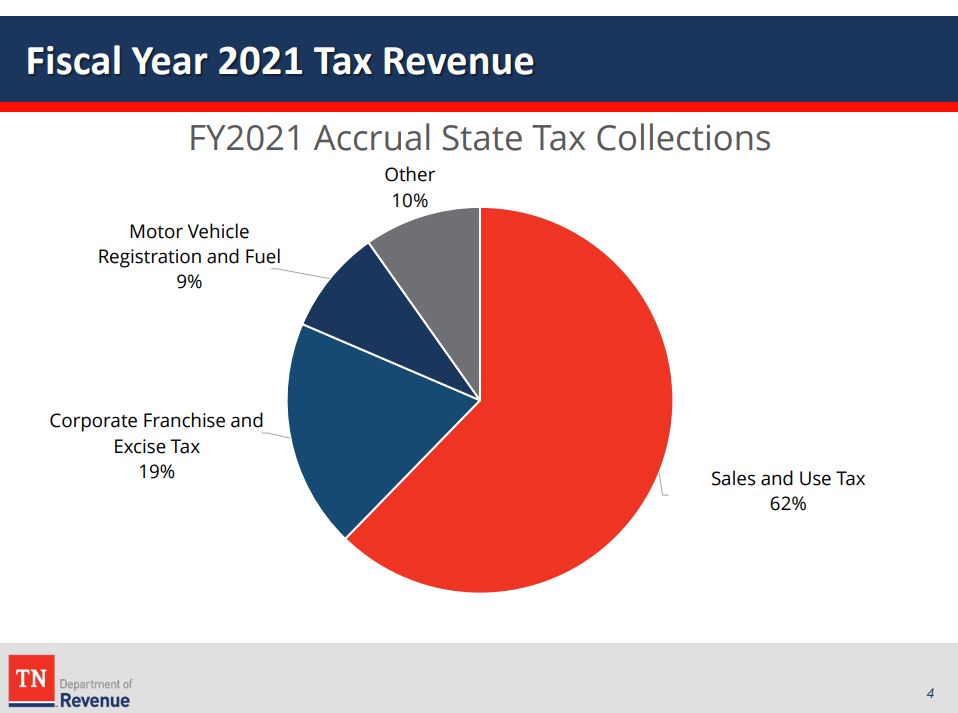 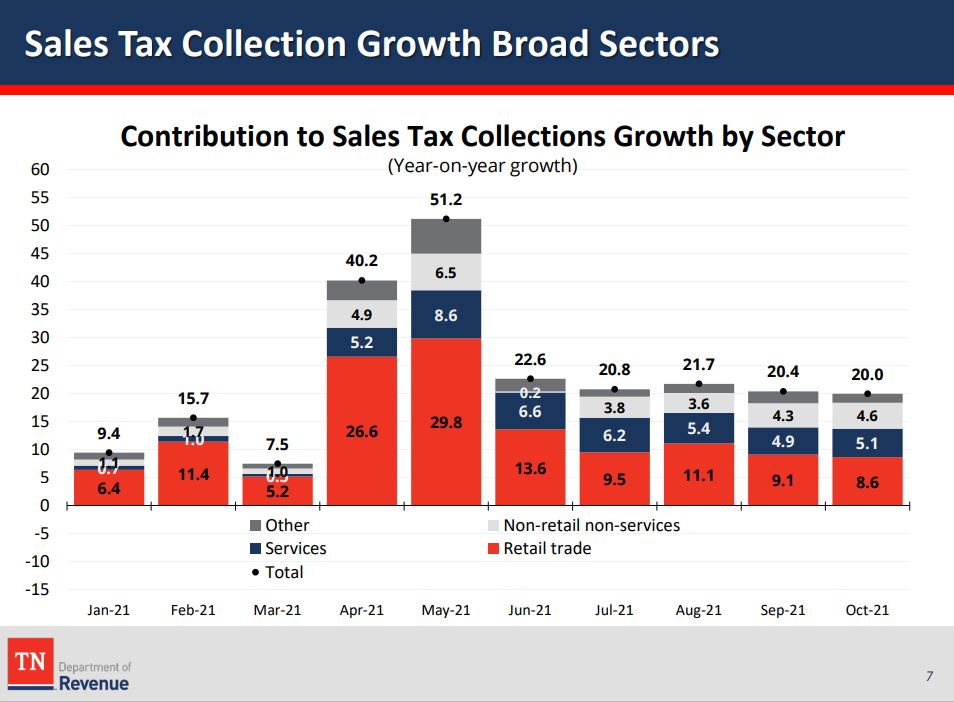 The pandemic has proved to be a mixed bag for businesses in Tennessee. While some sectors saw record-high sales during the pandemic, others – like hospitality and education – were devastated. Only the professional and business services, transportation and utilities, and financial sectors have seen job growth above pre-pandemic levels and there are still about 60,000 fewer people working in Tennessee than prior to the pandemic.

The way people are participating in the workforce has changed because of the pandemic, and it is instability related to these changes that has led to some instability concerns about the economy. While unemployment remains low, worker demand remains high because there are many people choosing to stay out of the workforce for the time being, what is known as the “shadow labor force.”

All presenters agreed there are a mix of reasons why Tennesseans are not returning to the workforce including people who decided to retire during the pandemic, dual-income families deciding they can make it on one income so as to not spend on childcare, foreign-born workers not being allowed into the country during the pandemic, a massive increase in entrepreneurship as evidenced by the increase in new business filings in the state, people getting better paying jobs, and those who managed to save enough during the pandemic that they are choosing not to return to work until they feel safe from the pandemic or until they find a position that meets with how they have changed their lifestyle.

Newhard noted that companies will most likely have to raise wages and increase benefits packages to induce many of these people back into the workforce, especially as other costs increase.

“Wages rising slower than prices meaning real wages are falling,” he said. “Anyone who has not received a raise of 6.2% in the past 12 months has actually seen a pay decrease."

Smith agreed based on what he has seen in Northeast Tennessee.

“It appears increases in wages will bid up supply as there are more incentives to return work,” Smith said. “Manufacturers in our community all increased wages, benefits packages, and almost all started offering bonuses to recruit workers who stay more than 90 days. A lot of people show for a day or a week and do not come back.”

Population growth may also help in this area. Tennessee is seeing growth of not only business but also population because of its lack of income tax, which Wegenka said means more workers coming into the state.

Another major concern looking ahead are continued supply chain backlogs. Along with labor and rising costs, supply chain issues are the top concern of employers and Graefe said more than 70% of firms in a recent survey reporting experiencing some sort of supply chain issue, resulting in lost sales.

Most firms are taking measures like diversifying their supply chains, increasing inventory, switching to U.S.-based or more local suppliers, and others to deal with these issues but are still concerned the problem may not be resolved until the second half of 2022 or early 2023.

“A lot is going to lie in the path of the pandemic globally,” Graefe said. “We have discovered how dependent our supply chains are across the globe. One chip can create backlogs that throttle our capacity to produce.”

Along with these supply chain backlogs has come inflation, which is driven by consumer expectations and can also change consumer spending habits.

Graefe noted that in October the nation saw the largest 12-month inflation increase in 30 years at 6.2%. Price setters are expecting inflation to last longer than previously predicted before it eventually dissipates, and Graefe said that consumer sentiment will play a larger role in when that happens. At present, Graefe said consumers are doing well on a personal perspective but their confidence remains shaky when asked about national and global issues.

However, Graefe said she does not anticipate another wage-price-inflation spiral like what was seen in the 1970s.

“It is always a risk and something to take very seriously,” she said. “Indicators both from worker and employer perspective are not pointing in that direction, although ultimately impetus for this spiral in an economic theory is something prompted not the real economy is driving inflation but expectations. Any sign expectations around cost and living and wage growth from employers are becoming unanchored would warrant serious consideration and action from the federal reserve.”

Fox said that inflation may change some spending habits. Fears of inflation are leading many consumers to purchase items before prices get higher, such as those who bought Christmas gifts early for fear of inflation and supply issues. With energy prices going up, Fox said there may be some impact to gas sales tax.