NLC releases new report: On the Frontlines of Today’s Cities 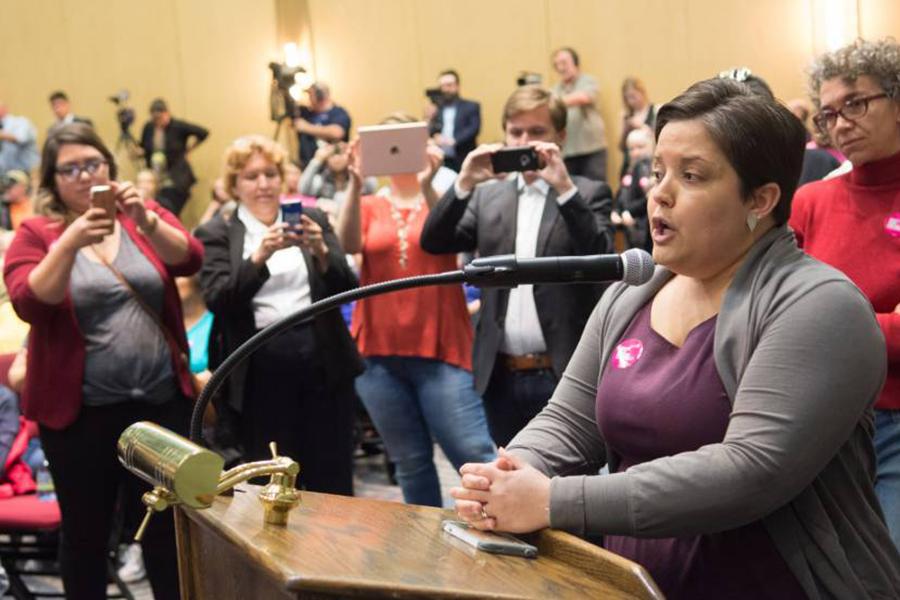 Many municipalities, school boards, boards of health, and other government entities have seen citizens using public forums, such as public comments section, not as places for civil discourse but as places to issue threats, harassment, and foster growing divisiveness. Of those polled, 81% of city officials said they have personally experienced harassment, threats, or violence.

Threats to city officials and municipal employees are on the rise, negatively impacting the ability of officials to do their jobs, making some leave the government sector altogether, and event creating budgetary consequences, according to a new report conducted by the National League of Cities.

The NLC report “On the Frontlines of Today’s Cities: Trauma, Challenges, and Solutions” found that 81% of local officials have reported personally experiencing cases of harassment, threats, and violence while 87% said that the levels of harassment, threats, and violence have increased in recent times, particularly since the start of the pandemic. In Tennessee, recent school board meetings in both Williamson and Rutherford counties became the subject of national media attention because of the aggressive behavior from members of the public toward school board members.

Four-fifths of mayors surveyed by the journal State and Local Government Review also reported some sort of psychological abuse, most often through social media. Furthermore, 93% of Americans believe that incivility is a growing problem in the country with 68% identify incivility as a major problem the nation is facing.

Clarence Anthony, CEO and executive director of the National League of Cities, said he too has noticed concerning changes in how the public interacts with officials on the local level.

“Local officials work at the level of government closest to the people and with this comes great honor and great challenge,” Anthony said. “Our local leaders are the ones we know – they are the ones we run into at the grocery store and the ones we see around our neighborhoods. And while partisanship and bickering may be an unwelcomed feature of state and federal politics, we are now seeing this trickle down to the local level unlike ever before. I have witnessed and heard about this change through my own personal interactions in meetings with local leaders across the country. It is clear that the environment has changed since my time as mayor of South Bay, Fla., a little more than a decade ago.”

As a result, NLC looked into the causes contributing to this increase in hostility, what impacts these behaviors are having on municipalities and those who work for them, and how steps can be taken to mitigate these threats or protect municipal workers.

There were six root causes identified by the NLC report that seem to have helped facilitate the increase in harassment being experienced by officials: polarization, political pushback, spreading misinformation and disinformation, where people receive their information, the growth of platforms for animosity, and a lack of regulation.

“While disagreement and debate are a healthy part of a functioning democracy, civil discourse in America has been increasingly in decline – we see it in the media and more frequently, we’re seeing it more in our own communities” Anthony said. “And as politics becomes increasingly hostile, so too has the severity and quantity of threats and harassment towards our local officials. The COVID-19 pandemic pushed many things to the extreme and vitriol toward local leaders is no exception.”

The increased polarization in American politics has led to what many NLC survey respondents found to be a major influence in the increasing incivility. A recent Politico survey found that more Americans than ever are viewing violence as justifiable for political means.

Liliana Mason, an associate professor of government and politics at the University of Maryland, noted that increasing identification with one group or another can both increase the “us versus them” mentality.

“As identify grows stronger and conflict intensifies, people will begin to approve of violence,” Mason said.

Echoes of the civil rights movement of the 1960s and women’s liberation movement of the 1970s can also be seen in the political pushback some communities are experiencing. As America becomes more diverse, there is more push to see this reflected in government. However, the consequences of this is that officials surveyed by NLC found that they were often targeted or harassed because of their gender or race.

The spread of misinformation and disinformation online as well as growing social media has contributed to an increase in polarization and pushback. Social media often contributes to confirmation bias, meaning users can chose to see only messages they agree with, further convincing them of their rightness. These echo chambers prevent users from being exposed to contradictory information.

Likewise, the decline of local newspapers, rise of news deserts, and other community forums that traditionally provided residents with information about local government are making it easier to spread disinformation and misinformation. Increasingly, unreliable sources of information on social media are fueling what citizens know – or think they know – about what is happening in their community. More than half of Americans report they receive at least some of their news from social media.

In addition to this spread of false information, social media has weakened the human connection between citizens and government officials. A recent study found that the anonymity of the online forum often always individuals to express viewpoints they may not feel comfortable doing so face to face. Online engagement also fuels increasingly violent rhetoric.

While local officials can monitor their own use of social media, there is still a need for large-scale regulatory action that builds a safer internet without violating free speech. There is a need to regulate the spread of false information that often fuels increased violence and polarization.

This increase in negative interactions with the public has led to troublesome consequences in many communities, including threatening the safety of local officials, interrupting the ability of officials to do their jobs, hindering growth in government, leading to a loss of institutional government, and even impacting municipal budgets.

“Our local leaders have become easy targets for frustration, anger and disillusion,” Anthony said. “With the combined impact of social media and political polarization, the work of governing has often come at the cost of public officials’ physical and mental well-being. Local leaders have faced everything from racist slurs to physical assaults and death threats.”

While harassment and violent behavior is sometimes seen as general expectation by those who have committed themselves to public office, many officials reported that the recent increase in threats has grown well beyond the norm. Many officials told NLC they have resorted to therapy or medication to deal with the increase in threats as well as feel that these threats are more likely to spill over from themselves to family members, friends, and even coworkers who are put as risk. One respondent event reported their children were getting harassing messages on their phones.

As a result, the survey found that many officials said challenges like mental fatigue, burnout, the fear of threatening phone calls or in-person harassment, and concerns social media engagement have made it difficult for them to do their jobs. Many expressed a fear of engaging with the public because of potential negative consequences. As they are often the most targeted groups, leaders from marginalized groups – like women and non-whites – feel these threats are compromising their ability to take part in government.

There is also a trend of longtime public officials quitting government work entirely because of increased hostility. Municipalities are losing institutional knowledge as mayors, elected officials, and even city employees decide to leave the government sphere due to increased polarization.

“Recent media reports from the New York Times and Kaiser Health Network, among others, highlight how many local public officials — mayors and those working in the areas of public health, elections and the school board — are choosing to resign or not run for re-election,” Anthony said.

These growing threats can also have an impact on municipal budgets with many cities having to consider adding line items dealing with safety precautions. Bullet-proof glass, metal detectors, developing plans for active shooter scenarios, hiring extra security, and other safety precautions have been added into numerous city budgets. Having local law enforcement investigate whether or not threats are credible as well as providing protection to officials who have been threatened can also increase expenditures.

There are some measures that municipal officials can take to ensure the safety of government leaders and city employees.

One way to mitigate incidents of harassment and provide a level of safety includes having an action plan to respond in case of violent incidents. However, only 40% of government officials reported they work in an office with a strategy to handle incidences of harassment, threats, and violence. Developing emergency procedures and improving intervention training for city employees and securing officers can decrease the likelihood an incident occurs as well as provide assurance to employees.

Of course, incidents do not always occur at city hall with 35% of surveyed officials reporting experiencing harassment, threats, and violence off the clock. Cities and individuals should take legal action where appropriate and necessary and consult with legal authorities about what speech is protected and what is not.

The NLC report recommends training for police officers and security officials at city hall that focuses on de-escalation, adding security protection to council meetings and public events, making infrastructure adjustments like metal detectors, and debriefing all stakeholders after events to discuss what went well and what did not in terms of civil engagement.

Promoting mental and health and well-being can also lessen the psychological trauma experienced by these incidents. Public officials who are being targeted in particularly should seek individual help from mental health professionals. In the event of a large-scale incident that involves multiple members of city staff, cities should also be ready to effectively manage trauma. This is important to support morale, prevent turnover, and keep employees healthy.

Instituting a trauma management strategy and ensuring staff have mental health resources can be effective measures to show city employees and officials that their concerns are being addressed and their mental health supported.

Improving civil discourse and fostering a more civil society is also an important task for government officials on all levels. Denouncing offensive and violent rhetoric, adopting codes of conduct for public meetings and events to post for citizens, and creating codes of conduct for social media use by elected officials can also improve civility. Engaging with the community and building relationships that promote civil discourse are also import.

By modeling civil discourse, engaging with the community, promoting codes of conduct, and developing social media guidelines, city leaders can also be leaders in civility.

To read the full report and for additional resources on tackling these issues, click here.