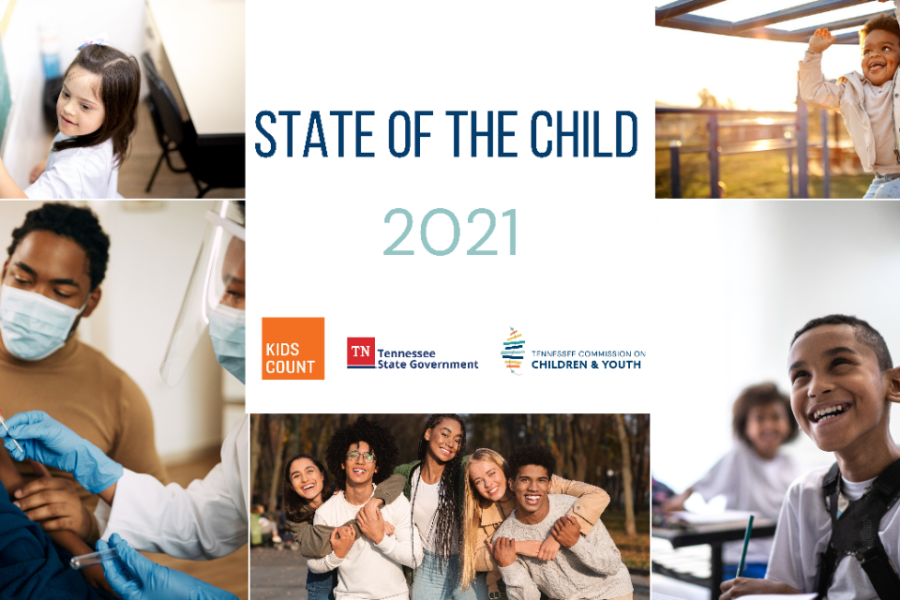 How the pandemic impacted housing stability, nutrition, educational outcomes, mental health, and overall health are among the topics highlighted by the Tennessee Commission on Children and Youth’s 2021 State of the Child report.

Working with partners including the national Kids Count data center of the Annie E. Casey Foundation, the state report collects various data to provide a yearly snapshot into the well-being of Tennessee children.

Racial demographics in the state have remained largely the same with 64% of children being white, 19% black, 10% Hispanic or Latino, 4% multi-racial, 2% Asian, and 1% native or indigenous. An estimated 1 in 8 Tennessee children are part of an immigrant family and 1 in 10 speak a language other than English at home.

The report found that children in the state “will likely face long-term challenges from the physical, social, educational, and economic impacts of the COVID-19 pandemic.” The report found that cases of COVID-19 increased as students returned to in-person learning with child cases peaking in August and September 2021.

“As children went back to full-time, regular school schedules for the first time since the beginning of the pandemic, their cases rose to their highest point yet,” the report found. “In-person schooling is beneficial to child development but mitigation efforts must be made to ensure it does not risk their health.”

“Tennessee families struggle to find quality care for their young children,” the report said. “Only one in three child care providers in Tennessee are licensed by Tennessee Department of Human Services or Department of Education. Even fewer, 1%, of those licensed have national accreditation.”

There is a gap of $16,018 between actual child care costs and what is current subsidized. If child care subsidies were increased, an additional 382,068 children could be served. This lack of early childcare not only has negative impacts on the economy but also on early education and success for children.

“The high cost of child care impacts caregivers, business and taxpayers,” the report found. “High-quality child care is instrumental in supporting child development, but the costs put it out of reach of many Tennessee families, even those with both parents in the work force.”

While the rate of children in early childhood intervention services has steadily increased over the past decade, approximately 60% of children aged three to five are not in school – one of the highest rates in the country.

“High-quality early childhood education can support the development of social and emotional skills while increasing school readiness,” the report found. “The greatest benefits occur in children who are living in poverty yet they are the least likely to be enrolled in early childhood education programs. Despite the enhanced return on investment, Tennessee is not significantly investing in children birth to age 5. Estimated total spending on children under five years of age accounted for 13.9% of all state expenditures for children in Tennessee in FY 2019-20, while children under age 5 were 27.1 percent of all children in the state.”

The pandemic has also put numerous stressors on children and families, creating disruptions to housing, finances, food and nutrition, health, and welfare.

“When caregivers are financially strained it can increase stress and parental mental health challenges,” the report found. “Supporting caregivers who are experiencing financial difficulties cannot help provide the supplemental resources that support healthy development such as books, enrolling in sports or other extra-curricular activities.”

The report found one in five children in Tennessee are living in poverty, which can have long-lasting and far-reaching consequences in their future development including educational gaps, environmental toxins, unsafe physical spaces, and chronic health challenges throughout their lives. During the pandemic, federal child tax credits became a lifeline for many families with 60% of households with children receiving these payments. It is estimated that this credit lifted one in seven children out of poverty or severe poverty during the pandemic.

The majority of child tax credit funds were used to pay down debt (38%) or spent (37%) while only a quarter of families could save these funds. Of those who spent their funds, 56% used the credit to buy food followed by 34% using it for clothing and 36% for school supplies. Paying rent or mortgage, utilities, and transportation were also among top categories where child tax credit money was spent.

Housing instability is another concern exacerbated by the pandemic. Those with a high housing cost burden – defined as spending more than 30% of their monthly income on housing – is forcing parents and caregivers to make tough choices when it comes to providing for their children, sometimes going without food, clothing, medicine, and other needs to keep a roof over their heads. More than one in four Tennessee children live in a household with high housing cost burden while more than half live in a household that could face eviction or foreclosure in two months.

“Neighborhood poverty has far-reaching implications for numerous economic, social, and health outcomes. High-poverty neighborhoods can limit economic opportunity and mobility, making it difficult for subsequent generations to accumulate wealth,” the report found. “Tennessee struggles to provide accessible, affordable housing to many of its residents; even while a large percent of those with high housing cost burdens are actively participating in Tennessee’s workforce. There is currently a shortage of 116,172 affordable and available rental homes for extremely low-income renters in Tennessee.”

While the percent of Tennessee families receiving food and nutrition assistance has decreased over the past decade, 47% of Tennessee students still participate in a free or reduced lunch program at school. A further 69,000 students – more than one in four – did not have enough to eat but still did not meet qualifications for these programs.

“Children’s brains are developing rapidly and forming critical neural connections that lay the foundation for the rest of their lives,” the report found. “Lack of proper nutrition can permanently impact a child’s brain architecture affecting their future learning, social interactions and long-term societal productivity. Children with inadequate nutrition are at greater risk for immediate and long-term health conditions.”

“The pandemic disrupted many aspects of access to health care coverage,” the report found. “As we move forward, it is important to ensure that children and their caregivers have the health care they need. If children are eligible for TennCare or CoverKids, outreach efforts should communicate that eligibility in an easily accessible way. In 2019, over 53,000 Tennessee children remained uninsured even though they were eligible for CoverKids or TennCare.”

As pandemic protections end, the level of uninsured children is predicted to rise.

“Tennessee currently has 12-month continuous eligibility for CoverKids, allowing children in that program to maintain health care coverage for a full 12 months after enrollment despite temporary fluctuations in their caregiver’s income,” the report found. “Due to the COVID-19 Public Health Emergency, this eligibility has been extended to all Medicaid recipients. After the pandemic, children with TennCare coverage will not have this protection and will be more vulnerable to coverage gaps. To ensure coverage for all youth, Tennessee should implement 12-month continuous eligibility for TennCare.”

Dental care also remains a concern with one in four Tennessee children not receiving preventative dental care in the past year. An estimated 1 out of 9 children in Tennessee are living in communities without water fluoridation, which can prevent cavities and tooth decay.

“Community Water Fluoridation is a safe, equitable and cost-effective way to support oral health across a community,” the report found. “The mineral fluoride is naturally occurring and is released from rocks into water. While frequently the level of fluoride is not enough to prevent tooth decay, certain water sources can have naturally high levels of fluoride. Community Water Fluoridation is the process of adjusting the amount of fluoride drinking water to a level recommended for preventing tooth decay.”

Additionally, communities can save money in the long-run.

“The return on investment for Community Water Fluoridation is estimated to be $32 per person annually, or $20 for every $1.60,” the report found. “In addition to the immense economic benefit, it is found to decrease tooth decay by 25% in children and adults. In Tennessee, 88.9% of people are served by community water systems that are recipients of fluoridated water7 Tennessee ranks 14th in the nation and surpasses the national average of 73%. The U.S. has set a goal of 77% of the population to be served by 2030.”