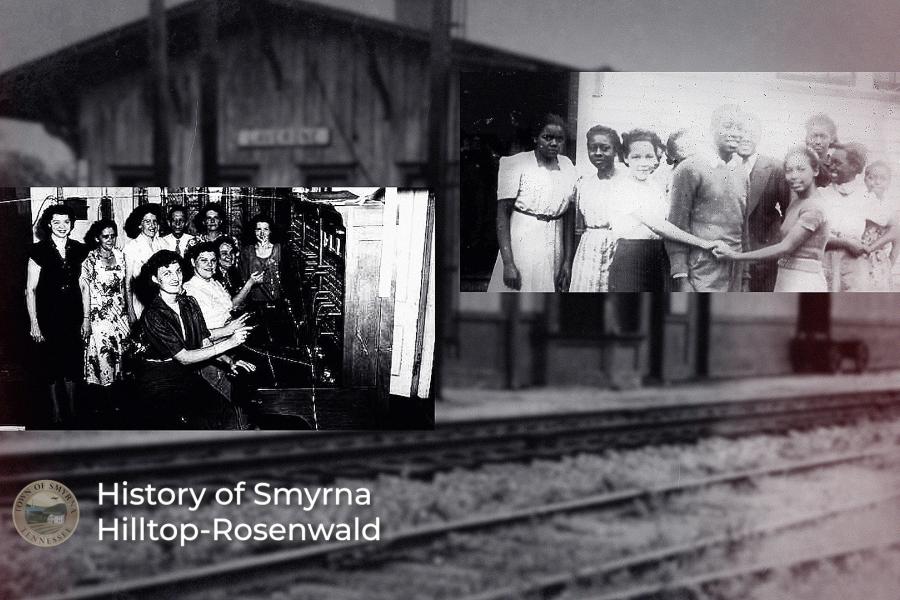 An image from the episode discussing the history of Smyrna's Hilltop neighborhood and Rosenwald school.

The town of Smyrna recently produced and completed a new, limited series preserving the community’s history through conversations with longtime residents. The History of Smyrna series is produced in-house by the Smyrna Media Services Department and will premiere eight episodes through August 2022.

“With the exponential growth we are experiencing in our community, preserving its history is extremely important,” said Mayor Mary Esther Reed. “The format of this series allowed us to capture the stories of those who shaped our community and pass that legacy on to future generations.”

The idea to preserve Smyrna’s rich history was an interest of Town Manager Brian D. Hercules, and after talks with Mayor Reed and local residents, the planning of a documentary series took off.

“I think it’s important to remember where we came from,” Hercules said. “Today we are a community of 54,000 people and really becoming our own city. For years we were seen sort as a step-child to Nashville or Murfreesboro. The mayor and council supported the project. We knew it would be more than one or two interviews. We needed to put meat on the bone so that people understand who we are and where we came from.”

To host the series, the town asked three longtime local residents to bring their voices and experiences to the program. Marion Appleton grew up in Smyrna’s black community and has been a longtime community leader and frequent face at town council meetings. Patsy Brown moved to Smyrna with her husband when he located to the U.S. Air Force Base. She has been a homemaker and volunteer in the community for decades. Kenneth “Coon” Victory is the father of Mayor Mary Esther Reed and has been a respected member of the small business community in Smyrna, owning a lumber yard and serving on number boards and commissions including the Smyrna City Council.

“We came up with specific topics for each segment -- like the depot district, athletics, and all aspects of the community,” Hercules said. “We helped guide them with the topics, but we didn’t get in the way. They did a great job of including people from all parts of the community. Everyone brought different aspects to the table that blended very well.”

The series chronicles Smyrna’s growth and evolution from a train depot stop to a town centered around a World War II Air Force base to a community without a major industry to the opening of the Nissan plant and the changes brought to Smyrna by the automotive industry. Episodes highlight various topics like the history of individual neighborhoods and schools, the business community, local athletics, local businesses, and the people who made these places memorable.

Each episode features between 10 to 12 local residents telling their stories like 96-year-old World War II veteran Charles Lee Williams. Hercules said one of the goals of the series has been to capture the stories of some of Smyrna’s oldest residents before they are lost. Filming locations have included city-owned locations and local landmarks like the Smyrna Airport, the Smyrna Depot District, and the Rosenwald Community Center.

In addition to being interviewed, participants brought their own pieces of Smyrna history.

“Some of the folks we interviewed came in with pictures, drawings and memorabilia,” Hercules said. “It was amazing to watch them remember those old days.”

After filming was completed in November, the town hosted a special watch party for those involved in making the series with each participant receiving their own Oscar statute to thank them for participating.

“This has been a fun project that has really engaged the community,” Hercules said. “The community has just been phenomenal; they love what we’ve done. It’s really grown into something that I don’t think anybody expected when we first started.”

The feedback for the project has been overwhelmingly positive.

“People appreciate that the town brought something to light that is going to be a part of our history. It prolongs our history. It has preserved our history. When you have the opportunity to talk with the founding fathers of our community and hear their stories, it’s amazing. It’s wonderful to see them light up when they talk about how proud they are of our town.”

Hercules said the city may continue to make a couple episodes of the series a year to create a further backlog of Smyrna history as told by local residents.

Those who want to watch the History of Smyrna series can do so on the town’s YouTube channel or live from the town’s website.