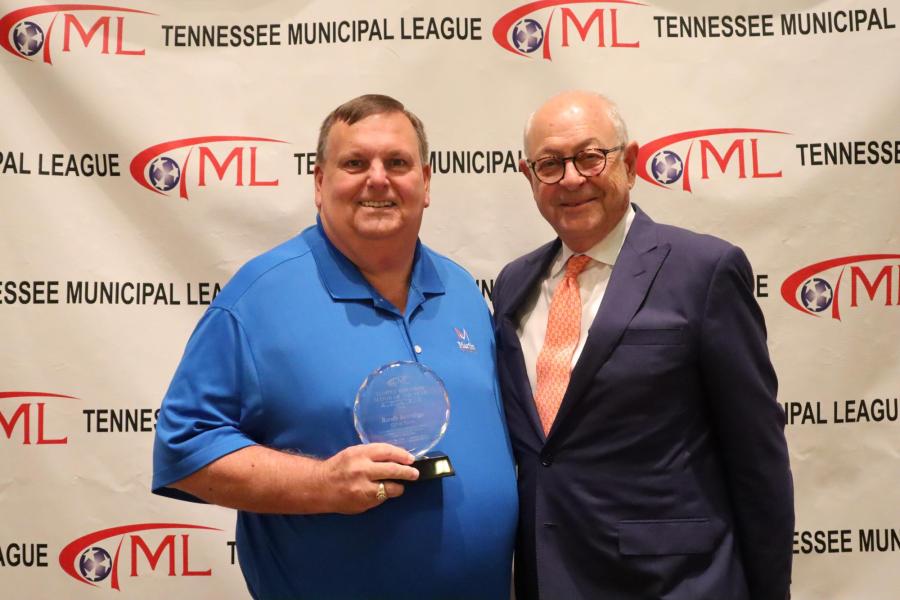 Martin Mayor Randy Brundige was named the 2022 Mayor of the Year by the Tennessee Municipal League at their 82nd Annual Conference in Gatlinburg.

Each year since 1954, the Tennessee Municipal League has honored a city mayor that typifies the attributes of intelligence, effectiveness, hard work, dedication, and sacrifice.

In recognition of his ability to protect Martin’s historic assets while providing Digital Age, evolved city services, and leveraging the resources of a rural, local governments limited budget to make new and innovative opportunities available for citizens, TML is proud to announce Martin Mayor Randy Brundige has been selected as the 2022 Mayor of the Year.

Presently in the fourth year of his fifth term, Brundige has a background in budgets, sales, markets, and providing efficient services from his career in livestock sales and auctions. Under his leadership, the city of Martin has undergone major changes, many of which have been financed by more than $50 million in grant funds for new infrastructure and economic development projects.

As a result of these investments, almost every building in the district has seen renovation with destination restaurants and retail stores opening up. Local citizens are proud to proclaim “Martin doesn’t look like it used to” because of how these investments have transformed their city center into a vibrant, thriving district.

Another major investment has been the sidewalk and pedestrian lighting project that connects residential areas, the heart of the city, and the campus of the University of Tennessee at Martin. This connection has helped improve health outcomes and better-connected citizens with the city. These investments include 10 phases of sidewalk pedestrian infrastructure, expansion of the greenway, and the planting of more than 300 new trees. Other important infrastructure upgrades include eight phases of a major water/sewer infrastructure project, a new electric vehicle charging station, and a new splash park.

Ensuring that the rural community of Martin has the same technological opportunities as larger communities has been one of Brundige’s priorities. He led efforts for Martin to be one of the first rural cities in the state to provide 1G fiber capability to every residential home and business in Martin. The city has also buried several miles of overhead electronic lines.

Industrial investment has been another focus of Brundige’s. He instated the Martin Industrial Development Board that has focused on recruiting major companies to locate in the city. This includes the city’s biggest employer, Stanley Black and Decker, as well as their first foreign-direct investment through South Korean-based company DongA-USA. Other major investments include FE Rail, Elgin Fasteners, and USA Pallet Source Infrastructure. Planning is also in place for a new industrial park in Martin.

Outside his work for the city of Martin, Brundige has served two terms on the Tennessee Municipal League Board of Directors, three legislative sessions on the TML Municipal Advocacy Committee, and is currently the vice chair of the Public Entity Partners Board. He is a charter member of the Ken-Tenn Regional Economic Development Alliance, and is a graduate of the WestStar Leadership Program and Tennessee Institute of Public Officials. He also serves as a member of Rotary, the Northwest Tennessee Rural Convention Group, the Carl Perkins Center, the American Public Gas Association, the Weakley County Economic Development Board, and the Municipal Training Academy Board of Directors.

An alumnus of the University of Tennessee at Martin, Brundige and his wife Sandy are the parents of two daughters and grandparents of two granddaughters.