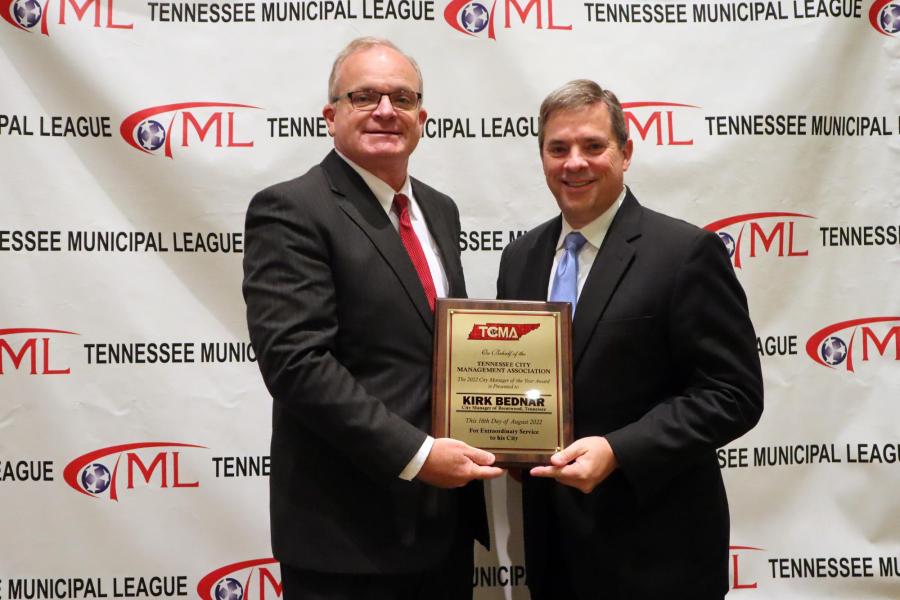 The city of Brentwood has been incorporated for 53 years, and for the past 22 of those years, Kirk Bednar has been one of the most familiar faces of city government.

Hired as Brentwood’s assistant city manager in 2000 and selected as its city manager in 2013, Bednar’s role with the city of Brentwood extends far beyond his city manager’s office to include participation in local civic organizations, state and national roles, and numerous awards for his work in public service and advocacy for municipal management.

It is for this reason that the Tennessee City Management Association (TCMA) has recognized Kirk Bednar as its City Manager of the Year for 2022. Bednar was presented the award at the 82nd Annual Conference of the Tennessee Municipal League held in Gatlinburg.

A native of Streator, Ill., Bednar’s hometown was the place where his career in public service began. After graduating from Augustana College with his bachelor’s degree, Bednar served an internship as part of his graduate program for his master’s in public affairs from Indiana University. After obtaining the degree, Bednar took a position as a management intern for the city of Fort Worth, Texas, where he worked for six years.

Bednar then took a job with the University of Tennessee’s Municipal Technical Advisory Service (UT-MTAS) to provide technical services and consultation to municipalities throughout Tennessee. For his work, Bednar received the MTAS Trailblazer Award in 2000 for maintaining service to municipalities in Middle Tennessee during a time of several MTAS staff vacancies as well as providing a new level of support for TML and Tennessee cities.

During his tenure with the city of Brentwood, Bednar has been involved in numerous programs, projects, and initiatives for the betterment of the city and its citizens some of the most notable include the recent new Brentwood Police headquarters, the Windy Hill Park project, the city’s inclusive playground at Granny White Park, a Next Generation 911 program, and the city’s Marcella Vivrette Smith Park.

The $29 million, state-of-the-art Brentwood Police Headquarters is the single largest capital project in the city’s history and provides a two-story, 56,000-square-foot facility for policing, including a 2,200 square-foot-municipal court facility. Williamson County also hosts an ambulance team in an ancillary structure on the site.

Brentwood worked with state emergency officials for the Next Generation 911 (NG911) service that delivers more features for wireless callers including text messages, video, and transmission of information from vehicles to 911 centers during an accident through telematics.

Through a partnership with the Rotary Club of Brentwood, Granny White Park has become home to a $1.7 million, 22,000-square-foot inclusive playground with plans for a second inclusive playground in the works for the city’s Crockett Park. Bednar also oversaw the opening of the city’s largest park, Marcella Vivrette Smith Park, which includes the restored 1825 Ravenswood Mansion, 400 acres of public use and enjoyment, a bridge over the CSX railroad, and a major event venue that brings revenue into the city. The $5.2 million, 52-acre Windy Hill Park project is the next park on the horizon for Brentwood.

Other recognitions Bednar holds include graduating from the Brentwood Citizens Police Academy, appointed as a commissioner with the Commission on Accreditation for Law Enforcement Agencies (CALEA), member and past president of the Brentwood Morning Rotary Club, and graduate of the Weldon Cooper Center for Public Service Senior Executive Institute at the University of Virginia.

Beyond bettering the city of Brentwood, Bednar works both for his own continued professional development and to advocate and improve the city management profession at large.