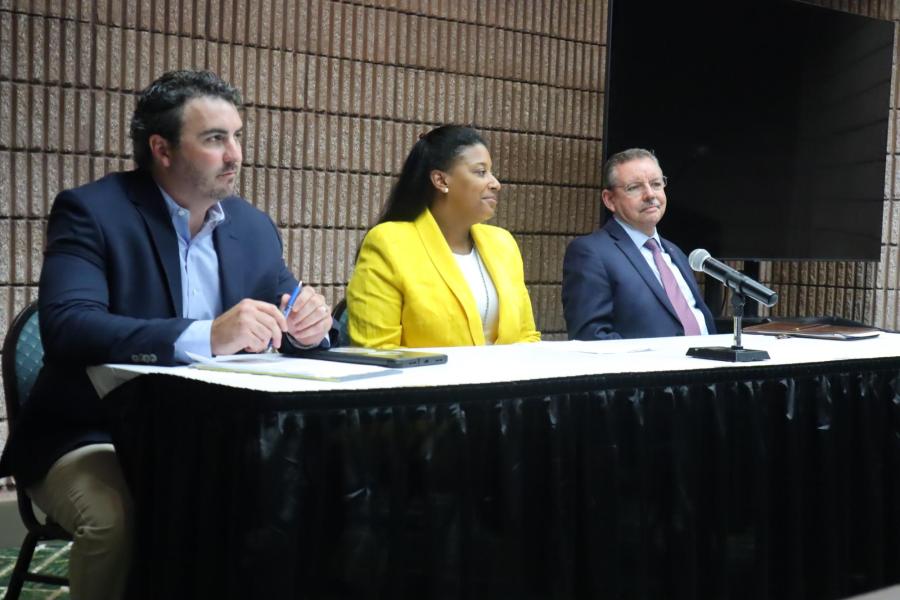 With prices putting homeownership out of reach for healthcare workers, teachers, police officers, firefighters, and other government employees, housing affordability is a topic being discussed in numerous municipalities across Tennessee and the nation.

A panel of officials involved in housing and related issues spoke at the Tennessee Municipal League’s 82nd Annual Conference in Gatlinburg about the challenges around affordable housing and how municipalities work with other stakeholders on these issues.

Ralph Perrey, executive director of the Tennessee Housing Development Agency (THDA), said housing shortages are making it harder to get mortgages, which in turn raises rents, making it harder for those of modest means to acquire homes close to jobs.

“While it’s certainly a very challenging environment for housing and homeownership right now, there are some things we can do together,” Perrey said. “American’s housing shortage hits hardest at the Tennesseans that THDA serves: first-time homebuyers of moderate to middle income and working people in need of decent and affordable rental housing. Fundamentally, what we are talking about is supply and demand. The American Association of Realtors’ Affordable Housing Index is at its lowest since 1989. There is less housing for sale or for rent today than at any point in the past 30 years, and we all know there is more demand. That is especially felt at lower-level price points or the lower end of the market.”

Michelle Gaskin Brown, public policy manager with Amazon, said two years ago Amazon created a $2 billion Housing Equity Fund to create and preserve at least 200,000 units of affordable housing in locations where the company has more than 500,000 or more employees, which includes their operations offices in Nashville. Amazon provides the funding source with the goal of creating housing that will remain affordable for 99 years. Half of the money has already been spent in three Amazon locations.

“The point of this fund is for us to partner with nonprofits, businesses, developers, and local governments to provide funding so they will be able to create and build affordable housing,” Brown said. “Affordable housing for us is anything between 30% to 80% average median income. We want to support some of the lower and moderate-income individuals and families to make sure they can live in a home in an area they want to with the understanding their wages may not match the cost of renting and owning a home today.”

One major issue the company has seen in the housing market is equity. In addition to working with minority-led developers and nonprofits, Amazon is working with local governments to ensure affordable housing developments go hand-in-hand with good schools and transit opportunities.

“A big part of our funding is to also relieve those transportation costs, which can take out a huge chunk of money from a paycheck each month,” Brown said. “We want to make sure all the properties we are partnering with have some close proximity to transit lines and transit centers. We recognize that there are a lot of local, state and federal things we have to overcome to move the needle. We realize we can leverage our company’s capital to provide those loans, grants, and low-market capital. We also pride ourselves in being able to scale up quickly.”

Through the program, Brown said Amazon officials have seen how costs are increasing on everything from moving dirt to prepare a site for construction to the final costs associated with moving a family into a home.

“Our main focus is what is affordable. We used to say if you work for Smithfield homes you can afford one of our houses. That is not true anymore. The cheapest you can get with Smithfield is $309,900. We used to sell them at $159,900 three years ago. The costs have gotten unbelievable, and a lot of that is out of our hands. As homebuilders we know we are in the risk business. We know supply and demand, lumber costs, and the economy can go up and go down.”

While the amount of homes THDA is building is up, Perrey said the organization is still doing less than it was able to before COVID because prices have risen. The recent economic downturn negatively impacted builders, which is making it harder to find the skilled labor needed for construction. In 2008, the Memphis Homebuilders Association had more than 1,500 members and now, even after merging all West Tennessee homebuilders’ associations into a single organization, there are only 562 members of the group.

Inflation is another contributing factor that is making homeownership harder. Perrey said the average mortgage through THDA programs is $187,000, which is up about $30,000 than it was two years ago. The average lender is paying $300 a month more than those who received loans last year. With more people unable to afford homeownership, more people are also looking to rent which Perrey said is driving up rents.

“Everywhere in our state we need to build more housing for purchasing, more housing that is going to be affordable for workforce,” he said. “This is hard to do because buildable land is expensive and hard to find. Materials cost more and even if you manage to get them, there is no guarantee you will get them in time. Skilled labor is in short supply, and you pay up for it.”

One problem Sanderson said builders are also encountering is a shortage, both in the trades they need to build homes and in the number of inspectors needed to approve permits.

“Another thing we are running into is that – because of the labor shortage – municipalities don’t have the inspectors,” Sanderson said. “When we call for a plumbing inspection, it can be 14 days out or even three weeks out. We can’t wait three weeks for an inspection. That labor shortage is only going to get worse. One suggestion is penalizing and incentivizing us. So, if I call out for a framing inspection and my framing isn’t done yet, I get penalized for wasting the municipality’s time. I’m all about setting up rules and regulations that help the guys who know what they’re doing and penalize the ones who are sloppy and wasting time.”

Sanderson said costs can also go up as a result of changes requested by municipal planning commissions in order to approve building projects, and he said builders often find it frustrating when city employees recommend moving forward with a project only for city boards to vote it down without understanding the implications that vote could have.

“There is a lot that goes into it, and one change here or one change there results to dollars being passed down to the homebuyer,” he said. “The homebuyer is hurting right now. We are having to subsidize our homeowner’s associations because they cannot afford to pay for the ponds that have to be done for stormwater. When you are nickel-and-diming homebuyers who are scraping together pennies to come to the table, it makes homebuying harder too. Right now, we are losing a contract a day because they can’t close on the house or they can’t afford furniture or groceries as the cost of living goes up.”

Perrey agreed that, while they often have good intentions, regulations have negatively impacted organizations like THDA as well. Perrey said that Nashville’s Habitat for Humanity is struggling to build homes for the less than $300,000 ceiling price tag it usually offers.

“A lot of requirements communities have put in place are well intentioned and there is a good reason for each and every one of them, but when you layer them on top of each other there is a substantial cost,” he said. “You may want to ask if all of those things are necessary on each and every development and have a little flexibility.”

Sanderson said what may seem like a small fee here or there can add up, making the homebuilder pass on the price of these permits to the buyer.

“What we can control and want to control are the regulations,” he said. “The two-by-four we use in California is the exact same size we use in Tennessee. The only difference in cost is the amount we have to pay in regulations and the price of the land. The state of Tennessee made it affective July 1 that the way we transfer the land has a $200 transfer fee. When you build 400 houses, that’s $80,000 a year.”

Perrey encouraged municipal officials to take a look at regulations they have in place and see if there is any room for flexibility to help facilitate builders who want to make affordable homes.

“Think about your land-use and zoning requirements. Think about if you have city-owned properties and if you could make some of that available to those wanting to do long-term, affordable developments,” he said. “Think about how your community feels about higher density housing, such as duplexes, townhomes, and those 12-unit garden apartments. Think about manufactured homes like the cross-mod development Clayton Homes is offering outside of Dandridge that are built in two or three months. In some places where you have an employer come in and need housing, this may be an option. Think about how rapidly you can get permits to build something. Time is money.”

Educating the public on what affordable housing is – and especially what it isn’t - can also help.

“I know this can be a politically difficult thing, because when a lot of people hear you talk about affordable housing what they’re picturing is the projects,” Perrey said. “The prerequisite to a lot of these changes is what I call getting the talk right. You have to paint a better picture of what you’re building, where it is, and who is going to live there.”

With State and Local Fiscal Recovery Funds becoming available, Perrey said cities could consider using some of those funds to support housing development.

“A lot of the developments we at THDA have funded are done with bonds, tax credits, and grants,” he said. “Costs have gone up, and just getting the thing built has funding gaps. Your federal funds may help bridge those finished projects that we have already funded in your communities. We would be glad to help you identify those projects in your communities.

“Among other things, it would increase by 50% the amount of housing tax credits our agency has to administer,” he said. “It also makes a change in the bond program that would also let us fund at least 50% more housing developments with bond capacity. This bill actually has substantial bipartisan support.”