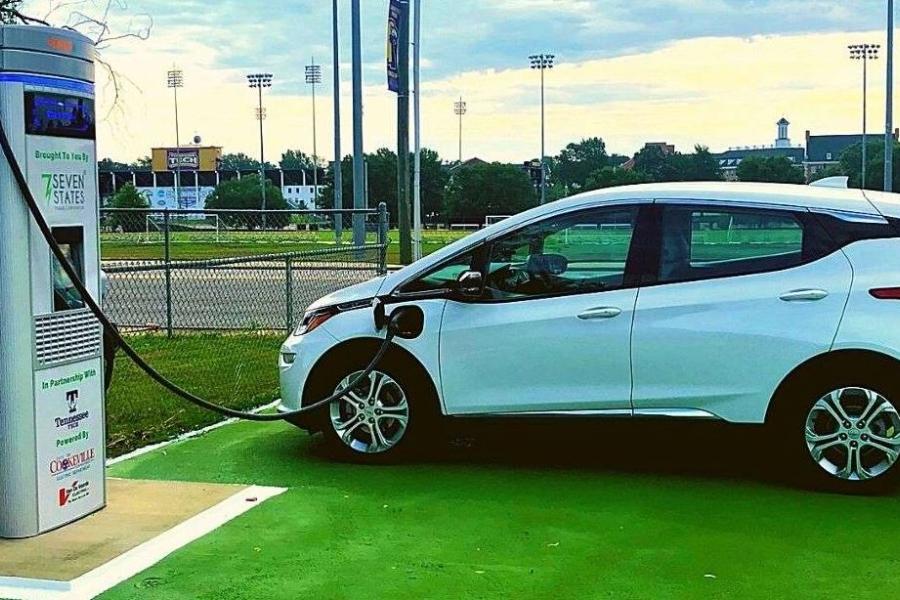 A vehicle charges at the one of the EV charging stations on the campus of Tennessee Tech University in Cookeville.

With electric vehicles rolling off the assembly lines of all four major automotive manufacturers in the state of Tennessee in coming years, building support infrastructure to allow Tennesseans to use these vehicles is a major priority.

“Through that road mapping initiative with Drive Electric TN, we also came up with a list of 40-plus projects we could be working on to help drive that EV adoption throughout the state in a number of areas, whether that be supportive policies and programs, developing infrastructure, and driving education and awareness,” Voytek. “TVA kickstarted in 2019 a statewide electric charging infrastructure needs assessment. Basically, this was a way of taking stock and inventory of the existing charging infrastructure publicly available, looking at the state of operability of that infrastructure, and then thinking through what the gaps are that we needed to build out to meet that 200,000 EV population.”

A partnership between TDEC and TVA has identified the major corridors needed for the fast-charging network and is working to fund the development of those. Approximately 40 sites will be developed as part of the plan.

“We also overlaid that with our economic distressed and at-risk counties as well as the locations of our state parks to see what corridors run through those and can help bring economic development to those regions,” Voytek said. “The Fast Charge TN network is essentially leveraging two funding sources. On TDEC's side, we are leveraging the Volkswagen Settlement funds and have allocated $5.2 million toward that. TVA is bringing additional funding to the table.”

With the National Electric Vehicle Infrastructure Deployment Plan New being approved as part of the recent federal infrastructure act, Meservy said there is more funding coming down the pipeline for this project.

“We are going to receive a $4.2 billion funding pot for the next five years,” he said. “These funds will be used primarily for the first round on the designated corridors. IN Tennessee, those are the double-digit interstates – except for Interstate 55 in Memphis – plus the U.S. 64 that connects Memphis to Chattanooga. That is where the funds have to be used first and foremost.”

Meservy said that any other federal funds available after this build-out can be used on publicly accessible land and may have similar requirements to alternative fuel corridors plan. Universal plug types and spacing requirements also have to be met under the federal funding guidelines.

At present, there are 1,500 miles of eligible corridors needed for build-out of EV charging networks with each site costing $1.5 million. Four charging stations able to pull 150 kilowatts simultaneously are also part of minimum requirements from the federal funds.

As part of looking into what infrastructure is already in place, Voytek said officials are looking at how the need for charging will change workplaces, multi-family housing developments, individual dwellings, and public or community properties as well as fast-charging corridors. Voytek said 90% of EV charging takes place at the vehicle owner’s place of residence, but fast-charging networks are needed for road trips and other forms of long-distance travel.

Additionally, Voytek said the state has partnered with EV developer Rivian, who is donating level two charges to all 56 state parks at no cost to the state. The company will operate and maintain those chargers for the next ten years with 26 operating by the end of September.

Meservy said another part of building EV infrastructure is making sure it stands the test of time.

While most chargers at present are pull-in-, pull-out models, Meservy said the development of trucks, like those to be built at Ford’s Blue Oval plant, mean that charging areas will have to be able to accommodate vehicles hauling boats, trailers, and other equipment. Power may also need to be up as EV usage increases.

“Tennessee touches a lot of other states,” Voytek said. “As we build out interstate corridor infrastructure in particular, we are wanting to make sure we aren’t installing infrastructure right at the border only for there to be duplicative charging infrastructure right on the other side. We have formed a group called the Southeast Regional Electric Vehicle Information Exchange that meets monthly. It is essentially officials from all our state energy departments and DOTs along with Puerto Rico and the U.S. Virgin Islands. We are all discussing our plans and best practices as we build out our infrastructure.”

Part of this initiative is a regional mapping tool that is publicly accessible to help guide the location of EV infrastructure at different sites in a way that interconnects.

One major goal toward the development of electric vehicles in Tennessee is education of the public.

“We are lucky to have a pretty robust ecosystem of partners who are helping us in this space,” Voytek said. “The Drive Electric TN is now an initiative managed by a nonprofit out of the University of Tennessee known as the Tennessee Clean Fuels Coalition. They are doing a ton of work to drive consumer education. We also have two different USDA Clean Cities Coalitions that also work as technical assistance providers to consumers, local governments, and public and private fleets looking to transition to electric vehicles.”

“Typical fast charger systems take about 20 minutes to get to a roughly 80% charge, so there are instances where if you want a charge you may have an opportunity to go out and visit the area you are in,” he said. “Future ideas also have to do with having additional chargers if the demand is great. The local power companies are coordinating infrastructure to futureproof those.”

Voytek said that work is also being done to ensure Tennessee’s electric infrastructure will also meet the demands for electric vehicles.

“TVA is one of the biggest advocates of electric vehicle adoption, because for a while they were seeing their projected load growth as being flat if not declining,” she said. “For them, this is a new way of selling and generating electricity. This is something they have been looking at for years now, as far as modeling and looking at the electric grid. Interestingly, TVA found if every vehicle in the entire Tennessee Valley Region - which includes seven states, not just Tennessee – became electrified over night the impact to the grid would be less than it was when air-conditioning was adopted after World War II. Obviously, we don’t expect every vehicle to transition overnight; it’s going to be a phased approach. They are working hand-in-hand with local power companies who will oversee it on the distribution side. These funds are helping to cover those infrastructure upgrade costs.”

At this point, Meservy said the plan has unlocked available funds for the development of the EV charging, but there is still a journey ahead to make this network a reality.

“We still have a long way to go,” he said. “It is not to where we have specific locations. We don’t know exactly who we are going to be contracting with. The feds are giving us approved documents to work on standards to make sure we know how to prioritize locations if we have multiple sites competing for a location. The Federal Highway Administration will approve those funds by Sept. 31, and in the meantime, we are going to work on how we will get these funds out for implementation, developing standards, and make sure we have covered all of our bases for our goals and associated risks. Hopefully, if everything goes right, by June of next year we should be releasing and awarding contracts.”