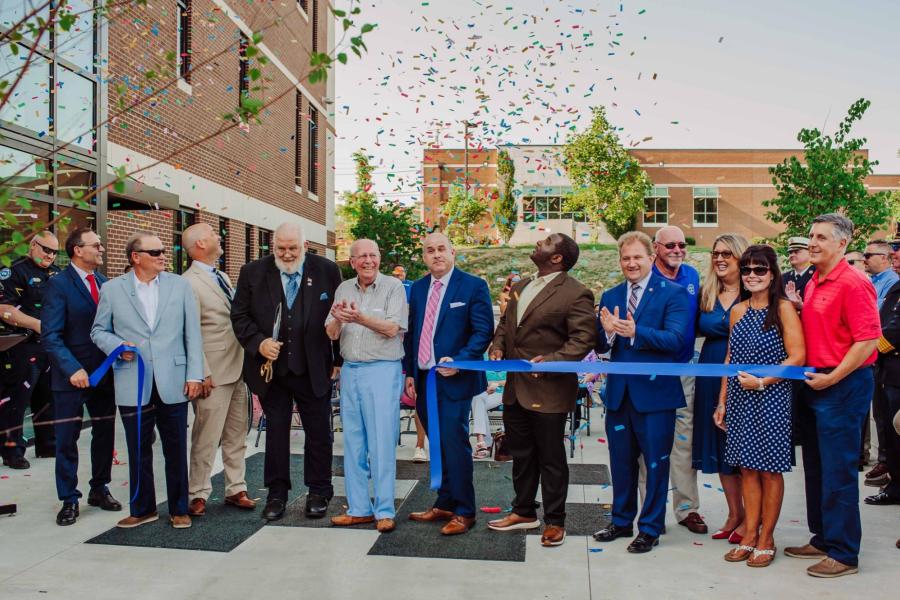 White House officials celebrate the grand opening of the municipal complex earlier this year. The project was made possible through a $11 million fixed-rate bond from the Tennessee Municipal Bond Fund, who is also financing the $24 million recreation center.

Increased growth of their community led municipal officials in the city of White House to spearhead a project that would bring city employees, elected officials, and citizens closer together in a new municipal complex.

The Billy S. Hobbs Municipal Complex and Community Center is a three-story, 26,000-square-foot facility that includes a new senior center, a new municipal board room, and offices for the city’s parks, administrative, finance, planning, and human resources offices among numerous other amenities. Like the previous municipal structure, the new complex is named after White House’s inaugural mayor who served for 26 years with the city in addition to 26 years as principal of White House High School, 14 years as a Sumner County Commissioner, and four years on the Sumner County School Board.

Kevin Krushenski, TMBF marketing representative, said the bond fund has enjoyed seeing how the city of White House have taken these funds and developed them into not only brick-and-mortar buildings but also into a sense of community.

“White House is a prime example of how great things can happen in a community when shared vision, strong leadership, and fantastic staff work together to make investments that improve the quality of life,” Krushenski said. “It’s been the Tennessee Municipal Bond Fund’s honor and a privilege to work with the White House Board and staff to help finance their city center vision. On behalf of the entire Bond Fund, we look forward to seeing White House’s wonderful future.”

White House Administrative Services Director Derek Watson said the new municipal complex and community center are just part of a campus of city structures in a campus-type setting, which echoes back to the original high school on the site. In 1989, the former high school took on a new role as White House City Hall after the city purchased it from the school board for around $100,000.

The renovations to the former high school property – as well as the city’s partnership with TMBF – go back to a library project in 2013.

“Our city hall was in an old high school campus that was built in the 1940s,” Watson said. “It had some open fields. In 2013, we built a brand-new library on the campus with the Bond Fund in 2013. When that finished up around 2015, we added a splash pad, then doubled the size of the splash pad, added a pavilion, restroom facilities, an amphitheater, and we were getting grants along the way. We had a master plan for the whole property that called for building a new rec center and taking the existing facility to modify it into a new community center that would house administrative offices.”

However, early due diligence work on the site determined city officials would have to adjust their future vision of the municipal campus.

“When we did sample borings around the building, we found that we were sitting on karst and sinkholes starting in the ground,” Watson said. “We realized we had to shift gears a little bit. We went to the Bond Fund for $11 million to build a new community center on the property. We redesigned it to be a three-story building.”

The rate from the Bond Fund was able to provide White House security despite what could have been seen as a major setback in the project.

“The Bond Fund was so pleased that our fixed rate draw loan program and the ability to not pay interest on the entire loan amount up-front was able to save the city and taxpayers a tremendous amount of interest expense during that uncertain construction period,” Krushenski said. “White House managed a very difficult situation and turned it into a positive outcome.”

In addition to serving as home to the city’s administrative, finance, human resources, parks and recreation, and planning offices, White House City Administrator Gerald Herman said the new building is a place for local residents to gather.

“The community center has more meeting space for the community with a warming kitchen for catered events, a projector for meetings and presentations, and houses the senior center,” Herman said. “The seniors do a weekly Wednesday lunch in the community room. When we built this, we also wanted to make sure we had a facility where our chamber of commerce could hold dinners and events. This community room can hold 190 people. The other day we had a job fair. This was a facility we definitely needed for our community because there was nowhere else with a like-size facility.”

The community room has already proven a big hit with major plans for future events including senior dances, family reunions, wedding receptions, baby showers, and other public gatherings on the horizon.

The first-floor of the new facility is focused on more public access with the community center, the parks department offices, and senior center located there. The remaining city offices are located on the second and third floors of the building with the new city boardroom on the second floor.

“It also has a really nice boardroom,” Herman said. “Our previous facility could only hold about 45 people and this one can hold 90.”

The new boardroom also has safety glass and incorporates new technology with monitors for the audience and individual board members to follow along with presentations and information, a new mic system and camera system that allows for livestreaming of municipal meetings.

“The gym goes all day long from seniors walking in the morning to open gym for kids to use in the afternoon,” Hermann said. “It’s where our rec teams play volleyball and basketball, so there is always something going on. We knew we had to figure out a way to keep that going. We obtained a $24 million loan from the Bond Fund to build a new rec center. Once we finish the new rec center, we will tear down that old gym.”

The 72,000-square-foot new recreation center will help accommodate the wide variety of activities White House residents participate in without the crush sometimes caused by limited space in the old facility.

“Our gymnasium can only have one basketball game on at a time, which hurts our rec programs,” Herman said. “We have to start early and the kids can be here until 9 or 10 at night finishing up their practices or games. The new facility will have two full-sized courts so we can have multiple practices on half court. There will be a walking trail around the top of the gymnasium. There is also going to be a multipurpose room that will be lined for basketball, volleyball, and two pickleball games. There is also going to be a wellness center with free weights and cardiovascular equipment.”

Another amenity in the rec center will give it a unique offering.

“We’re doing something kind of out of the box for cities, and I’m not sure anyone else is doing it,” Watson said. “We are going to have a gaming area for folks with Xbox, Playstation, and those types of games. We know eSports are popular, so we want to have that kind of space. We are also talking about some old-school arcade games and maybe a pool or ping pong table.”

The new buildings are still located in an area important to the history and the name of White House. While the city was only incorporated in 1971, White House’s history dates back to the 1820s and was named for a white, two-story house built in 1829 that was a popular stop for lodging, food, and changing horses on stage lines.

The original house was destroyed in 1951, but a replica stands as a museum and Chamber of Commerce. The historic turnpike that brought so many travelers through White House became U.S. Highway 31 West, and still serves as one of the city’s major thoroughfares. In fact, the new White House municipal complex is located on Carmack Drive, just one block down College Street from its intersection with Highway 31.

While new facilities have replaced the former school building on the site, the complex still retains a campus-like atmosphere and is connected via walking trails to the White House Public Library, the city’s splash pad, a playground, and the outdoor Fran Huston Amphitheater.

“We’ve got all the buildings with similar brickwork and the walkability gives it a feel like a college campus,” Watson said. “We don’t really have a true town center. We have commerce along the roads that come through our city center, but it’s not a traditional downtown. We were told that if you bring moms and babies into a town center, you will get shops. So that is one of our goals. By doing that with the splash pad, playground, rec center, and senior center, we are starting to bring more people here and we are seeing business growth reflecting that.”

Herman said the municipal campus has a positive impact for both residents and municipal employees.

“Our population was 8,000 in 2008 and now we’re pushing 16,000 people,” he said. “That means a growing demand for city services. It makes it pretty easy for us to go down a flight of steps and be in the finance department. I can go downstairs to the planning department and have a planner bring out plans for me to look at. We have internal hallways to get to each other, which is really nice.”

It also gives city employees a chance to be involved in city life.

“The splash pad is always busy, and some of our windows face that,” Herman said. “As soon as it opens at 9 in the morning --  it’s non-stop with kids there and at the playground. The community room and senior room are just across the hall. Whenever I get stopped by a senior in the hallway, they always want to talk about how much they love the facility. In the evenings sometimes when I leave work, even at seven or eight o’clock at night, there will be a big family gathering in the pavilion area, which is rented out constantly. There could also be an event in the community room like the job fair. It keeps us close to the public and what’s happening. I can walk out of the building and hear a band playing in the amphitheater.”

Watson said citizen feedback has been positive with many residents saying it is about time the city expanded its rec center.

“When people walk into the building they are always amazed,” he said. “People are glad to have such a nice city hall that represents White House.”

TDEC announces 11 cities to share in more than $34.5M in ARPA grants