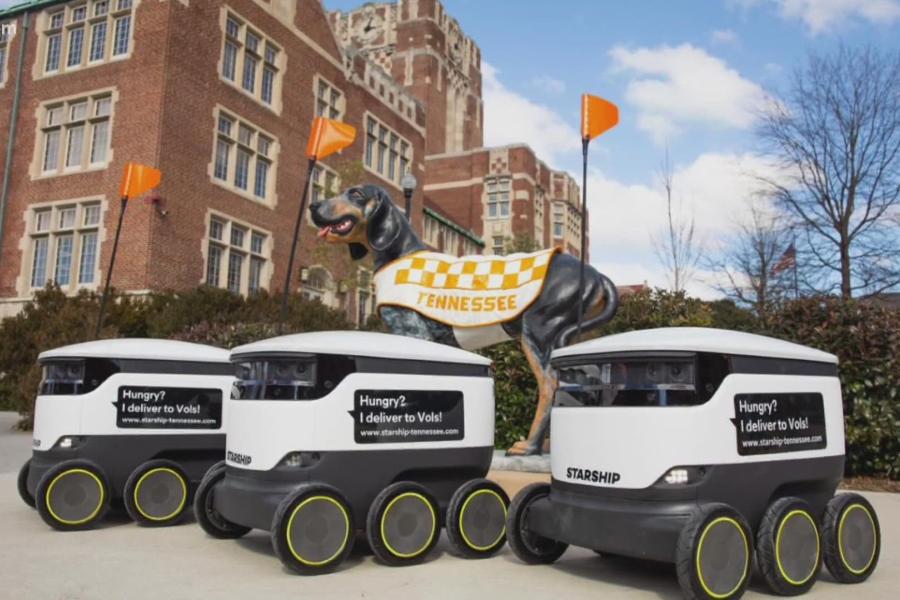 Food delivery robots, like these presently in use on the University of Tennessee at Knoxville’s campus, are redefining concepts of goods and services as well as the larger economy itself. With modest-skill workers in demand and their wages rising, companies may look to automation to fill the gaps.

The progress and growth of the Certified Municipal Finance Officer (CMFO), as well as the current and future of the state and national economy were among the topics covered at the second general session of the Tennessee Municipal League’s 82nd Annual Conference in Gatlinburg.

Dr. Bill Fox, special advisor to University of Tennessee Chancellor Donde Plowman, said one of the hot topics surrounding the economy is whether or not the country is in a recession.

“GDP has declined for two consecutive quarters, and as a rule of thumb, people have often said that is a recession,” Fox said. “My guess is we are not yet, but that’s not to say we won’t be. When you’ve created 528,000 jobs in the U.S. economy in July, it’s hard to imagine that’s a recession. The fact that jobs continue to grow and consumers continue to spend likely mean we are not in recession.”

“As long as consumers keep spending, we won’t have a recession,” Fox said. “Consumers were also given a lot of money, and some of it is still sitting there in their savings accounts. One good way to track that spending is to look at the Tennessee state sales tax and your local sales tax to see are people still spending.”
There is a risk of a recession and smaller GDP growth both in this year and next, but Fox said job growth and creation in Tennessee is back to where it was in 2019. The state continues to do well in both 2021 and 2022 in terms of job growth.

“Job growth has been strongest in the service sectors in our economy,” Fox said. “The service sector has done super. Manufacturing not so much, although we are a very strong manufacturing state, well above national norms. It is great that Ford is coming and adding to that and helping West Tennessee.”

Fox said it is also important to note that what we identify as goods and what we identify as manufacturing is changing, such as autonomous delivery rather than by person. Despite ongoing positive job growth, Fox said he wouldn’t be surprised if we started to see some gains in unemployment.

“If we have a recession and even if we don’t, we are likely to see the unemployment rate come back up some,” he said. “It’s not going to stay this low. The demographics are not suggestive that what we can have from here is a rapidly growing labor force to ease the tightness that we are feeling. The labor force participation rate plummeted during COVID. It’s mostly come back, except for young males, and this is an issue not only with labor force, but also an issue with higher education.”

A lot of economic trends we are seeing now were accelerated by COVID, like the downward trend in restaurants and in-person retail, an increase in working from home, technology replacing humans, and a reduction in the number of modest-skilled workers.

“Technology is tending to replace those modest-skilled workers,” Fox said. “Demographics have reduced the number of modest-skilled workers so much that their wages are going up. In Tennessee data, the 56 to 65 labor participation force crowd falls while the 55 to 25 crowd slightly grows. If you put that together, there is no growth in our labor force in this decade. Demographics do not solve this problem. We have a tight labor force no matter what going forward. Many areas in rural Tennessee saw population declines over the past decade, and the signs are not positive for that to improve from there. Natural population growth – which is births minus deaths – is very low in the U.S. If the U.S. population is going to grow, it has to be from immigration.”

Fox said that immigration can come from other states and draws like higher education may be one way to do that. If Tennessee wants to continue positive economic growth, Fox said it means upscaling education ranging from four-year university degrees to members of the workforce earning other types of certificates and certifications in the trades.

Inflation is another hot topic Fox said many economists are focusing on, and that it is not expected for prices to decrease.

“We actually don’t want prices to decrease,” he said. “If you think prices are going to go down, you don’t buy; you wait. You don’t want an economy where across the economy people are waiting to spend. What we can expect is hopefully for inflation to level out.”

While there are positives, Fox remained cautious in his overall economic outlook.

“The bottom line is the economy maybe will have a recession and maybe won’t, but we are hovering around weak economic growth,” he said. “We are going to see employment growth slowing down, only because we are running out of people to hire. Inflation rates will probably come down but remain too high for the next year.”

State Comptroller Jason Mumpower discussed the growth of the certified municipal finance officer (CMFO) program, noting that there have been 871 CMFO certifications issued since the program began in 2017 and 613 of those certified through the program have maintained their continuing education. Mumpower said that 289 cities also have at least one CMFO on staff.

“That is important,” Mumpower said. “We have seen success in this program, and we have seen financial improvement as a result of this program. Earlier this year, after several years of working on this, the General Assembly approved to include in the budget this year $1.5 million of non-recurring money for the CMFO program. This money is going to be used to incentivize participation in the CMFO program by allowing people who complete the program to receive a $1,000 stipend. The money is also being used to reimburse travel and expenses incurred when city staff are traveling for this continuing education.”
One major change Mumpower said city officials should be aware of is a new push for Tennessee cities to use the Comptroller’s uniform chart of accounts in their upcoming audits. The process will begin implementation for financial statements for June 2023.

“A uniform chart of accounts is simply a set of common account numbers to categorize various streams of revenues, expenditures, assets, liabilities, and fund balances,” Mumpower said. “There are, especially in this day and time when we manage our accounts by computer, many benefits to having a uniform chart of accounts, but it certainly makes it easier to compare data across cities regardless of size and geographic location.” 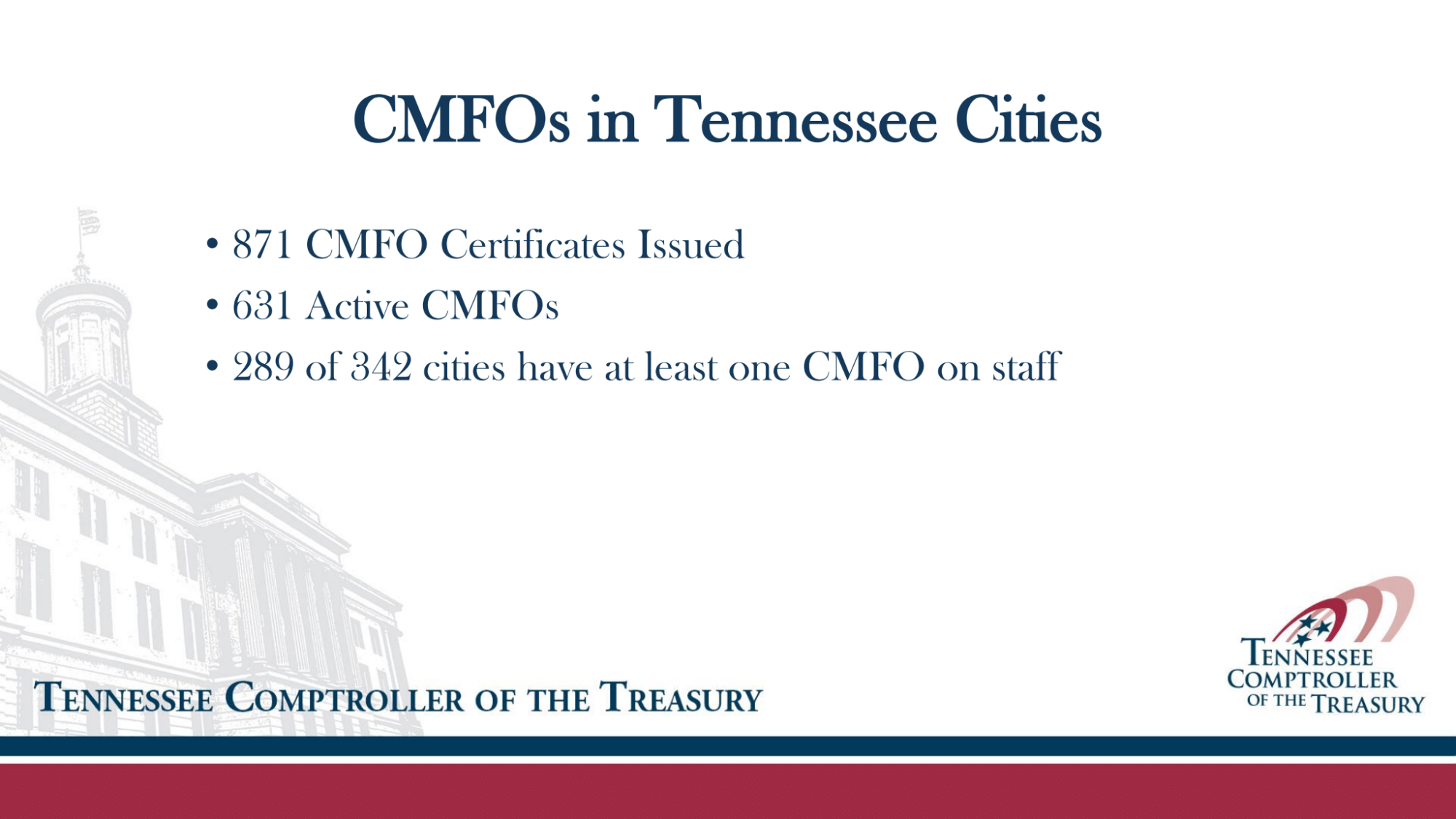 Counties across Tennessee already use uniform chart of accounts and have for several years. Mumpower said this system would make municipal financial information more accessible and easier to compare.

“Our office often receives requests for municipal financial data from you all wanting to compare yourselves to other cities,” he said. “We receive requests from the legislature, from TACIR, from the governor’s office, from researchers, and lately from the U.S. Census Bureau. Before, all we were able to do was point to our website where we have 342 pdf audits available, which are not easily searchable or easily comparable. That is part of the reason we are implementing this uniform chart of accounts tool.”

While the uniform chart of accounts will be implemented, Mumpower said efforts have been made to ensure costs are not passed on to municipalities. Cities can choose for their CPA auditors to input the data while doing their audit.

“We are not mandating that you as a city government keep a uniformed chart of accounts,” he said. “You will not need to change the chart of accounts you are currently using. You will not need to change your accounting software, and you will be able to keep your books, records, and funds exactly as they are now. Cities can choose to input this data into the crosswalk tool on your own or have your auditor do it for you, which may end up saving your city some extra expense.”

Mumpower said it would be “an understatement” to say the state of Tennessee is presently in good financial standing. 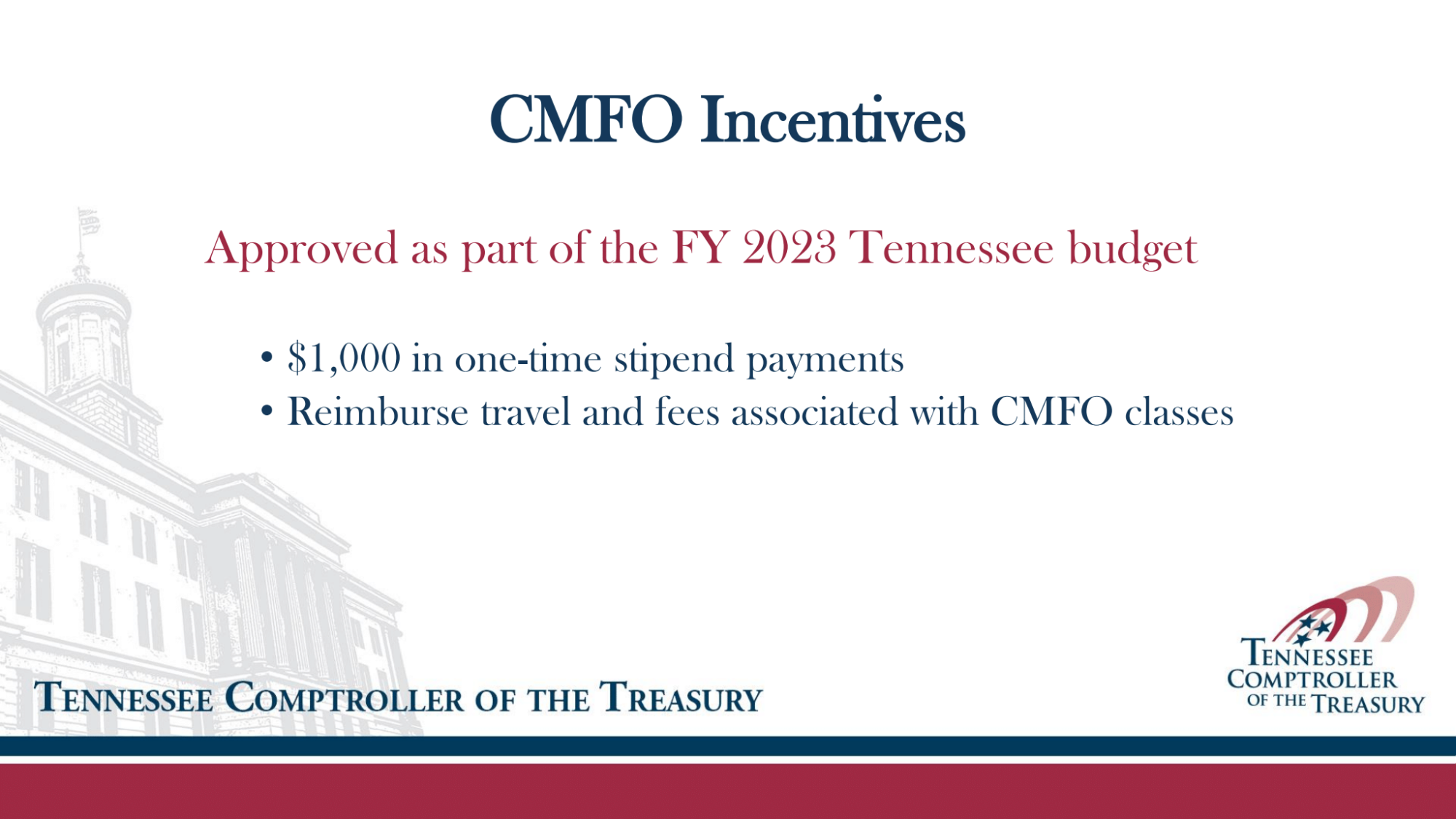 “We have a Tennessee tradition of keeping taxes low, of keeping debt low, of building and maintaining reserves, and operating with fiscal integrity,” he said. “These things together are what still have us ranked by U.S. News & World Report as the most fiscally stable state in the nation, and we continue to be one of the only states in the nation with a triple AAA bond-rating. Our state has weathered the pandemic and our revenue collections have remained very strong. Many of your revenue collections have remained very strong. In the last year, Tennessee has landed the largest economic development project in state history and has led the nation in GDP growth.”

While there may be challenges on the horizon, Mumpower said he is confident the state’s financial policies will meet those challenges head on.