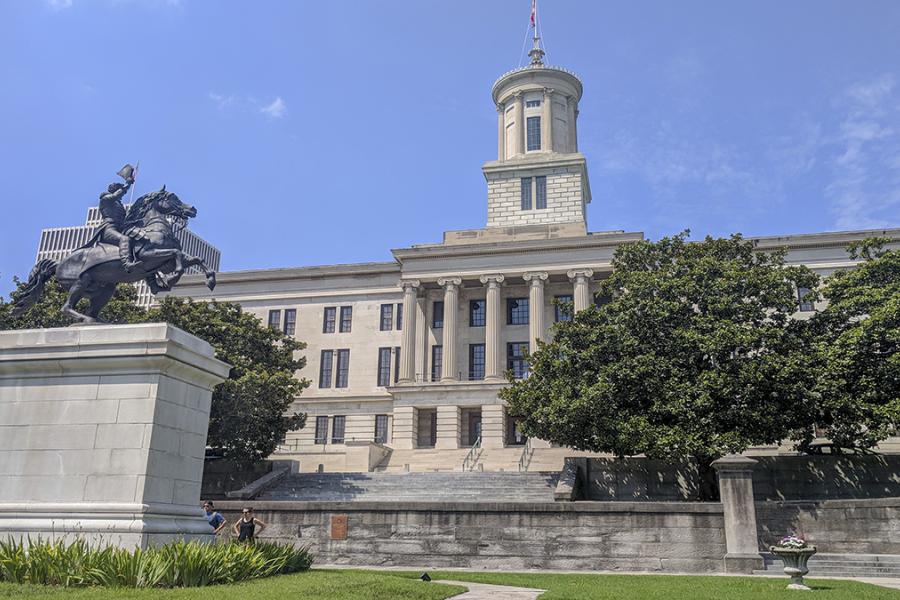 With the death of State Rep. Barbara Cooper, D-Memphis, prior to the election, the State House 86 race will also see a new face. The Shelby County Democratic Party will decide who will fill Cooper’s seat.

J. Adam Lowe (R-Cleveland) was elected to the TN Senate District 1, which encompasses parts of Bradley, Meigs, McMinn and Rhea Counties. A small businessman from Cleveland, he is an educator, author, and former Bradley County Commissioner. Lowe defeated Rep. Mark Hall in the Republican primary to fill the seat left vacant by Sen. Mike Bell (R), who opted not to run for re-election. Lowe, 41, hosts a talk radio program and is an educator who serves as an adjunct professor at Lynchburg, Virginia-based Liberty University, working remotely. Lowe served four years on the Bradley County Commission where he served as vice chairman, chairman of education, and on the committees for finance, law enforcement, and juvenile services. Lowe holds a bachelor’s degree in psychology and human development from Lee University; a master’s degree in public administration from the University of Tennessee, Chattanooga, and doctorate degree in education leadership and policy from University of Tennessee, Knoxville.

Charlane Oliver (D-Nashville) was elected to District 18, which encompasses parts of Davidson County. She won the seat previously held by Sen. Brenda Gilmore (D), who elected not to run again. Oliver, 39, is a Nashville resident and co-founder and co-executive director of The Equity Alliance,  a nonpartisan advocacy organization. She is a former congressional aide to U.S. Congressman Jim Cooper; director of communications with the Williamson County Chamber of Commerce; and marketing coordinator with Meharry Medical College. She holds a bachelor’s degree in human and organizational development from Vanderbilt University, Peabody College of Education and Human Development, and masters of public administration from the University of Tennessee, Knoxville.

Brent Taylor (R-Memphis) was elected to District 31, which encompasses parts of Shelby County. He won the seat previously held by Sen. Brain Kelsey (R), who opted not to run for re-election. Taylor served on the Memphis City Council for 12 years, the Shelby County Commission for three years, and was most recently chairman of the Shelby County Election Commission. Taylor and his wife own and operate the largest family-owned funeral operation in the mid-south.

Robert Stevens (R-Smyrna) was elected to as a new representative for TN House District 13, which is a new district covering parts of Rutherford County. Stevens, a 37-year-old attorney, served on the Rutherford County Commission from 2010 until retiring in August after his third four-year term. A resident of Smyrna, he holds a bachelor’s degree in political science from Lipscomb University in Nashville and law degree from University of Memphis.

Bryan Richey (R-Maryville) was elected to TN House District 20, which encompasses parts of Blount County. He defeated incumbent Rep. Bob Ramsey (R) in the primary election and ran unopposed in the general election. Richey is a U.S. Navy veteran and owns an independent insurance agency.

Kevin Raper (R-Cleveland) was elected to TN House District 24 to represent parts of Bradley County. He fills the seat vacated by Rep. Mark Hall (R) who ran for and loss the Senate District 1 seat. Raper is a Bradley County Commissioner and former teacher and principal. He holds a bachelor’s degree in mathematics from the University of Tennessee, Knoxville; a master’s of education from Tusculum College and an education specialist degree from Tennessee Tech University.

Monty Fritts (R-Kingston) was elected to TN House District 32 to represent Loudon and Roane Counties. He fills the seat vacated by Rep. Kent Calfee (R), who opted not to run for re-election. Originally from Rockwood, Fritts worked for 28 years as program manager and later director of operations for the Y-12 National Security Complex in Oak Ridge. He is a U.S. Army veteran who served in the Iraq war. He holds a bachelor’s degree in chemistry and a master’s in theological studies from Liberty University. He also holds a master’s of business administration from the University of Tennessee, Knoxville. He currently resides in Kingston, where he works as realtor.

William Slater (R-Gallatin) was elected to TN House District 35, which is a new district covering Summer and Trousdale counties. Slater is a dean of adult studies at Welch College, where he teaches Contemporary Issues in Education Law, Special Education Law and Faith and Ethics in Education. He is and his wife also own an educational materials publishing company. Slater is a past president of the Republican Party of Sumner County and the Hendersonville Chamber of Commerce. He holds a bachelor’s degree in eduction from Hyles-Anderson College, a master’s degree in educational leadership from the University of South Florida, and a law degree from Nashville School of Law.

Michael Hale (R-Smithville) is the new state representative of the TN House District 40, which encompasses Cannon, Dekalb, Jackson, Smith, and Wilson Counties. A resident of Smithville, he succeeds 14-year veteran state lawmaker Terri Lynn Weaver, who he defeated in the state GOP primary in August. Hale is a longtime owner and operator of DeKalb Funeral Chapel in Smithville, and also raises cattle and grows hay and tobacco on his family farm in DeKalb County.

Ed Butler  (R-Livingston) is the new state representative of the TN House District 41, which includes Morgan, Overton, and parts of Anderson, Roane and Fentress counties. He succeeds 30-year veteran state lawmaker John Mark Windle, who ran as an Independent and lost. Butler is small business owner and veteran of the U.S. Navy. A resident of Livingston, he served several years on the executive board of Adult and Teen Challenge of the Upper Cumberland.

Justin Jones (D-Nashville) was elected as the new representative of TN House District 52, which in encompasses part of Davidson County. He succeeds outgoing state Rep. Mike Stewart (D), who opted not to run for re-election. Jones is a community organizer and graduate student at Vanderbilt University Divinity School. Jones received his bachelor’s degree in political science from Fisk University. He has previously served on the Board of Directors of the Tennessee Healthcare Campaign.

Caleb Hemmer (D-Nashville) was elected as the new representative for TN House District 59, which encompasses parts of Davidson County. He succeeds outgoing state Rep. Jason Potts (D), who opted not to run for a third term. Hemmer, 41, formerly served as an aide to Tennessee Gov. Phil Bredesen and as an executive in the Tennessee Department of Economic and Community Development. More recently, he served for the past seven years as a commissioner on the Metro Board of Fair Commissioners and has led the redevelopment of the Nashville Fairgrounds, including a new expo center and the MLS Stadium where the Nashville Soccer Club plays. Hemmer currently serves as a Nashville healthcare executive. A resident of Forest Hills, he earned his bachelor’s degree in business administration from the University of Tennessee, Knoxville, and an M.B.A. in finances from Tennessee Tech.

Gino Bulso (R-Brentwood) was elected as the new representative for TN House District 61, which encompasses parts of Williamson County. He won the seat formally held by Rep. Brandon Ogles (R), who opted not to run again. Bulso is a trail attorney with 35 years of experience. He currently serves as chairman of the Supreme Court of Tennessee’s Advisory Commission on the Rules of Practice and Procedure. Bulso is a competitive tennis player and during 2017 was ranked by the USTA as the No. 1 player in the state of Tennessee for the men’s 55’s singles division. He received his bachelor’s degree in philosophy from Cornell College and his J.D. from Emory University School of Law. He and his family have lived in Brentwood for more than 25 years.

Jack McCalmon (R- Franklin) was elected as new represented for TN House District 63, which encompasses parts Williamson County. He won the seat vacated by Rep. Glen Casada (R), who opted not to run for another term amid an ongoing federal investigation. He holds a bachelor’s degree in business administration from Brandman University. McCalmon spent 10 years in the technology sector as an operations manager. In 2020, he opened a martial arts studio in Franklin, where he resides with his family

Ronnie Glynn (D-Clarksville) was elected to TN House District 67, which encompasses parts of Montgomery County. He will fill the seat vacated by Rep. Jason Hodge (D), who opted not to run again. Glynn is a veteran of the U.S. Army, having served for 23 years, and completing three combat deployments to Afghanistan and Iraq. His final stop brought him to Clarksville with the 101st Airborne Division at Ft. Campbell. He is a small business owner and holds a bachelor’s degree in business from Trident University.

Jody Barrett (R-Dickson) is the new representative for TN House District 69, which encompasses Hickman, Lewis and part of Dickson Counties. He fills the seat vacated by Rep. Michael Curcio (R) who opted not to run for re-election. Barrett is a Dickson attorney and co-owner of Dickson Title. He attended Lincoln Memorial University on an athletics scholarship and earned a bachelor’s degree in history. He earned his law degree from the University of Mississippi School of Law. His law firm currently serves as legal counsel for the Dickson Housing Authority, the Dickson County Emergency Communications Board, the Industrial Development Board of Dickson County, and are the delinquent tax attorney for Dickson County. In addition, he served as attorney for the Dickson County School Board from 2002 to 2006.

Kip Capley (R-Summertown) is the new representative for TN House District 71, which encompasses Wayne and parts of Hardin, Lawrence and Maury Counties. He won the seat left vacant by Rep. David Byrd (R), who opted not to run for reelection. Capley is a business consultant and political analyst. He a graduate of Middle Tennessee State University with a bachelor’s degree in history and political science, and is a founding member of the MTSU chapter of Turning Point USA, a nonprofit conservative advocacy group.

Jeff Burkhart (R-Clarksville) is the new representative of TN House District 75, which is a new district that covers the western part of Montgomery County. Burkhart is the Assistant Fire Chief of the Clarksville Fire Department. He also served 12 years on the Clarksville City Council. Burkhart graduated from Volunteer State Community College with an associate’s degree in fire science. He owns his family farm in Woodlawn, an unincorporated community in Montgomery County.

Brock Martin (R-Huntingdon) is the new representative of TN House District 79, which encompasses Gibson, Henderson and part of Carroll counties. He fills the seat left vacant by longtime Rep. Curtis Halford (R), who opted not to run for re-election. Martin, who has a doctorate in chiropractic medicine, and his wife, Dr. Krista Martin, have their own practice, Southern Chiropractic and Acupuncture in Huntingdon. Brock now serves as the clinical director and chiropractor at their practice. Additionally, he serves as treasurer of the Huntingdon Industrial Board, and the current president of the Tennessee Chiropractic Association. Brock is an active member of the Tennessee Republican Party and was the Carroll County Chairman for Congressman David Kustoff during his 2016 election