Mumpower, Lillard re-elected to another term 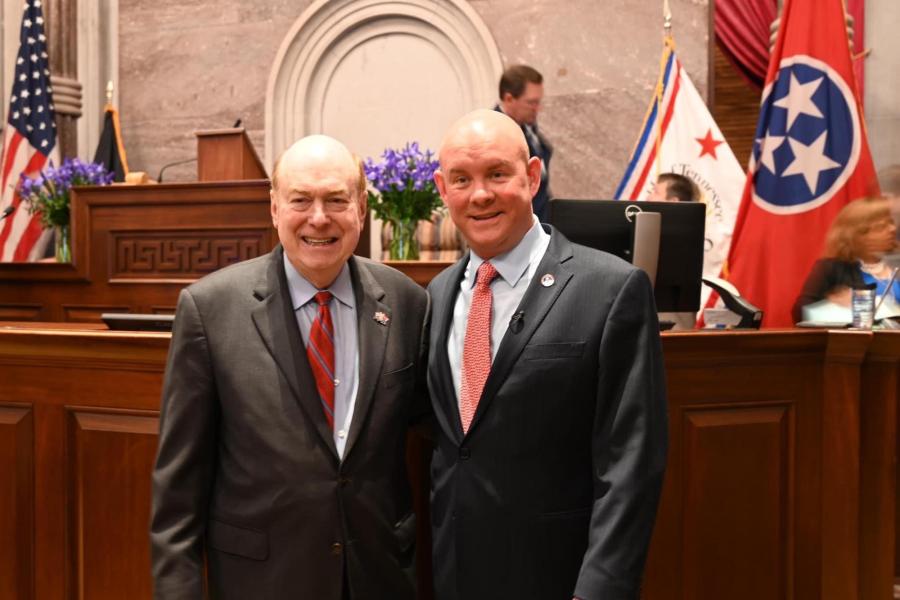 State Treasurer David Lillard, left, and Comptroller Jason Mumpower, right, after being re-elected to their offices in a joint session of the Tennessee General Assembly.

Members of the Tennessee Senate and House re-elected two of the state’s constitutional officers during a joint session of the 113th General Assembly on Jan. 11.

“I am honored to have the support and confidence of the Tennessee General Assembly in this important role,” said Comptroller Mumpower. “We will continue to encourage conservative fiscal management of taxpayer dollars and stay focused on our mission to make government work better.”

Mumpower is responsible for leading the Office of the Comptroller of the Treasury, which comprises 12 divisions and more than 560 employees, and ensuring the office fulfills its mission to make government work better. He joined the Comptroller’s Office in December 2010, serving as former Comptroller Justin P. Wilson’s deputy comptroller and chief of staff.

Prior to his service with the Comptroller’s Office, Mumpower served in the Tennessee General Assembly as the state representative for Sullivan and Johnson counties. He was first elected to office at age 23. During his 14-year tenure, he held the positions of House Majority Leader and House Minority Leader.

Lillard was re-elected to his seventh, two-year term as state treasurer.

"It is a great honor to be your Treasurer and have this opportunity to improve the per capita income, and the standard and quality of life for Tennesseans throughout our great State," said Treasurer Lillard.

As Treasurer, Lillard oversees tmore than 270 employees and the department internally manages more than $55 billion in state and local government funds.

Treasurer Lillard has championed issues of financial literacy and strives to find new ways to improve the financial lives of Tennesseans. Since first elected in 2009, he has worked with the Treasury Department to provide Tennesseans with financial tools needed to lead a better quality of life.

Both the comptroller and the treasurer serve two-year terms; whereas, the secretary of state serves four-year terms. All are elected to their positions by a joint convention of the House and Senate.