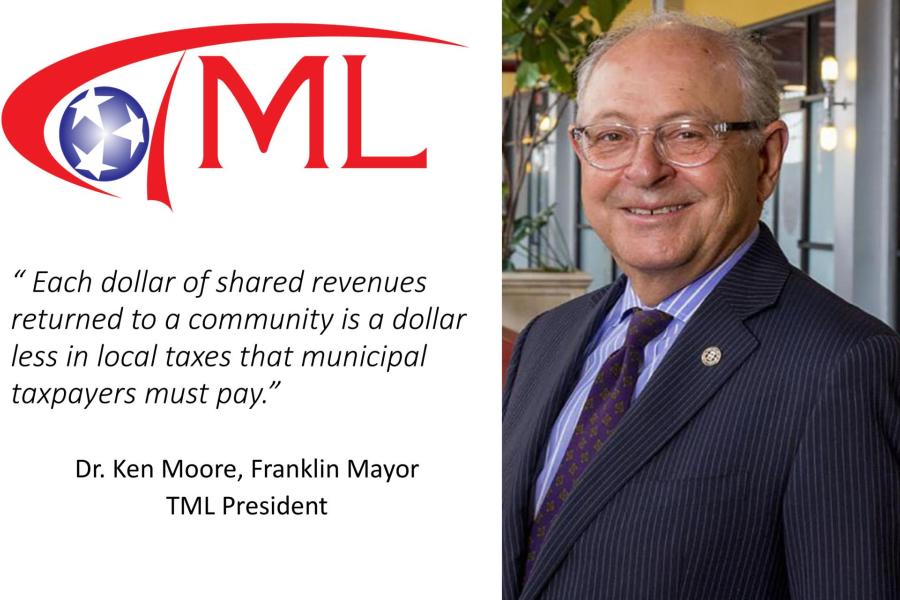 Tennessee’s cities and towns play a critical role in enhancing the state’s economy by acting as engines of economic growth, prosperity and competitiveness. Our state officials know this as 90% of sales tax revenue is generated by sales at local restaurants, grocery stores, retail and other businesses. And with no income tax, the sales tax is the No. 1 source of revenue the state of Tennessee uses to balance its budget and to fund essential programs and services.
Local, municipal taxes – primarily the property tax - pay for police, fire, street maintenance, water and sewer, schools, parks, libraries and other amenities - all the ingredients that attract and retain businesses and make Tennessee’s communities desirable places for people to raise a family, start a business, and visit.
But as state government enjoys continued billion-dollar surpluses, our towns and cities are worried how they will continue to keep up with the investments needed that make Tennessee’s fiscal health possible.
The rising costs associated with paving our roads, keeping our communities safe, maintaining our parks, and providing for weekly garbage pickup, continue to put pressures on our ability to provide basic city services.
Two pieces of legislation that have been introduced in both the House and Senate, if passed, will return millions of dollars in sales tax revenues to all cities and towns, easing the pressures on the local property tax.  Each dollar of shared revenues returned to a community is a dollar less in local taxes that municipal taxpayers must pay.
In 2002 to address a serious budget crisis, the state of Tennessee altered its 55-year revenue-sharing relationship with local municipalities by increasing the sales tax rate to 7% from 6%, but keeping all the new revenue collected for the state’s general fund.  Additionally, the state capped the local government portion on single item sales and retained the state’s 7% levy as well as the local option tax (2.75%) on purchases between $1,600 and $3,200.
In the 20 years since these austere measures were enacted, nearly $2 billion in additional sales tax collections have been realized by the state -- $2 billion that would have benefitted local taxpayers had the historical relationship not been altered in 2002.
Addressing a temporary state budget shortfall and propping up the state’s emergency stopgaps long after the need has passed has placed and continues to place an increased burden on cities to raise revenue through property taxes and force city residents to shoulder a greater share of the burden for the operation of their own local government.
City mayors, council members, and commissioners across the state are seeking the revenue-sharing relationship between state and local government to be applied to 100% of sales tax revenue that flows into the state’s general fund.
If the state returned to sharing all of the sales tax revenue, it would provide relief to local taxpayers, allow local governments to meet funding demands that are necessary to maintain vital infrastructure, provide essential services to our citizens, fuel economic expansion, and afford the quality of life that has allowed this state to prosper.
Now is the time for the General Assembly to restore the historic revenue sharing relationship with local governments by fully sharing state shared revenues, and by also returning the local share of the Single Article Tax back to local governments. There has never been a better time fiscally to return the share of funding to the communities that help make this state great.