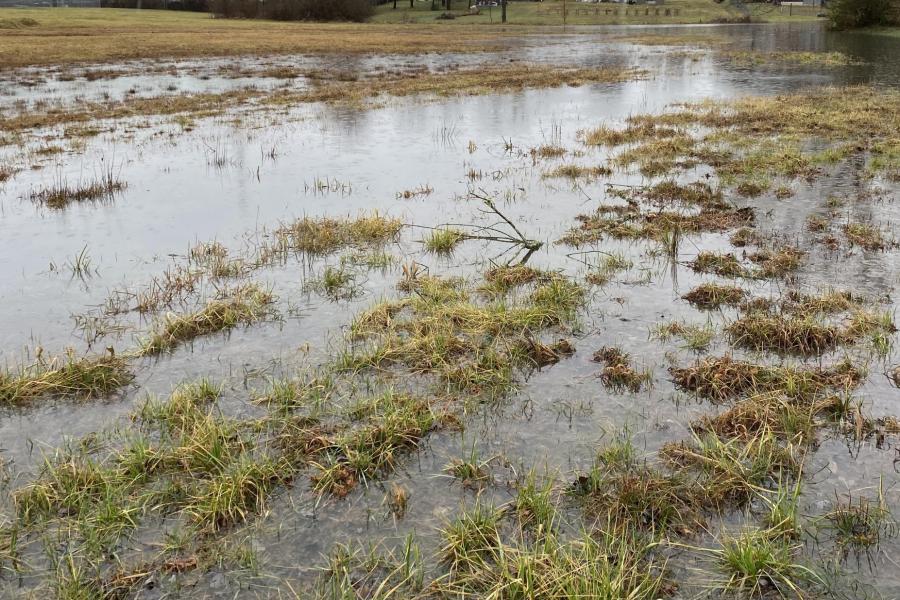 Frequent standing water and flooding have been an issue on a tract of land behind a local elementary school, often causing damage to local houses. Using green infrastructure and natural wetland plants, the city of McMinnville has partnered with UT students and local stakeholders to start a project that will provide flood mitigation, educational opportunities, and a new park for the community.

McMinnville and University of Tennessee officials are partnering on a new municipal park project that will provide flood mitigation, educational opportunities, and community collaboration.

The project seeks to address a five-acre tract of land behind a local elementary school that is known to flood, often endangering homes on bordering streets, according to McMinnville Stormwater and GIS Coordinator Lyndon Bussell.

“The area is subject to periodic flooding due to major rain events,” Bussell said. “It sometimes impacts the neighborhood there and houses may get flooded. The lot is virtually unbuildable due to standing water, which is almost constant through the summer months.”

McMinnville City Administrator Nolan Ming said the problem has been ongoing for several years and there have been many discussions on what can be done in the area.

“In the past, we had discussed different ways to address these issues,” Ming said. “That area is in a location where there is nowhere for that water to go. The ability to deal with the water and reduce the impact to the surrounding properties is very limited. We couldn’t really put in new pipes or other infrastructure to solve the problem. But one thing that is a best practice is to use plants and vegetation to mitigate flooding there.”

Bussell said discussions with Dennis Gregg, a research coordinator with the UT Institute of Agriculture, prompted the city to look into a more natural approach to the problem.

“We had talked with UT before about building a small wetland garden in the area because the soil and environment seemed to take to a wetland,” Bussell said. “They did a small project there to enhance the wetland a little bit. As time went on, we noticed the area improved and this could become an entire feature on the property. As we continued to have discussions with UT and people involved, the idea of restoration and rehabilitation of the wetland came about. The idea became more of a park and now we are involving the schools. It has become more of a park with a community garden. It has kind of snowballed from mitigating the stormwater issue to becoming an asset to the community.”

UT engineering students will work with the city to design both a park and wetland retention area that will mitigate flooding in the area. Initial plans for the park include the utilization of landscape design and green infrastructure to better manage runoff water. Bussell said the students will conduct a year-long project on the site.

“The students who are working on it are passionate about using green infrastructure to mitigate issues,” he said. “I think green infrastructure is more sustainable. It can be changed and altered accordingly. A lot of the traditional solutions are more costly, don’t have the same longevity, and are a lot harder to fix. I see this as a cost reduction for the city. It’s also just better for the environment to have more green infrastructure.”

Beyond mitigating area flooding issues, Ming said the project could help the city in other ways.

“We feel like any reduction in stormwater runoff will end up reducing our inflow and infiltration to our sewer system,” Ming said. “It all works together.”

Bussell said there are already frogs and crawfish living in the water area. By incorporating the wetland aspect, he said there is an expectation the amount of wildlife drawn to the area will increase.

“We just need to enhance their ecosystem more so we can see more of them. We fully expect by the end of this project to have a more diverse ecosystem out there with birds, butterflies and the like, just by incorporating native species out there.”

With McMinnville known as the nursery capital of the world, officials hope to source plants for the project from local nurseries.

“After we get the plans, we will at that time already have partnerships with all the local nurseries in the area and be ready to execute the plan,” Ming said. “The plan is to get all of the material from locally-owned and operated nurseries. All the labor will be done by local groups like Future Farmers of America, the gardening club, 4-H, and those kinds of groups. UT will oversee the installation. Once that is done, the partnership between the city and county schools will be in place. The city department of urban forestry will oversee that.”

Teachers at the school are hopeful the project will also provide more educational opportunities for students. Bussell said the school system already had a meeting where teachers discussed ways in which the park could provide functions as an outdoor classroom.

“The teachers are excited and had a lot of input about things they would like to see at the park,” Bussell said. “They wanted to see a lot of picnic tables where families could go, sit, and enjoy the scenery and spend time together. The elementary school also wants a community garden. We are incorporating that idea as well where kids and other members of the community can come learn how their food is grown, pick it, and take it home. I know the UT students are involving the students at Bobby Ray to come and learn about pH tests and things like that while they make their plans. The kids are already interacting with the wetland before it becomes a park.”

“Personally, I feel another park is another feather in our cap,” Ming said. “This will be another park in the center of town, which is sometimes and underserved area. It’s fantastic to have an interactive wetland in the middle of town.”

As local officials and residents learn more about the project, Ming said they are intrigued by the concept. The park project stands to benefit various stakeholders in the community.

“There are several layers to this that make it a success,” he said. “There is stormwater mitigation, which is the city trying to address stormwater issues. There is an education opportunity for the entire school district and the public in general who can come to this place and learn about a wetland. The students at UT are getting hands-on, real-life experience not only with designing something like this but interacting with the public.”