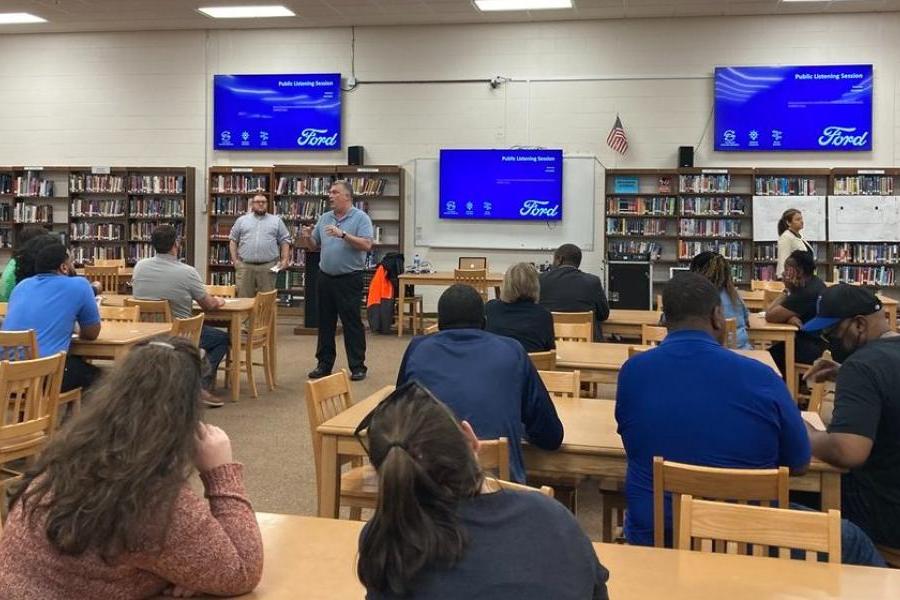 Ford officials have been holding meetings with students and parents at schools across West Tennessee to discuss potential job opportunities for students when the Blue Oval City facility opens in Stanton in 2025. Students entering eighth grade this fall will be among the first high school graduating class accepted to positions at the Ford and SK Innovations facilities.

Work is already well underway for the construction of the new Tennessee College of Applied Technology (TCAT) at the Blue Oval City site and the development of a workforce for both construction of the site as well as the Ford and SK Innovation plants.

One of the major focuses of workforce development is the new $40 million TCAT facility at the Blue Oval to be located off of the new exit 42 on Interstate 40 adjacent to the Blue Oval Site. TBR Chancellor Flora Tydings said the new facility will initially operate under the auspices of TCAT Jackson as a satellite campus with recently named executive vice president Heath McMillian leading the facility under the authority of TCAT Jackson President Jeff Sisk. However, Tydings plans are in place for the facility at Blue Oval to eventually evolve into its own, independent TCAT facility that will offer all programs presently available at other TCAT locations including healthcare and industry-specific trainings.

Tydings said other officials with TCAT have been meeting with Ford since December to make sure that TCAT curricula line up with the needs for the Ford workforce.

“The great news is that as of December we were 90% of the way there with what we already teach within our system,” Tydings said. “We are going to be writing and adding standards and tests to the curriculum we already have, but there is not a lot we needed to add in. We have had discusses with SK about the battery plant and some of those processes will be new to us in the electric battery portions of training. We have also been meeting with our partner in Kentucky who will be conducting battery training as well to make sure we are doing the same training for SK.”

Sisk said while Ford and SK Innovation’s needs will be the initial focus for the first few years of the new TCAT facility, there is plenty of room for offerings catering to other workforce needs in the region.

“This is a community regional asset that will be open enrollment for not only Ford and its suppliers but any businesses in the region,” Sisk said. “It is our vision that this campus is an educational hub and workforce pipeline. There are huge numbers of dual enrollment programs already in place. We want to enhance and build more room for technical colleges, colleges, and universities. This campus itself will have flex space and configurable space for those to offer classes, programs, and degrees.”

Tydings said TCAT is also presently working with Ford, SK, and a designer approved by the State Building Commission on the design of the new facility. Site work is expected to begin in late July with completion estimated to be in the first quarter of 2024.

As a result, work is being done to address skills gaps, Sisk said.

“Ford has identified over 130 what we call KSAs – knowledge, skills, and abilities – that Blue Oval employees will need to have, both on the battery site and the truck site,” Sisk said. “We are conducting a gap analysis and have done an academic mapping process to identify where places to address those gaps are located within our TCAT curricula. We are working to upgrade existing programs and creating new programs to bridge those gaps.”

Tydings said most of the skills gaps focus on electric battery vehicles and as a result TCATs will be adding worker ethic training, industrial maintenance with integrated automation, industrial maintenance technology, tool and die, electric vehicle production technician, collision repair, and welding skill sets. She said one of the reasons Ford chose Tennessee is because of the level of training received by students in these fields already. TCATs in Tennessee have an 87% placement rate and a 92% retention rate.

In addition to Ford, Tydings said the curriculum being developed will help develop workforces for the other automotive manufacturers across the state focusing on EVs, which includes Volkswagen, GM, Toyota, and Nissan.

Beyond the gap in needed skills, there is also a gap in needed people to fill in the workforce at Blue Oval. Jeff McCord, TDLWD commissioner, said Ford and SK are already working in local school systems to spark interest in students who will be graduating around the time the plants open by holding information meetings for students and parents.

“Eighth graders who are now starting will be the first people to work at Ford,” McCord said. “We have marketing efforts and recruitment efforts going on, but once again, you need to know who you are recruiting, what is the product, and the skill set needed. In the interim, a lot of things like career fairs and conversations with school superintendents that Ford is doing are putting that recognition out there.”

Dual enrollment programs in high schools across West Tennessee will be working to ensure that students graduate high school with the qualifications they need to serve in the automotive industry. Tyding said there has been an increase in dual enrollment among high school students, particularly following a recent $200 million investment by Gov. Bill Lee and the General Assembly in those programs.

“This is a not only a tremendous economic opportunity for your whole community, but it can also bring people into the economy and provide a better way of life all across the region,” McCord said. “I think of it as a prosperity engine. There is a lot of ways to bring people along who might not have that opportunity or aren’t connected to it. Besides that, we are going to need them.”

Perhaps a more immediate need for workers is in the construction surrounding the Ford plant, which is being overseen by Walbridge. Alisa DuBois with new business development at Walbridge said the organization is already planning at least four job fairs this year focused on meeting construction needs with the first scheduled for June 18, 2022, at the Renasant Center in Memphis.

“At the peak of this project, there are going to be 6,000 people working on site, and we want to help facilitate people with entry level skill sets into the construction industry for long-term employment,” DuBois said. “We are hoping to help connect with the local community, help connect them with some of our subcontractors and our company as well as some of the construction programs Walbridge is running. We want to build a database of local workers so contractors can see those who are interested in working on this project.”

Mark McClelland, vice president with Walbridge, said recruitment for construction will ramp up in the summer with hiring events through December. While the company is already mobilizing on the site and beginning construction work, subcontractors will increase their hiring in August.

McClelland said those who work for construction subcontractors and prove to be dedicated and ethical workers will potentially get positive recommendations from those subcontractors that Ford will use when conducting their own hiring for the plant.