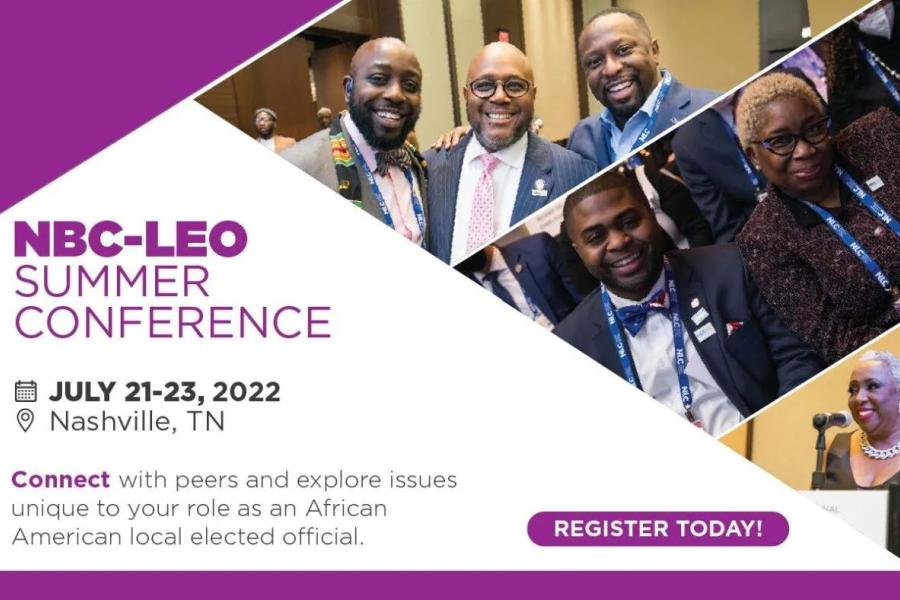 This year the city of Nashville will host the Summer Summit of the National League of City’s National Black Caucus of Local Elected Officials (NBC-LEO) for the first time.

BC-LEO membership will converge on the city from July 21-23 with the conference being hosted at the Grand Hyatt in Nashville Yards. NBC-LEO represents the interests of African American municipal officials and provides a forum to share ideas, best practices and develop leadership experiences.

Nashville Councilwoman and President of NBC-LEO Sharon Hurt is eager to show off all the city has to offer.

“Nashville, in my opinion, is postured beautifully to show inclusion, to show people how different people, nationalities, and ethnicities come together and work together,” Hurt said. “We have industries that effect all races: the healthcare industry, music, and education. When Dr. Martin Luther King Jr. came to Nashville he said he came not to bring inspiration but to gain inspiration. With people making comments like that about the city of Nashville, I am proud for people to see Nashville, especially people of color. They think Nashville is all about country music, but that is just one gift Nashville has. I want to brag about it, boast about, and stand proud as a peacock and say this is my city.”

Hurt has long been involved in the Nashville community, spending 17 years with Meharry Medical College and 18 years with the Jefferson Street United Merchants Partnership (JUMP). She initially ran for her at-large seat on the Metro Nashville City Council in 2015.

“I had worked in the community for almost 20 years as a public servant,” she said. “I consider myself a public servant. I saw the need to be engaged in the political process in order to get things done and make things happen. It was a natural foray for me to move from being in the public servant role into getting into a position where I could help create legislation that would make things easier for those who are disenfranchised, marginalized, or just unaware of the resources in the city.”

When she joined the city council, Hurt said it was a natural step to join the council’s minority caucus. She eventually served as both vice chair and chairwoman of the caucus.

“It was just through being a freshman councilmember I became a part of the caucus because it focused on issues for minorities, which has been a passion of mine,” Hurt said. “Once I got on the council, I wanted to help create legislation that would make a difference. We know that there are disparities for minorities. We know that there is systemic racism and discrimination when it comes to black and brown communities. I wanted to do something to bring about that change. I felt it was my responsibility to be a part of the caucus to address those needs.”

The same year Hurt joined the Metro Council, NLC held its annual City Summit in Nashville. Hurt said attending the city summit showed her the importance of both being involved in NLC and NBC-LEO.

“My first introduction to the political world beyond Nashville came during that summit,” she said. “Being a new councilmember, I was introduced to NBC-LEO. Karen Johnson, who is now our register of deeds, was a seasoned councilmember at the time and had been involved in NLC and NBC-LEO. She told me I needed to be a part of it. I went into that meeting where Erica Gilmore, who was a councilmember at that time, was running for office. I got the opportunity to participate in the election process of one of our very own for a board position. It was educational, informative, and exciting.”

The following year after becoming a member of NBC-LEO, there was an opening for an assistant secretary position, so Hurt volunteered for the spot. A year later, she was elected to serve as secretary for two years before most recently being elected the organization’s president.
Hurt said she has received numerous benefits as both a member and as president of NBC-LEO.

“It has allowed me to specifically focus on policy, the process, and how what’s happening on a federal level impacts us on a state and local level,” Hurt said. “It has given me opportunities to build relationships with people across the country who are also experiencing the same type of challenges or barriers we do. Many of them have offered solutions we have been able to take on and adopt ourselves. It’s almost like getting a fast track on the process, especially on things like the CARES Act and the ARP Act.”

The ability to connect with others across the country and work together on new ideas are among the key reasons Hurt encourages local leaders to join NLC and NBC-LEO.

“I wholeheartedly would encourage everyone to join,” she said. “Things are going too fast nowadays. Everything has to be instantaneous. It amazes me how much these young people know and what they learn. I believe this membership has offered me the opportunity to have the on-the-job training, and the plan of how it should be, and then see the reality of how things are in comparison to what it is on a national level. You get benchmarks, best practices, and learn about the scope of things, how to chart out a timeline to accomplish what needs to be done, and the advocacy that can be done.”

For those coming into Nashville this summer, Hurt has a must-do list to get the real feel of the city.

“Of course, we definitely need to talk about the HBCUs, because many of them have children and grandchildren, and we want them to send them to school here,” Hurt said. “We would love to have people visiting our city and get to experience the universities we have. They don’t know about the Hiram Van Gordon Gallery at Tennessee State University. They know as Music City, but they don’t realize we are home to the Grammy Award-winning Fisk Jubilee Singers or the world-renown TSU Aristocrat of Bands. We have the National Museum of African-American Music, and music is a universal language. People can relate and resonate with a lot of the music and musicians who are featured in the museum. They need to see Fort Negley and see the impact these soldiers and troops had in our Civil War. Jefferson Street has a wonderful history and all the entertainers who made it how it historically is. And of course, they have to try the Nashville hot chicken from Mr. Prince.”

Most of all, Hurt said she hopes visitors feel the positive energy the city puts out.

To register for the NBC-LEO conference this summer, click here.