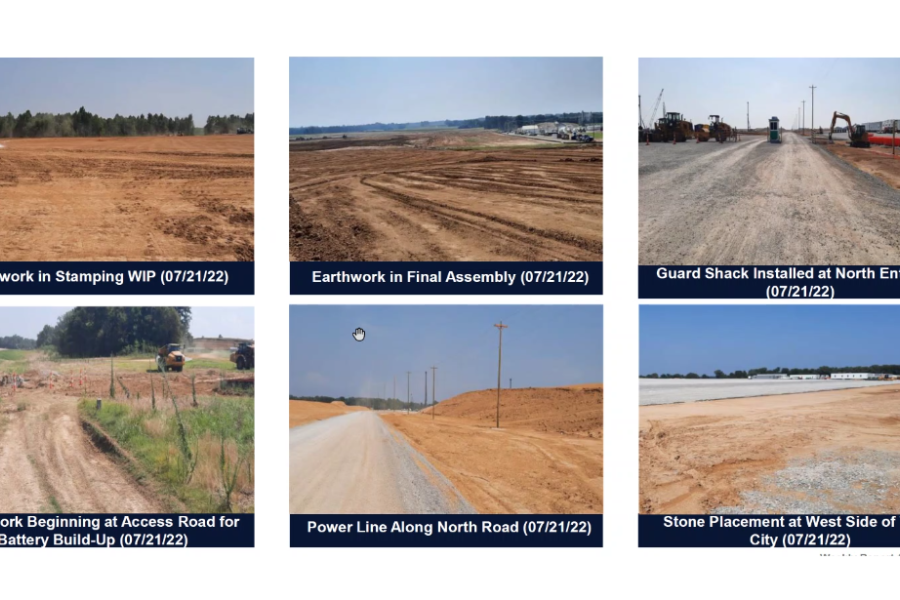 Images of progress at the Blue Oval City site recently taken by officials with construction and design consultants Walbridge.

With work already underway at the future site of Ford and SK Innovation’s Blue Oval City plant, design and construction consultants Walbridge anticipate the peak of construction on the massive project will be reached next summer.

Officials with Walbridge addressed participants in a recent Blue Oval City informational meeting held by the Tennessee Department of Economic and Community Development (TNECD) to discuss ongoing and future work at the site, Walbridge’s community involvement, and how construction jobs at the site could lead to future employment with Ford.

Founded in Detroit in 1906 where the company is still headquartered, Walbridge is the top firm for automotive construction in the U.S. and has conducted $9.2 billion worth of business in the southeast alone, including projects in Chattanooga, Decherd, Jackson, Lebanon, Nashville, Spring Hill, and the Arnold Air Force Base near Tullahoma.

Chris Johnson, Walbridge project executive, said roughly 4,000 acres are under construction at the Blue Oval site. Development at the site includes construction of an aluminum stamping facility, metal fabrication and assembly, a body shop, painting, general assembly, final inspection, and delivery areas that will be housed in a 4-million-square-foot facility. The entire Ford-SK project will have roughly 10-million-square feet.

“It’s a very complicated project,” Johnson said. “It’s the largest Ford project that I’ve been involved with and, I believe the largest in the history of any location with the company. “

Mark McClelland, Walbridge group vice president for mobility, said construction will peak in the middle of the summer of 2023 with around 5,500 craft workers just for Walbridge’s part of construction on the site at that time. This could become upwards of 10,000 to 11,000 people when construction work begins to overlap with the installation of process equipment and training of employees for the actual vehicle manufacturing.

“To go out there and see it is really believing,” he said. “The battery plant is 3 to 3.5 million square feet. That is roughly 60 football fields that will fit within that facility alone. We build the facility, the foundations, and the initial utilities to the site. There will be other contractors who actually process equipment that will be coming in after us. Right now, we are in site work and we have started deep foundations, pylons, and caissons. The foundations that the structural steel sits on are going in place. You will start to see the steel going up in the next two months, so to drive by the site sometime in September you will see the steel skeletons of the building going up.”

The name “Blue Oval City” accurately reflects the atmosphere on the site already.

“We are building a city, a city that doesn’t exist,” McClelland said. “We have to get trucks, equipment, and people in and out of this site. We have temporary power being run to three concrete batch plants on that site currently running on generators. We want to get that on power, which will also power our trailers. It’s not just a construction site; we are building a city for all these workers, all our folks, and all our subcontractors. We are really happy with the cooperation, the local, the regional, and state authorities who have helped us and Ford get this rolling.”

McClelland said bringing in workers, particularly those involved in trades, is an important task to meet construction deadlines.

“A large project needs a lot of workers, contractors, subcontractors, vendors, and suppliers,” he said. “There are a lot of different ways to get them involved and we are actively trying to engage them. It’s a huge project with a huge demand for craft labor.”

As a result, Christopher Morgan, Walbridge vice president and general manager, said Walbridge and its workers will be deeply entrenched in the communities near the site. The company has already donated AED equipment to the Haywood County Sheriff’s Department and worked with a local women’s shelter in the area.

“We want to be good stewards of the community,” Morgan said. “We have mapped out a 30-month community engagement process. It is very important for us to be entrenched in the community. We have 140 people from Walbridge on the site who are engaged with the local community. They could be renting homes, buying homes, and renting apartments. We want to be a good neighbor when we come to the area.”

The company has also conducted several local outreach meetings to draw interested contractors, subcontractors, and prospective employees. Initial meetings have already been held in Memphis and Jackson. Of the two meetings already held, 80% of the attendees were local.

“As a result of those subcontractor outreach meetings, we decided to hold a matchmaker where we are taking local contractors and service providers and marrying them up or introducing them to some of the prime contractors we are utilizing,” McClelland said.

There are plans for additional meetings at TCATs in Memphis, Jackson, Covington, Ripley, and Newbern, each to be held in August. The events in Covington and Ripley events will be open to the public. Future meetings are also being planned for October.

“We are going to speak with their students about the different needs that we have and how they can get engaged,” McClelland said. “We want to have as much local participation from the workforce as we can. It is very good for the community and it is very good for our industry as a whole.”

“We are pulling every lever that we can to get the message out to attract potential employees,” he said. “One of the things we are working on is to recommend these employees to Ford long-term. As this evolves from a construction site into a manufacturing site, these employees can transition into work at the Ford Motor Company based on a recommendation from us. We need to continuously come up with new and creative ways to get the message out to attract craft labor.”

For those wanting to take part in the workforce, McClelland said one of the best things to do is attend a local meeting held by Walbridge and look at the Walbridge websites. Filing out a registration form for a meeting – even if a person is unable to attend that meeting – will put them in the company’s system.

“Step one is identify what they are looking for: whether they want to work craft labor or are looking for a project,” he said. “We are collecting that information, sharing it with our contractors and our union friends and trying to fit those folks with what they are interested in. Coming to one of our workforce development sessions is also important. We want entry-level construction folks, selfishly. Our industry has a shortage, not just for this job but across the nation. We want to get people into the construction industry and hopefully have them stay in the construction industry because we need it.”

McClelland said Walbridge and its employees are enjoying being a part of West Tennessee, even if only for a brief time.