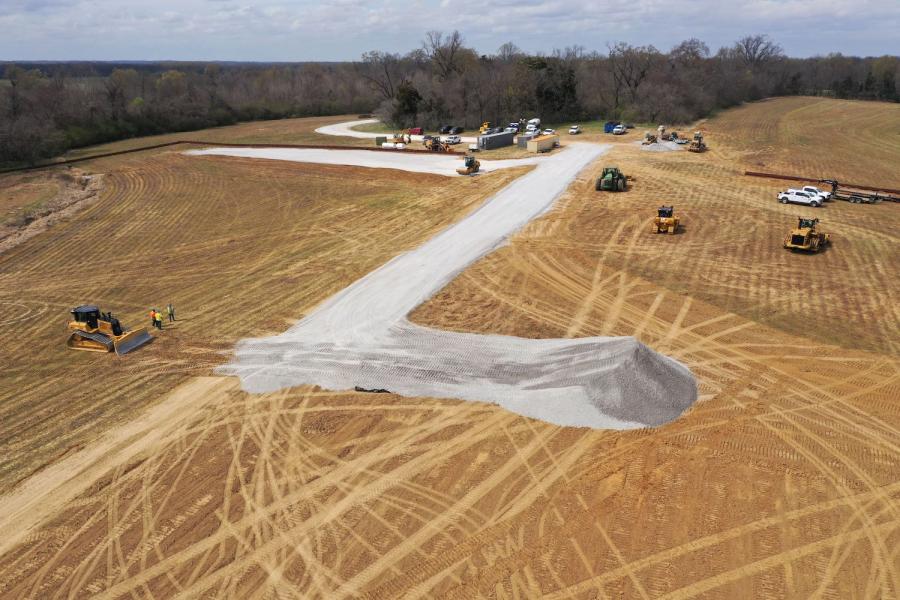 Benchmarks are being met and set as state agencies work to deliver utilities and infrastructure necessary for Ford’s Blue Oval City assembly lines to be operational in early 2025.

Tennessee General Services Commissioner Christy Branscom, Memphis Regional Megasite Authority CEO Clay Bright, and Tennessee Department of Economic and Community Development (TNECD) Commissioner Stuart McWhorter updated West Tennessee municipal and other officials on what progress is being made in and around the site in terms of water, wastewater, electric, road construction, and workforce development.

Bright said one of the purposes of the Megasite Authority is to serve as a connector between the various state agencies who all have a role to play in the project and promised deliverables to Ford. This includes coordinator the water and wastewater efforts being undertaken by General Services, road improvements conducted by TDOT, environment and zoning permits required through TDOT for construction, the safety approvals required by TDCI, and the workforce and labor development as well as recruitment being done by TNECD.

“The state is responsible for certain deliverables to Ford,” Bright said. “That includes the new interchange at mile-marker 39, improvements to an existing interchange at mile-marker 42, and the water and wastewater treatment plants. One thing we are working on is a utility plan with all the different utilities that will be involved in the megasite, that includes gas, electric, and some communications groups. We are also working on the new TCAT we are building, which we are looking to have completed at the end of 2023 or early 2024. We have also been working the past six months with all the leases, capital agreements, and to get those executed.”

One of the major goals the authority has for the end of the year is to set up the structure of the payment-in-lieu-of-taxes (PILOT) agreement with Ford and how that agreement will work with local authorities. At present, Bright set the megasite authority is set up to last for 30 years to oversee the treatment plants and other infrastructure. At that point, all of the property and infrastructure will be handed over to Ford and will then become county property rather than state property.

Branscom said work is well underway on the infrastructure her department is overseeing.

“Our department has been involved with the Memphis Regional Megasite for years, spending most of our time to determine the best way to provide water and wastewater services at the site and not to mention all of the coordination needed with all of the providers out there,” she said. “Thankfully, we are thrilled to be at this point where we are working on the megasite for a tenant. We have been studying and prepping for this for years.”

The two large capital projects General Services is overseeing involve water and wastewater at the site. The water side of the project includes a 36.5-mile water main pipeline from the megasite to the Mississippi River as well as an associated pumping station in Covington, a 7-million-gallon-per-day water treatment plant, a new water tower on the southwest side of the property with side piping, and seven water wells on the property. For wastewater, construction is on-target for a 5.1-million-gallon-per-day-capacity treatment plant

“We are about 30% complete with the [water] pipeline, and when I say complete, I mean it is in the ground, buried, tested, and ready to go,” Branscom said. “We have about 45% of the pipeline on the ground where it is going to go. We are completing the foundations on the pumping station in Covington. The wastewater treatment plant is expected to be completed in September 2023, so about a year from now. The best news is we are on time and on budget.”

Construction is fully bid out on these projects with Nashville-based Garney Construction handling the pipeline and pumping station in Covington while Birmingham, Ala.-based Brasfield & Gorrie is serving as the construction manager for the treatment plants.

Both of the major treatment plants will be finished in 2023, but Branscom said other water and wastewater infrastructure are slated for completion in 2025. Once that construction is completed, work will be done on the property located east of State Route 222 to meet the needs of potential tenants on that segment of the property.”

Bright said that TDOT was on target to open the new Interstate-40 interchange and needed expansions on State Route 222, but there have been changes from Ford on what their specific needs are for the existing interchange at mile marker 42 as well as the design needed for S.R. 222. Bright said the target opening date for the roads coincides with Ford’s plan to have vehicles rolling off the assembly line in early 2025.

“Our primary goal is to be the front-facing organization for the state with respect to creating jobs as well as the work we do with small businesses and entrepreneurs,” he said. “We have several strategies that we work. Obviously, the work we do in and around our rural communities is crucial. We want to take those distressed counties and take them out of being distressed communities. Blue Oval City is a major topic wherever you go in the state of Tennessee.”

Many communities are looking to land suppliers for Blue Oval, but McWhorter said the expansion of EV manufacturing by the three other major auto makers in the state could also bring potential economic investment. The state already has 930 automotive establishments that could also expand their operations as a result EV manufacturing.

“I would say the majority of the pipeline we have is in the automotive industry, but isn’t necessarily specific to Blue Oval City,” McWhorter said. “Nissan, GM, and Volkswagen all call Tennessee home. Because of the investments they all are making, it has created a lot of interest in the state. Adding Blue Oval City to the mix enhances that pipeline. Across the board, in terms of specific automotive industry, it depends on which OEM they work with. Many suppliers work with all of the companies while others only work specifically with one OEM. The fact that Tennessee was in this game many, many years ago we have become a pretty sought-after state from suppliers.”

McWhorter said a lot of conversations are already taking place with suppliers.

“We have some headwinds economically, but all these suppliers and interested companies are looking long term,” he said. “They making a long bet on Tennessee, and because of that I would say the interest is robust. We are going to continue to have announcements. At the end of the day, the announcements are great, but at the end of the day we need to be mindful we aren’t in the business of just making announcements and just adding projects to the point where it is putting stress on infrastructure and our ability to deliver.”

Another concern that has been expressed is worries from existing industries that Blue Oval City and related projects will draw away the workforce they already rely on. McWhorter said ECD is sensitive to the fact there is already a growing need for workers in the region.

“We want to provide some support and resources for those companies to help recruit and train,” he said. “There are opportunities to do that, and we want to have opportunities to do more of that where we can. It’s one of the things we offer companies when we recruit them. Workforce is a wider topic, and it requires the coordination and work of many departments and agencies across the state, the private sector, and other non-profits working to address workforce, whether through retention or training.”

One tool for workforce development is the new Tennessee College of Applied Technology (TCAT) on the site. Bright said the TCAT on the site is expected to open either in time for the fall semester of 2023 or the spring semester of 2024.

“They have been working hard with officials at Ford and SK on what their curriculums need to be,” Bright said. “They want to get the TCAT opened a year ahead of time for Ford so they can start getting that pipeline of workforce developed.”

The Megasite Authority is also working with the Department of Human Services to bring people not currently in the workforce either into or back into it. Bright said the megasite authority has been working in local schools, with the Tennessee Board of Regents, TCAT officials, and the education arm of Ford to start developing workers now.

“We are not going to turn on a switch in 2025 and suddenly have a line of all these people to work in the factory,” Bright said. “We are ramping up across West Tennessee and neighboring states like Kentucky, Missouri, Arkansas, Mississippi, and Alabama about their workforce and how we can use them. We are ramping it up not just to serve what is going on at the megasite but also for a lot of different industries out there and what curriculums for that can be. We have connected with higher education to see what their curriculum needs might be to funnel people to both the megasite and other industries in West Tennessee. We want to raise the bar for that whole area.”

To keep up-to-date with information from the Megasite Authority about meetings, project updates, and more, visit https://www.tn.gov/megasite.