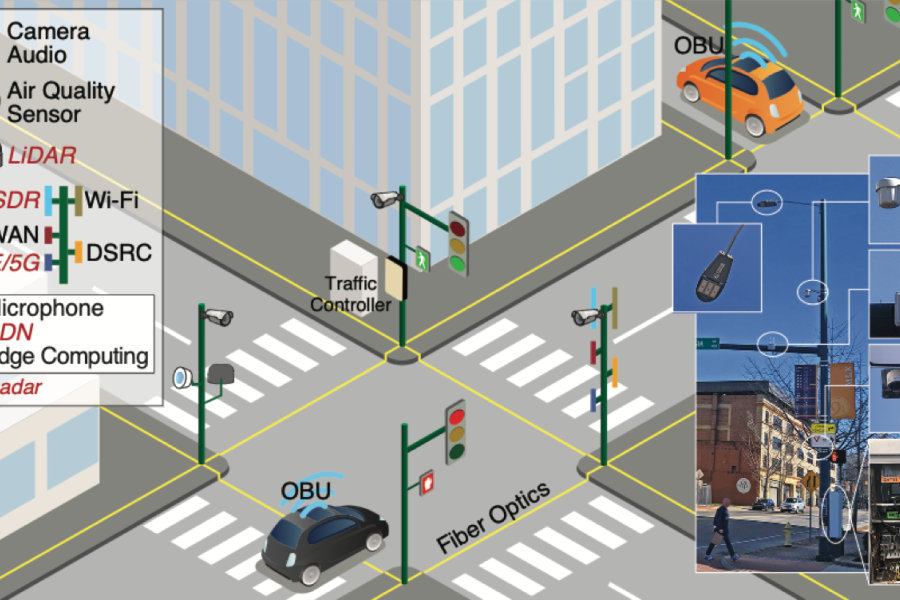 The CUIP tested bed on Martin Luther King Jr. Boulevard in Chattanooga is providing important data that is not only helping the city of Chattanooga make streets safer but could also have implications for cities across the world.

As emerging vehicle technology and smart infrastructure become more advanced, the city of Chattanooga is working with several partners on a series of testbeds that will pilot new ways municipalities can use smart and electric vehicles for data-driven government.

Dr. Mina Sartipi, director for the Center for Urban Informatics and Progress (CUIP) and computer science and engineering professor with the University of Tennessee Chattanooga (UTC), spoke at the TML Annual Conference in Gatlinburg about how the city of Chattanooga, CUIP, the UTC Smart Communications and Analysis Lab (SCAL), and other partners are working to pioneer ways smart technology on city streets can be applied on a variety of projects, ranging from reducing pedestrian deaths to monitoring local air quality to improving emergency vehicle response times.

Described as “real-world sandboxes for research and development,” Sartipi said testbeds can apply research and academic work into the real world, allowing the theoretical to become reality.

Chattanooga presently has two testbeds up and running: the 1.25-mile Martin Luther King Boulevard corridor and the 2.5-mile route parallel to MLK Boulevard, and a second on U.S. Route 27 and connected interstate ramps that was financed through a $1.37 million grant from the National Science Foundation. Recently, the city also announced a new, $9.2 million testbed aimed at electric vehicles, funded through a $4.5 million U.S. Department of Transportation Grant and a $4.7 million match from UTC, industry partners, the city of Chattanooga, and EPB.

“One of the visions we have is that Chattanooga becomes the city-scale testbed for the future of mobility in terms of modes of connectivity, automation, and EVs,” she said. “A lot of vehicles that are coming out have sensors, adaptative cruise control, lane adjustment, and there are automated vehicles on the road now. However, this technology counts on only what is built into the car. What we are doing is beyond that. We are not touching anything on the car, but letting the cars talk to each other. For instance, if my car hits black ice on the road it can let other cars around me know there is an obstacle on the road.”

The project began in 2019 focused on a more urban environment on city-owned poles. The project has expanded to include roads managed by the Tennessee Department of Transportation (TDOT). Censors are put on poles to ping back information to researchers about what is happening on street level.

“We wanted to understand how people are using the streets and the safety of the streets,” Sartipi said. “A lot of the work we have worked on so far deals with pedestrians and cyclists, but expanding the testbed to the highway will allow us to do more work related to automation and connectivity at faster speeds. There are some other pilot studies going on in terms of public health and transit as well.”

Sartipi said the first six months of the program was spent alleviating privacy concerns from the community and educating them on what the testbeds could help accomplish.

“The poles on Martin Luther King Boulevard are equipped with different devices and censors that have different computing capabilities and wireless communication capabilities,” she said. “We have cameras, LiDAR, some with radar, air quality, and microphones on the poles. One of the questions we get is ‘are we watching people and are we listening to people,’ and the answer is no. We don’t store any of the data; it is all dropped. We don’t need to know that Mina crossed the street, just that a person crossed the street.”

Each object gets a generic label like “person” or “car” along with a time stamp that is stored, allowing researchers to see things like what peak times are for pedestrians or how many cars park in a certain area during the course of a day. The time stamp allows researchers to track a single object as it moves through various intersections, allowing them to see travel times between certain intersections.

The 11 censors in place collect about 1 billion points of data daily with different metrics, such as how many vehicles are crossing specific intersections and the makeup of those vehicles, such as cars, trucks, bicycles, buses, and others. Other testing involves seeing the limitations of the technology, such as does the technology understand how trees change their appearances with the seasons or if data can be taken from a smaller vehicle if it is blocked behind a higher-profile vehicle.

The data allows researchers to create a digital twin of real traffic to see things like how changing signal timings could impact traffic or alter the amount of time pedestrians have to wait to cross the road. The more precise the data collected in the real world, the more accurate the research. Another way researchers can use the testbed is by getting out themselves, either driving vehicles around the testbed area or walking around as pedestrians to model different situations.

By predicting trajectories of vehicles, people, and other items on the road, researchers can also see where accidents are most likely to occur. Technology can detect illegal U-turns, when vehicles are traveling in the wrong direction, and other dangerous wrong-way traffic flows. There are numerous public safety applications for the program.

“We are collecting data and visualizing where people are crossing the road at undesignated areas or how close buses are to the bike lanes, and how often our bike lanes are being used,” Sartipi said. “If an accident has happened, there are records of it like 911 calls, which we have access to. One of the metrics is to reduce traffic fatalities to vision zero, and in order to do that we have to see what intersections have higher risks of accidents. There are areas where there may not be an accident, but a vehicle gets too close to a pedestrian or cyclist. Those near-miss incidents are the ones we want to understand.”

By identifying these potential problems, partners can work toward improving safety both in the testbed and in other areas of the city. In addition to the testbed, Sartipi said the program also plugs in other publicly available data such as from 911 centers, TDOT E-TRIMS, weather data, and ArcGIS. By using this data, the team was able to see where accidents happen in the city, what time accidents are most likely to happen, and contributing factors to those accidents, even though the accidents were not occurring in places within the testbed itself.

“There is a section in North Chattanooga that had averaged 80 accidents,” Sartipi said. “The speed limit was 35 miles per hour. Our team saw that this is an area that needs attention, but we aren’t traffic engineers. We talked with the city to find out what was going on with this intersection. We figured out there was a pole too close to the intersection. This is an area of the city where everything is very tight. We were able to move the pole and add signs. There have been no accidents since.”

Another safety initiative involved working with a local nonprofit to determine how accessible sidewalks and crosswalks are for those in wheelchairs.

“This technology is enabling us to identify a person in a wheelchair on the crosswalk,” she said. “We know how long it is going to take them to cross the street because we can measure their speed. We also have data from the signal phasing from the traffic controller, so we know how long the pedestrian has to cross. In real time, we could adjust that crossing by a second or two to help that person cross the street safely.”

By seeing when vehicles arrive at intersections and when they are stopped, the technology can also help researchers figure out ways to streamline traffic.

“We have all been sitting at a red light wondering why we are sitting there when there are no cars coming in the opposite direction,” Sartipi said. “We applied an artificial-intelligence based algorithm and it allowed more vehicles to come through the lights when they are green. We are looking at each intersection independently and what is going to happen at this intersection in the next cycle. We are not looking at what is going on now. The traffic comes from upstream or downstream. We can, with a high accuracy, know what the traffic is going to be at the next cycle and plan the next phase based on that. After we applied that, we reduced time travel by 20% and energy savings from that was about 15%.”

Of course, Sartipi said by altering things like crosswalk timings, researchers also have to take into account the consequences that will have for other traffic.

“We all know that adding one or two seconds to one intersection can completely mess up the next,” she said. “Our goal is how do we do this in a more global way – not necessarily the whole city but maybe the intersections upstream and downstream... We also know that in the real world it’s not perfect optimization if someone still needs to cross the street. We want buses to get to their stops not early but on time. We want to make sure that this is something that can be adaptive and done in real time, not that we optimize it once.”