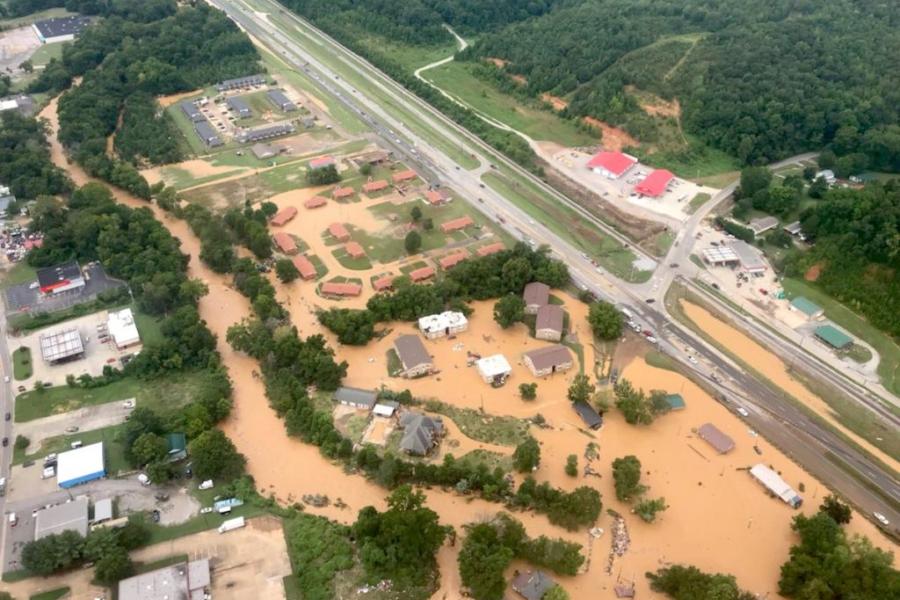 Devastating flooding hit the city of Waverly in 2021, becoming the deadliest single-incident in the city's history.

Following deadly floods earlier this year, a new coalition of local leaders has formed to help address flooding issues and protect communities across the state of Tennessee.

Logan Matthews, spokesperson for the Flood Ready Tennessee Coalition, said flooding has long been a concern for many communities throughout Tennessee, but deadly flooding in Waverly earlier this year served as the coalition’s call to action. The flood caused millions of dollars’ worth of damage and 20 fatalities, making it the deadliest single-incident in the city’s history.

“Flood Ready Tennessee launched in the aftermath of the devastating Waverly flooding, with 20 city and county mayors concerned about the flooding issues in their communities joining together to work with state officials to find solutions to frequent flooding,” Matthews said. “Flooding problems are not limited to historic events like we saw in Waverly, though. Flooding is a widespread problem in Tennessee impacting the state on average once every three days.”

Flooding is posing an increasing risk to communities across the state of Tennessee, costing both human lives and millions of dollars in damage and economic losses.

“Since 2000, the state has experienced almost 3,000 flooding events. Just this year, 29 people have died from flooding – that is tied for the most deaths of any state in the country,” Matthews said. “While the loss of life is the most jarring impact of flooding, the state on average suffers $243 million in damages from flooding each year according to report by the Tennessee Advisory Commission on Intergovenmental Relations (TACIR). Flooding threatens economic development because businesses will not invest assets in areas prone to flooding. In some communities, there is no undeveloped land available for economic development that is not in the flood plain. Further, frequent flooding poses significant public health concerns by affecting water quality, catalyzing mold and mildew growth in structures, and disrupting the movement of first responders.”

Dyersburg Mayor John Holden is no stranger to the damage flooding can cause to a city. In 2010, Dyersburg was struck by its worst flood in history, part of severe flooding incidents that plagued the state in May 2020.

“On May 4, 2010, we reached 9.21 feet above the flood stage on the Forked Deer River, which is about two blocks from city hall and where it comes through our city,” Mayor Holden said. “We didn’t get a lot of rain in Dyersburg, but all the rain in Nashville and the bad floods there impacted us as it traveled down the rivers and creeks. I got a phone call early that morning from our emergency operations and communications department telling me it was going to get bad. I remember thinking ‘It’s not even really raining.’ What we went through the next couple of days was pretty incredible.”

More than 450 structures were damaged during the flooding with numerous Dyersburg citizens having to be rescued by emergency personnel, largely in the southern part of the city.

“We had some help from federal aid through small business loans and help mitigate the losses, but we also lost a lot of population in that area,” Mayor Holden said. “A lot of people moved away. It adversely impacted our whole community. There was a lot of clean-up to do.”

Since 2010, two more floods have occurred in the city meaning that three of the four worst flooding incidents in Dyersburg’s history have occurred only in the past decade. Beyond the immediate damage seen and felt after a flood, Mayor Holden said there are other consequences of flooding many may not realize, such as its impact on agriculture and infrastructure.

“We are surrounded by flat land and have a lot of rivers that flow in our area,” he said. “We have highly erodible soil, a lot of agricultural land, and stream bank loss. We want to bring attention to that and come up with ways we can address some of those issues. We have sewer lines that run through some of these streams. As flooding occurs, the soil around those erodes and exposes the sewer lines. You then wind up with sewer breakages and those issues.”

By mitigating flood risk, municipalities, the state, and citizens stand to save millions.

“There are 395,208 properties in Tennessee that have greater than a one in four chance of flooding at some point in the next 30 years according to the First Street Foundation,” Matthews said. “These are homes, businesses, schools, fire stations, churches, and more that are at risk every time it rains. TACIR has estimated that investments in resilience would yield up to a 12 to one return in avoided losses, which is double the estimated national average of a six to one return by the National Institute of Building Sciences. This means investments made in flood preparedness and mitigation projects in our state will go twice as far. Making investments on the front end saves taxpayers millions in avoided losses. Increasing flood resilience is a fiscally responsible, common-sense step for Tennessee to take to protect Tennesseans and eliminate wasteful and repetitive recovery spending.”

The goal of Flood Ready TN is to not wait for floods to strike before taking action that can protect Tennesseans.

“We can’t stop the rain from falling or floods from occurring, but we are blessed to have modern flood mitigation tools and technologies at our disposal,” Matthews said. “Flood Ready Tennessee is advocating for more mitigation efforts on the front end, making our communities more resilient.”

Mayor Holden has joined the coalition not only to help mitigate flooding risks in his own city but to also help other communities from experiencing what Dyersburg has. 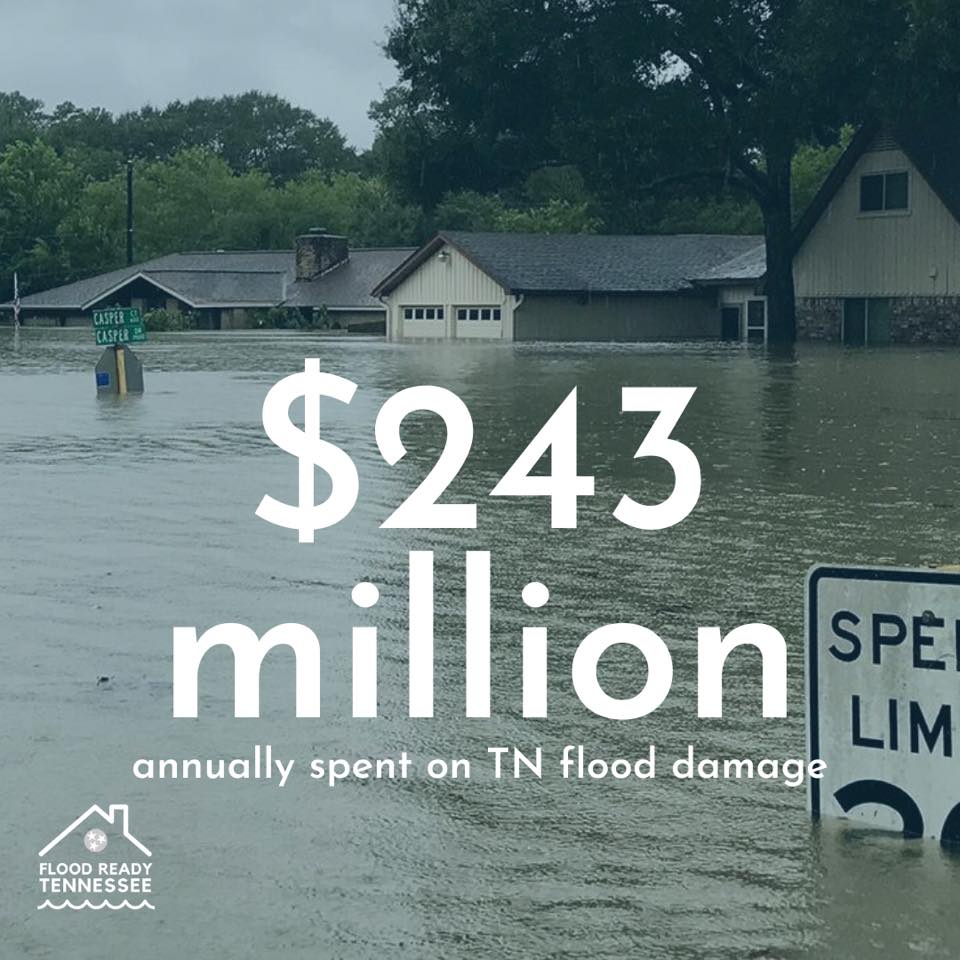 “We want to bring awareness to the issues that can occur and what flooding can do to communities,” Mayor Holden said. “This is a regional issue. We were affected by a rain event in Nashville 180 miles away. This is all about quality of life and economic development. We want this coalition to draw attention to this issue, to work with the state on projects, and find innovative ways to address these issues. You need the people upstream to get involved so what happens upstream doesn’t hurt the folks downstream. This allows everyone to know what is going on so we can work collaboratively.”

With numerous municipal leaders already members of the coalition, one of the goals of Flood Ready TN is for local leaders to be part of the solutions to the problems of flooding statewide.

“Flood Ready Tennessee would like state leaders to find ways to support communities in identifying, planning, and executing flood resilience and mitigation projects,” Matthews said. “This can be accomplished by engaging in coordinated, interagency resilience planning that spots the most vulnerable parts of the state to flooding and prioritizes regional projects across municipal boundaries. Financial constraints often preclude communities from exploring resilience projects. The state needs to establish a new fund that provides grants and low interest loans to communities specifically for flood control and resilience projects or to assist communities in matching their portion of federal grants. Technical assistance is another obstacle facing communities. The state must assist by providing dedicated experts to aid communities in grant applications, project planning and execution, and financing options.”

One of the goals of Flood Ready TN is to bring in stakeholders like community leaders, the agriculture industry, the Tennessee Department of Environment and Conservation and others to meet flooding issues head on.

“Flood Ready Tennessee is excited to work with TDEC, TEMA, and other agencies to amplify the great work they are already doing and to find the best ways to increase our preparedness when it comes to the flooding we know is going to happen,” Matthews said. “TEMA has worked with others to develop LiDAR mapping of the entire state. Communities can access this data to enhance their floodplain maps to better understand their risk. TDEC has piloted resilience projects alongside their drinking water and clean water revolving loan fund projects. In Dyersburg, this initiative has worked to make the sewer system more resilient to flooding by stabilizing creek banks. The state has also dedicated $1.3 billion in American Rescue Plan dollars to incentivize water infrastructure projects.”

Local leaders who want to get involved in the coalition can visit https://floodreadytn.com/.