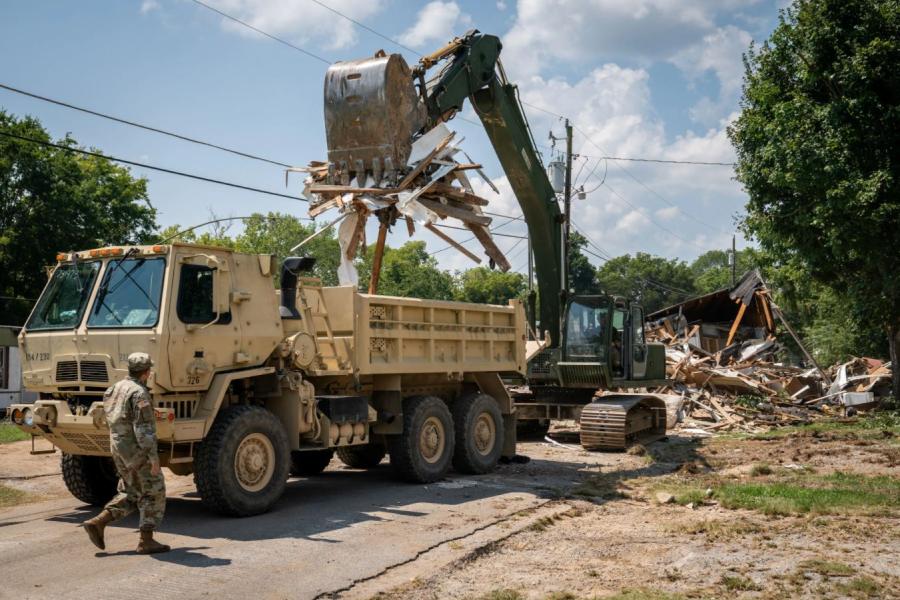 Debris is removed from Waverly. While there is still debris from the flood around the city, new homes and businesses are being built back.

What began as a normal Saturday morning quickly turned into the most catastrophic single event in the history of the city of Waverly.

On Aug. 21, 2021, an estimated 21 inches of rainfall came down in Waverly, contributing to the worst flooding incident in the city’s history. Waverly has seen three major flooding events since 2010, but the most recent event led to 20 deaths and damage to hundreds of properties across the community.

Waverly Mayor W.B. “Buddy” Frazier said the city had experienced flooding before and was even on a list of cities requesting federal flooding assistance and mitigation. However, a perfect storm of high rainfall and a dammed railroad bridge led to disastrous consequences.

“We had a 21-inch rainfall and a railroad bridge became blocked with flood debris,” he said. “No one knew that 50 million gallons of water was being held by back to the point it breached the CSX Railroad. It literally washed the railroad out and then came washing down this valley into our town.”

By the end of the day, nothing would be the same in Waverly.

“There was disbelief to see the magnitude of the damage, how widespread the damage was, and the loss of life,” Frazier said. “The loss of 20 lives in a community this size is a major loss of life. The age of some of those we lost was really impactful because we lost some children in this event. There were families who were cut off. We couldn’t get in to them until the flood waters receded. The county 911 center equipment went down and our calls had to be transferred to neighboring counties. It was a very critical time for us in those first few hours. It’s something I wouldn’t wish on anyone.”

Frazier said it took several days for rescue and recovery efforts to account for those displaced and missing from the floods.

“In the first few days, we focused on search and rescue,” he said. “We had a pretty large number of people who were unaccounted for. It took a few days to get good information and get those people located. We had to get good identification for them. That was a pretty difficult and lengthy process.”

Frazier said a little under 400 homes within the city limits received some sort of damage as a result of the flooding. More than 160 homes in Waverly have been demolished or will be because their damage was too severe to repair. FEMA has inspected more than 1,000-flood impacted homes in the reason and processed more than #5 million in insurance claims. FEMA and the Small Business Administration have also distributed more than $9 million in the community.

Of course, the structural losses that may have had the biggest impact on the community are the loss of two local schools.

“We had three schools inside the city, and two of them have been relocated to other schools within our county. That has caused a major hardship on parents,” said Frazier. “Work is going on today for a temporary school with 68 classrooms that will fill that need in the short-term while the board of education works on a long-term plan. One of the things we are thankful for is that if this event had to happen it happened on a Saturday morning and not on a day when those schools were in session. The way those schools flooded there is no way those students could have been saved from those buildings.”

The city of Waverly itself also saw the loss of structures and equipment, including equipment that could help in the cleanup process.

“We lost our entire public works complex,” Frazier said. “We lost basically everything we had to work with, our heavy equipment, our machinery, and our vehicles. In the first few days I would ask the public works director to do something and he would remind me we didn’t have that equipment anymore. That was coupled with the loss of our water supply. We had to get a temporary water supply in here, including bottled water and distribution points for that. We take those things for granted every day in municipal government. I never dreamed I could lose them all in one morning like we did.”

In the wake of the disaster, Frazier said he had to keep a positive face for Waverly citizens.

“I thought on the front end that I had no idea how we were going to recover,” he said. “But then I thought ‘I’m the mayor.’ Of all people, I had to be positive and make people think there was a way out of this. A lot of times I would tell people I don’t know what the answers are today, but I know we will get through it and find those answers.”

“The response the day of the flood was just overwhelming, how our friends and neighbors came to us in that very critical time. Everything from swift water rescue teams to organizations providing meals and bottled water came to Waverly. This went on for weeks after the event. We would see private food vendors bring their trailers, set up along the side of the street, and feed anyone who needed a meal. I can’t speak highly enough of all the disaster relief teams who came and who are still here today.”

“We have been well blessed with this response, and we know we aren’t in this situation by ourselves,” Frazier said. “So many Tennessee mayors reached out to me during this time. I appreciate every one of those calls and offers for assistance. I know a lot of cities sent equipment and manpower. We are so appreciative of that.”

Donations ranging from water heaters to mattresses to construction supplies to furniture to basic necessities were brought to the city, much of which is being stored in a warehouse in the city for distribution to residents in need.

In addition to aid from local cities and community organizations, Waverly Central High School students were given a Homecoming to remember when officials with the Tennessee Titans found out the team no longer had a homefield to play on. Waverly played against White House at the first high school football team ever hosted by Nissan Stadium, an event Frazier said students will remember the rest of their lives.

Frazier said complete recovery may be years in the future.

“We have moved into the long-term recovery,” he said. “Seven months out, we are still removing debris. My thinking is when we get rid of all of the debris we will start the healing process. We are starting to see things kind of back to a bit of normalcy. What is so eerie is driving through a subdivision that had two dozen homes and is now all vacant lots. Recovery is going to be years in coming. Every day, something gets done. We get a little bit better and a little closer to that final recovery every day. I feel this could easily be a 10-year process.”

The city recently held a groundbreaking for the first of 25 homes being reconstructed by a disaster relief organization and Frazier said numerous businesses have had their site plans approved for reconstruction by the city.

The city itself has also recovered most of the equipment it lost in the flooding, though supply chain issues are holding up some equipment, including two wastewater pump stations. The city is also buying a temporary facility to house its public works facility so they can move out of a fire substation in the city. A new facility for public works is being planned as well.

Flood mitigation projects are also a part of the recovery process. The U.S. Army Corps of Engineers is doing a floodplain management study and the Natural Conservation Resources Service is also conducted a watershed study. Frazier said Waverly is looking into the long-term to make the community safer from flooding events.

Two major results from the flood have had a statewide impact. The first is the foundation of Flood Ready TN, an organization of local leaders advocating for up-to-date flood plain maps and plans for cities across the state. Another is a new policy that requires all Tennessee schools in floodplains to be moved to higher ground.

While many members of the community still have high concerns surrounding high rainfall events, Frazier said the flood has brought the community much closer together.

“It has shown us how fragile life is,” he said. “It has shown us how things can change in a moment’s notice. Waverly wasn’t on Easy Street by far, but we were seeing economic growth and for a small town we were comfortable economically. In the course of a few hours, we had all that taken away. It’s a situation of such a magnitude that we have all had to pool our resources together to get our town through it.”