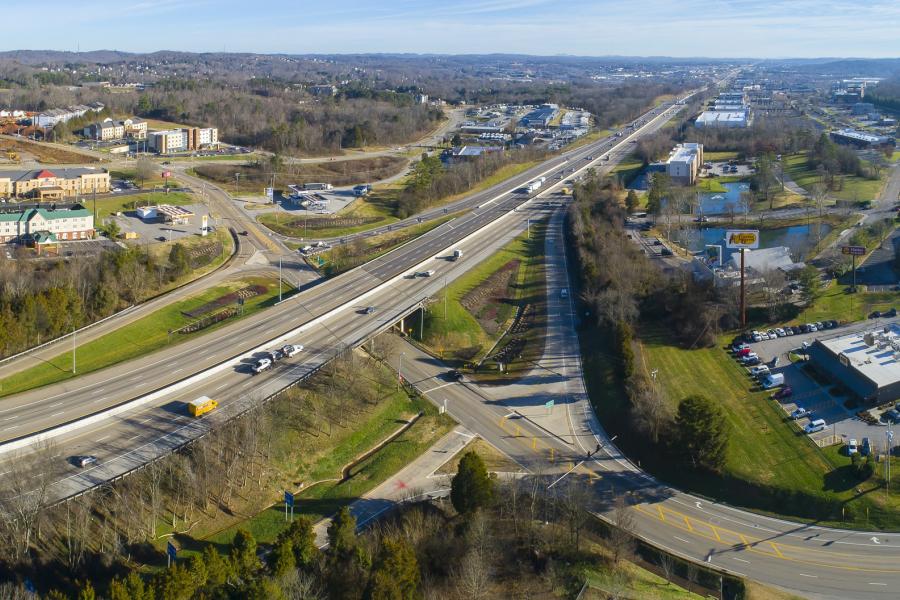 One of the projects proposed as part of Gov. Bill Lee's transportation budget is a $48 million improvement project to the Interstate 40-75 Interchange at Campbell Station Road in Farragut. Of the 22 projects proposed in the budget, at least 12 are within city limits.

A dozen cities will benefit from more than $600 million worth of transportation investments outlined as part of Gov. Bill Lee’s FY22-23 Budget proposals.

The Tennessee Department of Transportation (TDOT) would be able to fund a list of 22 projects planned across the state.

“We have an obligation to future generations to invest in our roads and bridges and propel economic growth,” said Gov. Lee. “Tennessee’s strong fiscal position allows us to make strategic investments in infrastructure and ensure progress on critical projects across the state.”

TDOT stands to gain $626.5 million that will go toward accelerating IMPROVE Act projects, interchange improvements in rural areas, and road infrastructure projects in our fastest-growing counties, to name a few.

“Tennessee is one of only five states with no transportation debt,” said TDOT Commissioner Joe Galbato. “We are excited and grateful for the additional funding that will no doubt keep us in good financial health and accommodate the ever-growing needs of our citizens.”

Farragut Mayor Ron Williams said the two projects would be of great benefit not only to Farragut but to the surrounding communities and East Tennessee in general.

“On behalf of the Farragut Board of Mayor and Aldermen, I’d like to thank Governor Bill Lee and his staff, along with our hard-working legislators—Jason Zachary, Richard Briggs, Becky Duncan Massey and Justin Lafferty—for proposing funding for improvements to the Campbell Station Road/I-40/I-75 interchange,” Williams said. “This redesigned interchange would be beneficial for all of East Tennessee and would significantly ease congestion in both Farragut and Hardin Valley. Upgrades to this critical interchange have been discussed for two decades, and our board has pushed hard to make it happen, so we are incredibly thankful that Governor Lee has proposed this important infrastructure investment for our community.”

The budget calls for three transportation projects centered around economic development. In Maryville and Alcoa, the budget includes $15 million for the widening of State Route 334 at Louisville Loop and Proffitt Springs Road. A second $40 million project would improve the Cleveland Street Extension and I-24 Underpass in Nashville, and a third $22 million project would realign Meadow Park Lane to Riverport Road in Kingsport near an Eastman Chemical Company.