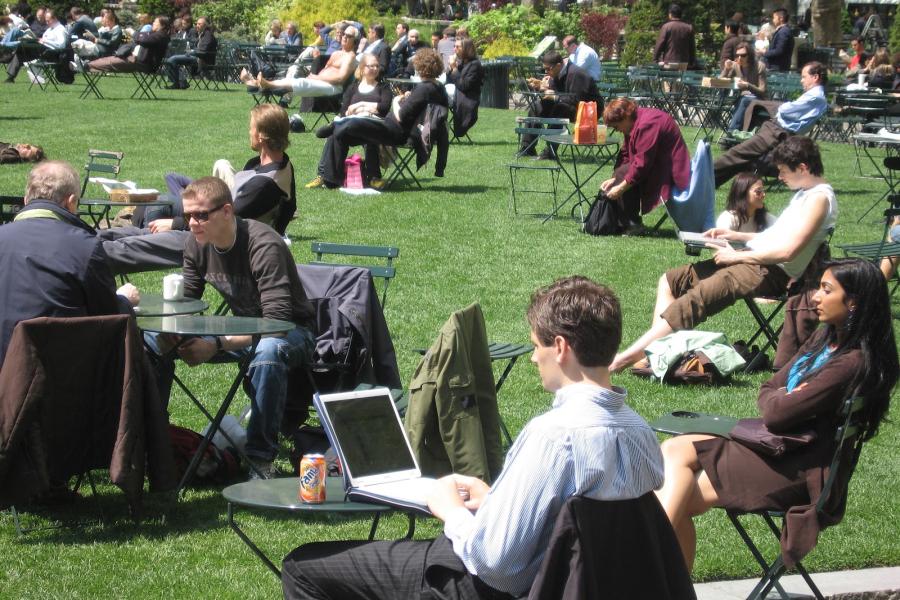 Free, public wifi has become a staple of many public spaces as the need for wifi to power laptops, smartphones, and other smart technology becomes a part of every day life for citizens. Technology is becoming a more integral part of public spaces as technological solutions drive digital art, security, organizational needs, and government solutions.

With technology becoming a more evolving and integral part of public spaces, local leaders are considering how to use this technology to address digital divides and provide more data-driven government solutions while still balancing the need for personal privacy.

Next City and the Knight Foundation co-hosted a webinar titled “Public Spaces and Technology” focusing on how cities across the country are integrating technology in new ways in their public spaces as well as the best ways to use that technology for the public good.

Meg Daly is the founder and president of Miami’s Friends of the Underline, a 10-mile linear park and urban trail below the city’s Metrorail system that will eventually connect three cities: Miami, Coral Gables, South Miami, and Pinecrest.

The project has incorporated technology in a number of ways ranging from offering free public wifi to address digital divides in adjacent neighborhoods, offering digital and interactive art exhibits, and the creation of an augmented reality scavenger hunt mobile game that connects smartphone users to local history and nature. In addition to these public offerings, Daly said the Underline is using technology for its operational side as well.

“We worked with a local university, FIU, to create something we call MVP,” Daly said. “It’s an event scheduling system for the Underline. So, if someone wants to offer a free yoga class, they can do that and we don’t have to do a sort of top-down scheduling. Other things we are working on is using the Underline as a linear lab to test public space initiatives from throughout the world. We have 10 miles you can test on through many neighborhoods that are very diverse. We are thinking how can we use technology for fundraising, storytelling, education, art and culture, and for the larger ecosystem of the park, such as event management and security. We would love to be able to employ technology to show how many people are here, who they are, and how they and the park connect.”

Asima Jansveld is managing director of the High Line Network, a group of infrastructure reuse projects including the Memphis Riverfront and the Miami Underline, and said one of the focuses of the organization has been working with these projects to incorporate technology in public spaces in ways that will help provide solutions to common community issues.

“We need to think about using technology not just to address what have been traditionally technology challenges but what we think of as non-technology challenges,” Jansveld said. “By far, the two biggest ways we found that can be done are through community engagement challenges – which can include surveys, translation signage, interactive displays – and park utilization. People want to see how their parks are being used, how can we count who is there, how can we see its capacity, and how can we see the demographics of who is there. The three smaller ways were security, park operations, and fundraising.”

While there is a desire for these technological solutions, Jansveld said a large majority of organizations surveyed did not feel they had the capacity or ability to incorporate technology to achieve these goals. The biggest barriers for incorporating more technology into public spaces are cost, capacity, and expertise.

Daly said technology is already ubiquitous in public spaces, and we must begin investing in the capacity for it now so that investment can be built upon later.

“We are investing in public spaces because children expect technology to be everywhere and available to them,” she said

Bryan Boyer, founding director of the urban technology program at the University of Michigan, said we are now living in an era where our experience in public spaces is determined as much by brick-and-mortar as it is by technology. As a result, leaders shouldn’t assume that bringing technology into public spaces will decrease or eliminate human interaction in those spaces.

“Technology is here; it’s part of 21st century life, yet it’s not the focus for any of us, it’s the enabler,” Boyer said. “I’m tired of the fact that people with clipboards is still seen as the answer to figure out what is going on in the public realm. We need to understand the human element, but we also need to have data at scale that can make persuasive arguments. We need to be adept at balancing both personal stories and the scale of automated data collection.”

Boyer said various cities have used technology in unique ways to improve public spaces, such as Boston using satellite surveys to do an urban tree inventory, Detroit using computer vision along its riverfront to determine how patrons were using park space to plan for future investment, and London using crowdsourcing polls to direct government decision making.

Technology is also changing out public space is used, such as the use of curb-side space in a world where overnight delivery and transportation services like Uber and Lyft have made curbs more premium space. As a result, Boyer said technology is changing how cities are being planned and operating to make physical spaces more functional and safer.

Daly said the Underline utilizes smart technology to track devices entering the Underline to get a count of how many people are visiting the space. While the demographic information available is invaluable, there is a need to delicately counterbalance collecting information that move government forward and preserving the public’s privacy.

Jansveld said there is still much work to be done on creating that balance.

“There is tremendous opportunity for inclusion and engagement around collecting data from users in the private realm, but around that there is such an incredible question about privacy and the boundaries,” she said. “If I say to you, the wifi is collecting information about how many people are in this space, most people will say that feels right. If I say when you log into the public wifi we have access to your top three Spotify playlists so we can use that data to decide what kind of concert to do in the park, that gets a little murky.”

Daly said one of the ways the Underline has helped ease public concerns about data collection is by putting guardrails on how data in public spaces can be collected from the initial planning stages of a project. Daly said there are rules in place about who can collect and use data as well as how users are protected.

“One of the things we have been doing at the university is work around making computer vision accessible to people on the sidewalk as an interactive experience,” he said. “They learn where the limits are, how technology sees them, and how they see it. We have to think about literacy, policy, and other questions. It’s hard to have those more in depth conversations when basic understanding needs to be developed on a broader scale.”