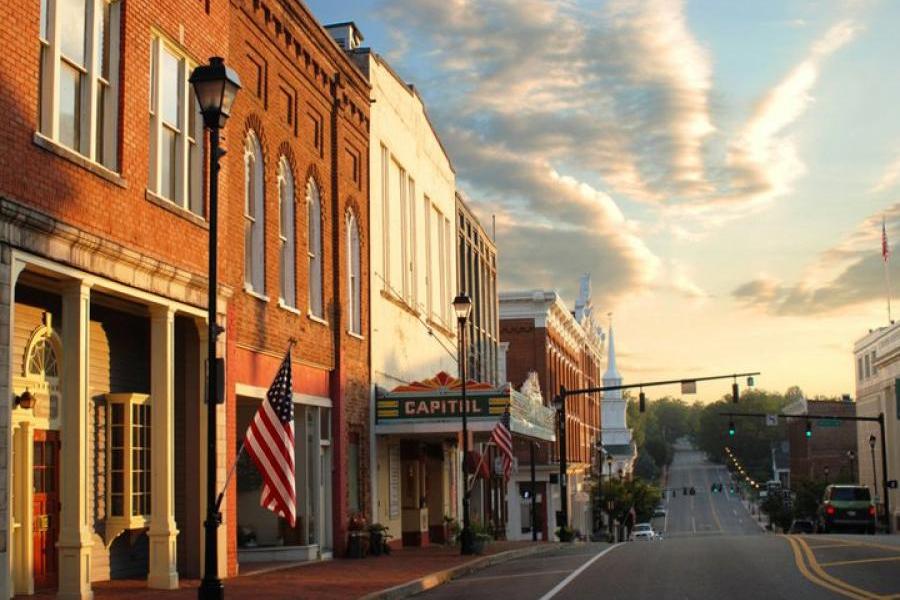 After changing their form of government, the town of Greeneville set new priorities and missions for city government including finishing downtown improvements, installing community broadband, and building better relationships with citizens.

The town of Greeneville recently undertook the progress of changing their government to a council-manager form, which has served as a catalyst for significant improvements to both how the town’s municipal government function and created positive momentum for the entire community.

In recognition of the considerable efforts made by the town of Greeneville to improve municipal government both inside and out by setting and achieving new goals to better their town, the Tennessee Municipal League is pleased to present Greeneville with an award for Small Town Progress.

The town of Greeneville made the decision to undergo the difficult process of shifting their government style from a mayor-council form to a council-manager form as part of efforts to completely overhaul the way the town conducts its business. The result was the hiring of Todd Smith as the first Greeneville town manager as well as a shift in roles for both the Greeneville Board of Mayor and Aldermen and city staff.

The Greeneville board shifted its focus toward policy and more accountability and efficiency expected from the staff, while local leaders developed a new mission statement and set new goals for guiding the community as a whole.

Soon, the changes implemented at town hall were being reflected in positive growth and change throughout the town itself. Town leadership set goals for Greeneville including facilitating broadband throughout the community, finishing downtown redevelopment, and connecting better with citizens.

Another major capital improvement project on Greeneville’s agenda is expanding the town’s fire department. To ensure facilities meet the department’s needs, employees have been involved in the planning, design, and purchasing involved in the construction of a new fire station and the acquisition of a new pumper and ladder truck.

Individual teams have met to determine the needs of the department in the fire service area, for equipment and vehicle storage, and other needs throughout the design process and then met with the town’s architect to create a final plan that not only meets department needs but also includes a back-up emergency operations center in case of extreme disaster.

As a result, the project was able to secure federal dollars. Firefighters also used their experience and feedback to ensure that a new truck purchase would meet the town’s needs, ensuring that funds spent on the project were used wisely.

During the COVID-19 pandemic, the town’s Roby Senior Center continued with important outreach to the community. Employees of the center shifted their focus to crafting protective masks from donated materials and giving them away to community members in need.

With meals being one of the center’s most important services, employees also began operating a drive-thru meal service for those seniors who rely on the center for daily lunches. To combat loneliness in those seniors who relied on the center for interaction, employees also developed special drive-thru events at Thanksgiving, Christmas, and on Aging Americans Week, giving out small gift bags and meals so that area seniors could still feel a strong sense of community connection without compromising their health or safety.

By re-evaluating their form of government, the town of Greeneville has begun a top-down process that has led to improvement in all areas of city life. As both short-term and long-range goals are met, town leadership continues to look for new projects and efforts that will better both the operations of municipal government and the lives of citizens.