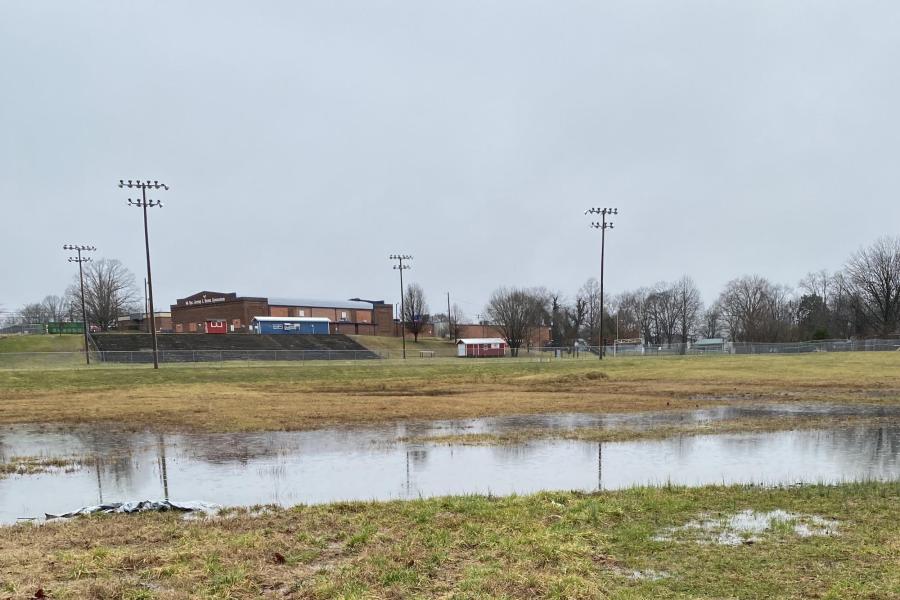 Drainage issues have created flooding behind a local McMinnville elementary school and in a nearby neighborhood. By taking a green infrastructure approach to solving the problem, the city has been able to leverage more resources and turn the flooding problem into an opportunity to bring the community together.

When faced with a flooding issue that was negatively impacting a local school and neighborhood, McMinnville leadership decided to think outside-the-box to solve an infrastructure problem in a way that will connect education, flood mitigation, public recreation, and the city’s reputation as the Nursery Capital of the World.

Ongoing flooding in a field behind the city’s Bobby Ray Memorial Elementary School was damaging local homes and infrastructure in McMinnville. Rather than installing traditional pipes and concrete infrastructure to address the problem, Ming in conjunction with Stormwater Manager Lyndon Bussell, decided to take a modern, green infrastructure approach that has brought in local education leaders, the University of Tennessee, local businesses, and civic organizations to work with the city for the betterment of the entire community.

In recognition of the dedicated efforts made by the city of McMinnville to find unique solutions and bring community buy-in to solving a local stormwater issue, the Tennessee Municipal League is pleased to present McMinnville with an award for Excellence in Stormwater Management.

While in his previous role as McMinnville’s Community Development Director, City Administrator Nolan Ming had connected with UT Institute of Agriculture research coordinator Dennis Gregg about finding a project that could bring together local contractors and nurserymen for education on-site about the utilization of native plants as a form of natural erosion control, stormwater management, and parks maintenance. That project came in the form of the fields near Bobby Ray Memorial Elementary School and a McMinnville neighborhood.

The low-lying area behind the school left nowhere for water to go when it accumulates. New pipes and traditional modes of infrastructure would be too costly and likely not solve the flooding issues. Drawing on his background in stormwater management while in his role of Community Development Director, Ming knew that using native plants and vegetation – such as those raised in nurseries throughout the community – could both mitigate the flooding and stormwater run-off issues while creating a beautiful natural landscape in the heart of McMinnville.

The idea soon evolved into the creation of a new park featuring a wetland restoration that would serve not only for community recreation but also as a way to educate students and the public at-large about the importance of wetlands. The project was dubbed the Bobby Ray Wetland Project both because of its location near the school and in honor of McMinnville native Marine medic David Robert “Bobby” Ray who earned the Congressional Medal of Honor after giving his life during the Vietnam War.

Education has already become a big part of the project. McMinnville Stormwater and GIS officials gathered input from elementary school teachers on ways they could use the park for outdoor education, which has led to plans for picnic tables and a community garden where both students and local residents can learn about how their food is grown. Engineering students from UT have also been involved in the project, both benefiting

their own education by helping with the design and planning for the project as well as working with elementary students to education them about wetlands and conducting pH testing.

The city is also partnering with local FFA and 4H programs, the McMinnville Gardening Club, scouting organizations, and the local Rotary and Exchange clubs to install plants and walkways in the park while the plants themselves will be donated from the local nurseries in the area.

What began as a stormwater mitigation project has evolved into a project that is touching a myriad of aspects of life for McMinnville residents including food, education, outdoor recreation, environmental conservation, and community involvement. The new Bobby Ray Wetland Project will provide a park in an underserved area of the community and manage an ongoing environmental issue in a way that is not only creative but also bringing together different groups from across McMinnville to make a positive change in their city.