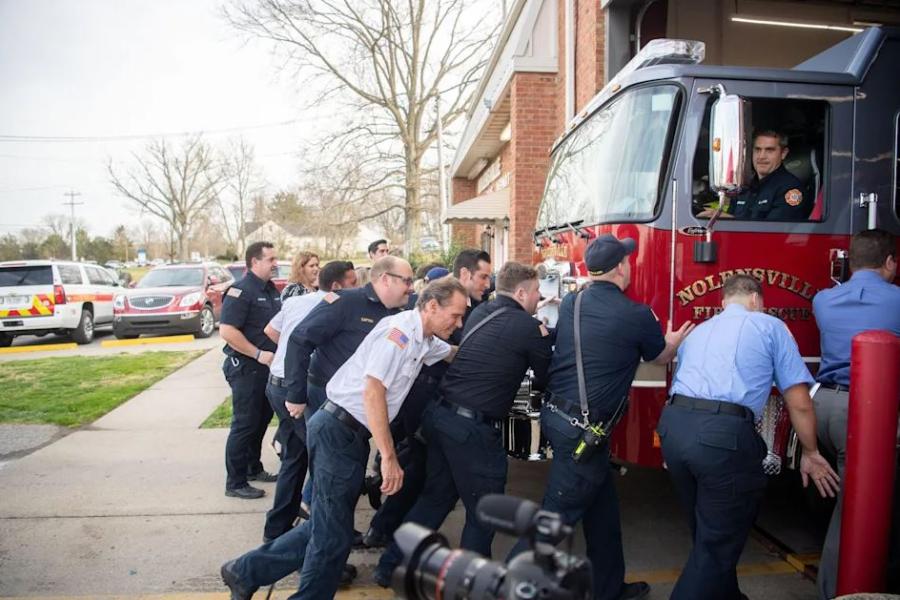 Members of the Nolensville Fire Department hold their first-ever “push-in” ceremony for a new engine only around a year after the department went from a volunteer organization to a full-time one. Creating a new fire department is just one of the many big changes being made in Nolensville as city officials look toward future growth.

When the town of Nolensville voted to change its form of government to a manager-commission style last year, citizens and staff both expected to see changes in city operations.

Since then, the town has made efforts to expand its fire, public works, and finance services as well as undertaken new projects aimed at improving the community over all.

In recognition of the forward-thinking efforts made by the town of Nolensville to provide the best quality service to customers and expand the scope and size of municipal operations, the Tennessee Municipal League is pleased to present Nolensville with an award for Small Town Progress.

The town established its first-ever full-time fire department, which began operations with a new chief, 10 career firefighters, 26 volunteers, and 23 part-time employees on July 1, 2021. The department responded to more than 1,000 calls in its first year alone, serving more than 14,000 residents in the town limits as well as another 4,000 county residents through relationships with Williamson County.

Beginning in a loaned facility and with borrowed equipment, the Nolensville Fire and Rescue Department also held its first-ever push-in ceremony to celebrate the arrival of the new Fire Engine 16 in the town in April of this year.

Other equipment purchases made by the department include two Life Pak defibrillators, 16 self-contained breathing apparatus, portable radios, three smaller vehicles, hose, and more. The department is presently applying for two FEMA grants to further add to equipment and staff. Plans are now in the works for a new fire station to open in 2024 and a second station planned as part of long-term growth for the town in the next seven to 10 years.

Concerns about transparency and a desire to improve financial services led the town’s finances team to reorganize the finance and human resources department into separate departments. Now in its own organizational structure, the municipal finance department began implementing a fund balance policy, which has served as a catalyst to develop municipal projects, such as infrastructure for the new fire department.

The adoption of this policy by the town council also allowed for the creation of a capital improvements fund, a capital improvements advisory committee, and a multi-year capital improvements plan. The finance department further took on the responsibility of revising the town’s outdated debt management policy, adopting a new financial policy, implementing new software for financial services, and finding other ways to improve performance and efficiency. Nolensville’s finance department also received the GFOA distinguished budget presentation award for its 21-22 fiscal year budget, one of only 18 government entities in the state to do so.

After public works employees were forced to hand-spreading salt on major roadways following a minor snow incident, the decision was made to expand the size and scope of services undertaken by the department. This also meant adding new equipment to the department.

Nolensville Public Works Director Kyle Billingsley developed a five-year growth plan for the department, outlining the need for equipment and employees. Two employees were added in the 21-22 budget year along with the first snow plow and truck-mounted salt spreader.

Nolensville public work crews also proposed new initiatives for their department including in-house sidewalk repair to save funds that could then be better used elsewhere. Expanded stormwater and drainage tasks were accomplished through equipment rents and crew members went to conferences to learn new techniques and gain experience with new equipment. These initiatives saved the town approximately $100,000 and helped resolve drainage issues that have been significant for years.

The public works department has also had a hand in many beautification projects around the town as well.  Other beautification efforts undertaken by the town include the first Keep Nolensville Beautiful Day this past May and the town receiving a Tennessee Wildlife Resources Agency (TWRA) grant for the cleaning of Mill Creek, which saw three-quarters of a mile of the creek cleaned by town staff and local volunteers.

Community events, like Nolensville Nights, are also bringing citizens together in the town’s historic district. Local businesses, artists, performers, crafters, and others showcase their talents at business locations throughout the district.

Town officials recently hosted an open house with local business leaders to discuss their vision for the community.

The town is also in the middle of overhauling its zoning ordinance to help facilitate positive growth in the community. These are just some of the many ways that town leadership is looking toward Nolensville’s future.