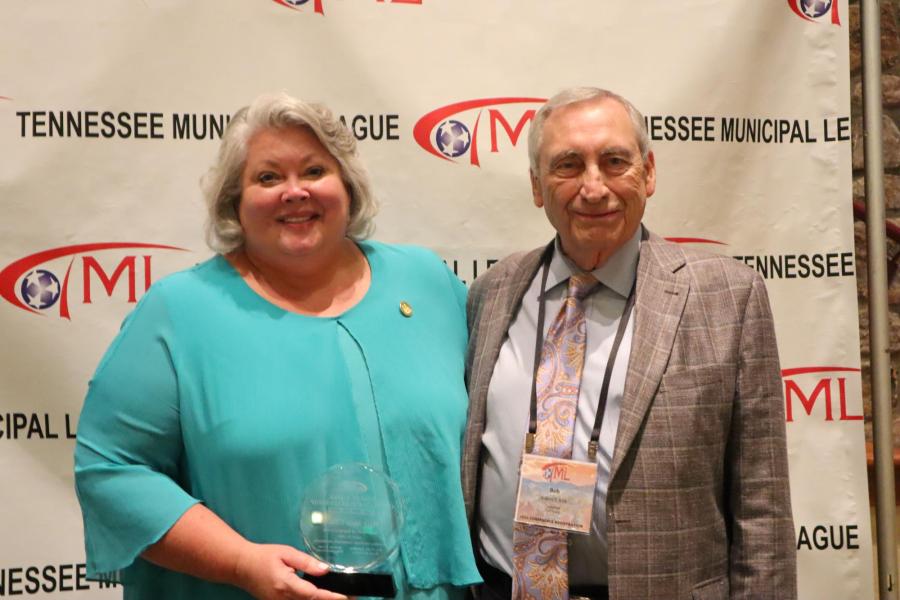 The Bob Kirk Local Government Leadership Award is presented to the council member, alderman, or commissioner who is at least in their second term of service to their municipality and has shown themselves to be an outstanding public servant to both their municipality and their community. The award is named for Dyersburg City Alderman and TML Past President Bob Kirk who served his city for nearly 51 years as an elected official with great esteem and continues to go above and beyond the call of duty to better his community.

Known for her hard work and dedication to causes both in her community and those that have regional and even statewide impact on local governments, Gibson is known for her perseverance in seeing projects through to completion and for always wanting to share credit for the fruits of her labor with others.

First elected as an alderwoman in 2014, Gibson is presently in her second, four-year term and served as the city’s vice mayor in 2019 and 2020. A lifelong Germantown resident with a family tradition of servant-leadership on the local, county, regional, and state level, Gibson has served in appointed or elected office for more than 20 years. Germantown Mayor Mike Palazzolo said she is held in high esteem by her peers on the city’s Board of Mayor and Aldermen.

“Alderman Gibson has served for more than a decade in a thoughtful, inclusive and deeply caring capacity as a citizen-servant,” Palazzolo said. “She consistently eschews public recognition in favor of reaching the fulfillment of seeing a project or program successfully implemented with as much participation as possible, and with always the constant intent of sharing success among all participants.”

Gibson championed the 2018 comprehensive parks masterplan for the city, led the effort to plan for a 50-acre premiere sports complex, and helped expand the city’s award-winning greenway system. She continues to support Germantown’s regional healthcare presence and work she has done in promoting retail and lodging has resulted in a 28% increase in sales and local hotel/motel revenue collections.

Outside of Germantown, Gibson has also worked for the betterment of municipalities across Tennessee.  Gibson was an inaugural member of the Tennessee Municipal League’s Municipal Advocate Committee (MAC), serving during the past three legislative sessions.

As member, Gibson was responsible for developing and maintain relationships with both state lawmakers and municipal officials across the state, working with TML staff on strategic outreach, communication legislative priorities to state lawmakers, and meet with state lawmakers.

During her service on MAC, Gibson was noted for leading Germantown in writing resolutions to support TML legislation favoring critically important sales tax reform, authoring editorials in favor of the legislation, speaking at various civic organizations to promote the cause, and leading a letter and email writing campaign to the General Assembly.

Prior to her service on the Germantown Board of Mayor and Alderman, Gibson also served her community as a district board commissioner for the Shelby County School Board. She has served in numerous other leadership roles in the community including as vice chair for the Germantown Parks and Recreation Commission, chair of the Farm Park Advisory Group, second vice president of Germantown United Methodist Women, and as a member of the Germantown Arts Alliance. Gibson currently serves as a board member on both the Friends of the Bobby Lanier Farm Park and Leadership Germantown Executive Board.

During the floods of 2010, she served as a disaster relief coordinator for Germantown United Methodist Church and has also served in volunteer positions including confirmation coordinator and youth advisory council member. She is a graduate of Leadership Germantown and received the Jim Roberts Leadership Award in 2000.

She is a member of Germantown United Methodist Church where she and her, Steve, were married 31 years ago. They have three adult children: Morgan, Marshall, and Madison Gibson.