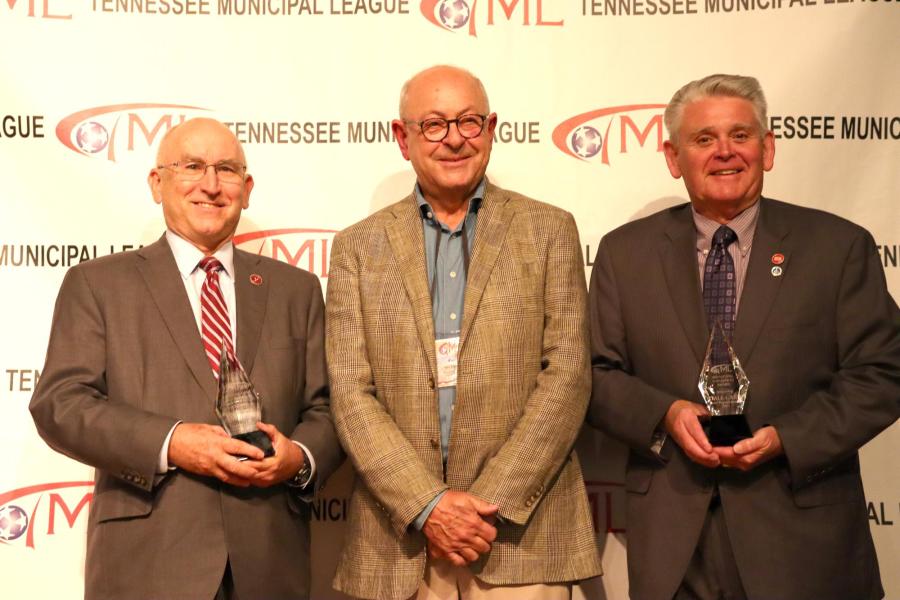 The Tennessee Municipal League is pleased to announce the recipients of the 2022 Municipal Champion Award.

The award was created this year to recognize individuals that have worked tirelessly to advance municipal interests and the citizens they serve. The inaugural award recipients are Tennessee State Sen. Richard Briggs (R-Knoxville) and Tennessee State Rep. Dale Carr (R-Sevierville).Briggs and Carr were presented with their awards at the 82nd Annual Tennessee Municipal League Conference in Gatlinburg.

Sen. Briggs and Rep. Carr have both demonstrated steadfast support and commitment to both local government officials and the citizens they serve. Both have an established record of recognizing that the desires, preferences, and priorities of individual communities across the state vary. And therefore, they both consistently advocate for the preservation of the rights of residents and the elected leaders of a community to determine what is in that community’s best interest. They have both worked tirelessly to protect against infringement on local authority or ward off intrusion on the interests of municipal residents.

Both have also served in local government themselves. Briggs served on the Knox County Commission before his election as a state senator.

Carr served as an alderman for the city of Sevierville before being elected to the State House.

“As a Sevierville alderman, Rep. Carr worked hard for our citizens, and he has continued to do so as a state legislator for all of our cities,” said Sevierville Mayor Robbie Fox. “He has always stood at the side of local government to promote and protect our collective interests.”

Briggs and Carr also have long, distinguished records of service on local government committees in their respective branches of the General Assembly. At present, Sen. Briggs serves as the chairman of the Tennessee Senate’s State and Local Government Committee while State Rep. Carr has previously served as the chair of the State House Cities and Counties Subcommittee and is presently chairman of the House’s Property and Planning Subcommittee. Sen. Briggs and Rep. Carr regularly inquire into how they might be helpful to cities in Tennessee and are among the first to stand up and be counted on matters impacting local governments.

Both are also very effective legislators that have earned respect from their colleagues in the General Assembly. Their ability to call upon their vast knowledge and experiences in local government has proven invaluable in informing consequential policy discussion, debate, and decision-making.

Additionally, Briggs and Carr have sponsored, supported, and perfected numerous bills on behalf of local municipalities over the years, including co-sponsoring legislation to restore state-shared sales tax in their respective branches of the General Assembly.

“On behalf of the Town of Farragut, we congratulate Sen. Briggs for receiving this most deserving award. He has shown an unwavering commitment to public service and for his efforts in working to create policies that benefit communities across the state of representative of his district, and his leadership as Chairman of the Senate State and Local Government is vital to helping preserve local government authority in Tennessee,” said Ron Williams, Farragut Mayor.

“Rep. Carr has been an invaluable legislative advocate for cities and local interests,” said Sevierville City Administrator Russell Treadway. “He is certainly deserving of this award, and we want to join in recognizing him for his service.”