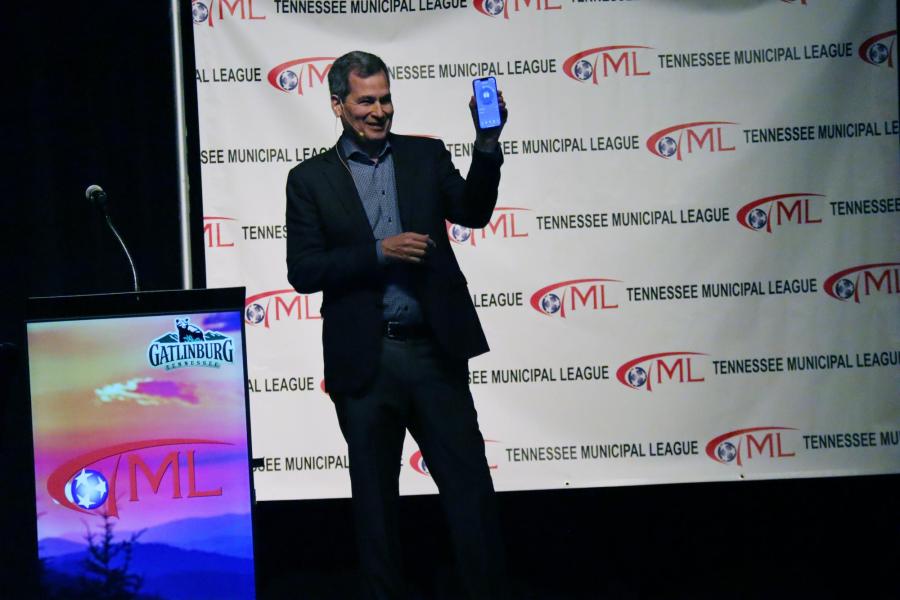 CBS correspondent David Pogue discusses technology made possible through what he calls the "sensor revolution" at the TML 82nd Annual Conference held in Gatlinburg.

Pogue focuses on new and emerging technologies, how they work – or don’t, and how these technologies have the potential to change the way everyday life functions.

While many talk about the iPhone revolution, Pogue said he is more interested in what he calls the sensor revolution, such as the 30,000 invisible beams of light the phone uses for facial recognition and other technology.

“I really think that the sensor revolution – the one that no one is talking about – is launching all these new products,” he said. “The first big success story here were the thermostats. The guy who invented the iPod also invented this. One day he was reading an article about how 50% of people who buy programmable thermostats never program them because they’re too hard. What this thermostat does is have near and far infrared sensors that detects when you’re home. It then sets itself to your preferences.”

These connected thermostats prompted what Pogue said was a “gold rush of the Internet of things” with companies trying to create more programmable “smart” devices to improve quality of life. Often, these products have had mixed results, such as products including tracking water bottle consumption, dog treat dispensers, and monitors for egg trays and toilet paper. Many of these devices require their own smart phone app to be used.

It was when smart speakers, like the Amazon Alexa, Siri, and Google Assistant, brought the functions of these many smart devices together that the industry began to get back on track.

“You don’t need an app, you don’t need your phone; You just say ‘Alexa turn on the lights,’ and it’s done,” Pogue said. “The whole Internet of things starts to get interesting when it gets larger, when you get build-ins, for example. This is revolutionizing a lot of industry and commerce. We have all these systems in every building, but they don’t talk to each other. If you go into your building late at night, you have to have a card to unlock the alarm system, turn on the lights, for the A/C to come on, and the fire system needs to be on. Now, they are making these things talk to each other so when an employee comes in all these things in the building know they’re there, and the building manager, from home, can monitor what is happening.”

Pogue said this allows for the “internet of cities,” which includes things like sensors in parking spaces that alert people when and where there is an opening parking space to reduce traffic. Another application is traffic light cameras that can change lights when there is no cross traffic to reduce carbon emissions and travel times.

Autonomous vehicles are another potential technology that could save the lives of 1.5 million people a year in car accidents. The combination of this with driver services like Uber and Lyft could revolutionize how people travel.

“They want to develop self-driving taxis that you will call from your phone, and that car ownership at home won't be a thing anymore,” Pogue said. “If 94% of your car’s life is spent parked, let’s make money while you’re not using it. Tesla wants owners to rent out their car unattended to people who need a ride when you’re not using it. You need to think about the future some day when people don’t need to park cars. All that land you’re using now for parking lots could someday be available for other purposes, if we could get self-driving cars to work.”

One way these technologies are combining is through drone delivery programs being piloted by companies like Amazon as well as electric vertical take and landing (eVTOL) aircraft designed for urban travel.

“This is going to be the biggest change for cityscapes because the whole thing is designed to bypass congestion and traffic,” Pogue said. “Building tops are going to be the new Lyft and Uber stops, essentially. It is a gigantic movement that gets hardly any press, but all these companies are pouring so much money into the concepts of air-Ubers. They have a short range and can’t fly many miles; 100 miles is the max. They can hold maybe two to three passengers and some will be self-driving while others need a pilot.”

Smart watches in particular are proving valuable in for public health outcomes as well.

“It’s incredible what they are packing into these things,” Pogue said. “On the back of the watch, you have green and red infrared lights that are flashing all the time. That is shining light through your skin, into your bloodstream, and measuring how much light bounces back. When you have a pulse, that’s a big glob of blood that shows more reflection and when it’s a thinner stream between pulses, less reflection.”

This allows the watch to measure factors like pulse rate, blood-oxygen levels, and even conducts EKGs with small electrodes. Watches also measure sleep activity, body temperature, detect and report falls, and have micro-sweat sensors that can monitor stress.

“Right now, the sensor technology is way ahead of the software that knows what to do with it,” Pogue said. “They have masses of data and they aren’t sure how to correlate it and tell you anything useful, but they are getting there. The big one is atrial fibrillation or Afib. Some 6 million Americans have this and it’s the most common type of arrhythmia. You can get a test for this at the doctors, but if it doesn’t do it right then, they don’t see it. You need something strapped to you at all times. These watches have saved hundreds, maybe even thousands, of lives at this point. It will tell you it noticed your heart rate is quivering and to get it checked out.”

At present, researchers are looking at ways smart watches can be used to detect other medical conditions like high blood pressure, type 2 diabetes, heart disease, respiratory issues, and sleep issues. Recent information has shown that smart watches have been able to detect COVID-19 in users three to four days in advance of symptoms because of changes to heart and lung functions.

Being able to combine the data collected from smart watches with other available data like weather, pollen count, pollution rates, and other factors could make it easier for companies to provide individuals with highly specific health advice.

However, Pogue said one of the things that has always held back technology is human concern over artificial intelligence and potential privacy overreach. For example, Pogue said 71% of Americans said they would never use autonomous vehicle technology.

“I think that’s fine because the technology is not there yet, but at some point, our terror over technology is going to get better and mistakes will get lesser until they overlap,” Pogue said. “In the meantime, we should think about the things that will go away as a result of this technology. You won’t need driver’s licenses or driver’s ed anymore because you won’t need to know how to drive a car. You won’t need car insurance because these things can go 80 miles per hour, two feet apart without hitting each other. Other things like speed limits, home garages, parking lots, and car alarms were all developed for people.”

In order to get people more comfortable with cities using smart technology, Pogue said transparency will be needed at every step, like published white papers online and public demonstrations.

“It’s a matter of baking transparency into the design, into the demos, and every step of the way,” he said. “I’ll give you one example. Drone delivery is coming quick and fast. The air traffic control system for airplanes was actually designed by NASA. The FAA has asked NASA how can we launch a drone delivery program in the U.S. without terrifying the public that they are being spied on. What NASA has thought of is an air traffic control for drones with an app for the public. If you aim your phone at the drone, it will tell you whose drone it is, what it is doing, and where it is going. A lot of push back is just fear of the unknown. You have to acknowledge that fear of the unknown is a thing, and change is difficult even if there is a shining better world ahead of it.”

Pogue said technology always has a way of overcoming the stigma.