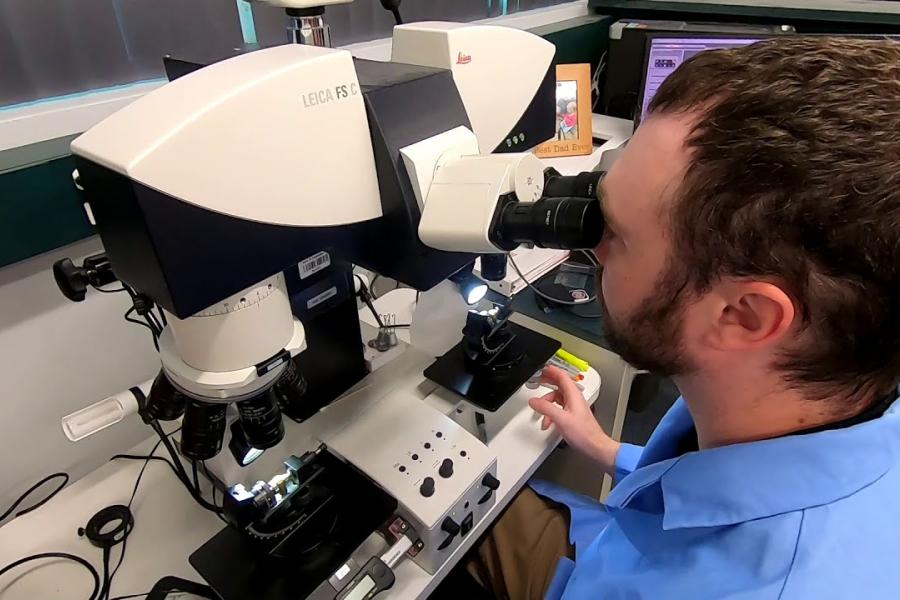 Additional funding to provide more forensic scientists at labs across the state is just one of the ways lawmakers are looking to reform criminal justice in the state.

A new ad hoc committee and an accelerated hiring process for TBI staff are two  ways lawmakers are confronting criminal justice issues ahead of the January legislative session.

McNally said the committee will explore several issues that may come up in the General Session next year.

“Criminal justice reform means different things to different people,” he said. “To me, it means we need to get tough on crime and the system needs to be reformed. I think it is no secret the two incidents in Memphis were the impetus behind the creation of the committee. I think it will be a good way to initiate the kinds of conversations we need to do to solve some of the problems that have existed. The committee has a pretty wide latitude to look into other materials in the area of criminal justice.”

Sexton said three major goals of the committee will be to examine at how the state applies credit served on sentences, how offenders can still receive credit served while violating prison rules and regulations, and how to ensure supervised probation for violent offenders once they do complete sentences.

“When you look at the Eliza Fletcher case in Memphis, what you saw was the offender got a lot of credit off of his sentence,” Sexton said. “However, when you look at his time in prison, he had over a dozen infractions for drug possession, weapons, indecent exposure, and using a cell phone frequently. So now, we are sitting here asking how this guy got 500 days credit off his sentence when he’s doing all this other stuff in prison. One of the things we want to look at is how did that happen. Just because you get good credit shouldn’t mean you should keep that time if you’re doing things you shouldn’t be doing. He was also released without any type of supervised probation. There are things inherently that we think are flaws in the criminal justice system.”

While the committee will come back with recommendations, Sexton said there are some issues he does expect to be addressed both by the committee and in session.

“I know that we will address the amount of good credit a prisoner can receive – especially when it pertains to receiving infractions in jail,” he said. “We are going to focus on juveniles, and we have started our roundtable discussions with law enforcement and district attorneys. I think what you’ll see is us working on a bill where if a juvenile at a certain age commits one of these violent crimes, you are automatically forwarded to adult court. I think you will see a move in that direction.”

In addition to the criminal justice issues, the committee may also study issues that may not entirely revolve around crime, punishment, and the state corrections system.

“When people talk about criminal justice, it is always focuses on adults who are in jail,” Sexton said. “It is important that they serve their time, and that when they come out of there that they are involved in  some sort of programming to help them have the skills to be successful. There is a lot of difference on how successful those programs are. True criminal justice reform starts in K-12 education. The reason I say that is because if you look at the average prisoner in our jails, they don’t have a high school degree. If we do a better job of educating our kids and reduce the drop out rate, we know that we will lower the prison population.”

Providing support for law enforcement is another goal Sexton has for the committee.

“We need to make sure when we talk about supporting law enforcement that it’s giving them the things they need to be successful, whether that is faster turn-around testing or resources like a database or communications,” Sexton said. “It’s a much bigger question, and I’m not going to sit here and say truth in sentencing is the end-all, be-all that is going to solve everything. It’s not; it’s a big component of it. We also need to support law enforcement by making sure they have the resources to be successful.”

During the first meeting of the committee on Oct. 5, members of the committee addressed concerns about current good behavior policies within the correction system. Committee member Rep Andrew Farmer, R-Sevierville, suggested TDOC officials make rehabilitation classes mandatory, regardless of if inmates are eligible for parole, and do not apply "good behavior" time when an inmate is committing infractions while incarcerated.

Senate Minority Leader Jeff Yarboro, also on the committee, said the state needs to ensure offenders who do leave prison are less dangerous when they leave than when they were incarcerated.

“You can’t just have indefinite incarceration. We have to think about how to ensure the time inmates are in custody makes it less likely they’ll re-offend and not more likely they’ll re-offend,” Yarbro said. “It is really difficult to make the case that an extra thousand days would’ve made the difference between rehabilitation and criminal behavior for someone who was in prison for 20 years already.”

Rep. Antonio Parkinson, D-Memphis, agreed there the state needed to overhaul how they state approaches rehabilitation with recent numbers indicating 40% of offenders released from state prisons go on to reoffend. Parkinson suggested holding TDOC accountable for recidivism as well as ensuring the mental health care provided to inmates doesn't stop once they leave the system.

Another initiative recently announced is accelerating the hiring process for 25 additional forensic lab positions at TBI.

Gov. Bill Lee, McNally, and Sexton jointly announced the new positions will be expedited ahead of the regular budget process to allow TB to expand testing capacity and reduce the turnaround time for sexual assault kits (SAKs).

“For several years, Tennessee has made historic investments to support the TBI’s mission so that law enforcement can do its job and combat violent crime,” Gov. Bill Lee said. “As our nation faces rising crime, we are taking this additional step to eliminate bureaucratic hurdles, increase the TBI’s capacity and reduce testing turnaround times as quickly as possible. I’m grateful for the partnership of Lt. Gov. McNally, Speaker Sexton and the General Assembly in this important action, and our efforts to strengthen public safety will continue.”

New forensic lab positions, including scientists, technicians and administrative support, will be added in each Grand Division in Tennessee: eight positions at the Jackson lab, 11 positions at the Nashville lab, and six at the Knoxville lab.

“While there is absolutely more to do, I am pleased that we are able to take this additional step toward eliminating this backlog,” McNally said. “We have to get these violent criminals off the streets and keep them off. We cannot do that if we cannot identify, arrest and incarcerate them. Rape is a particularly egregious and heinous crime. The current turnaround times for rape kits are clearly unacceptable."

Recurring funding for these additional forensic lab positions will be included in the state’s upcoming Fiscal Year 2023-2024 budget. In the interim, the TBI will utilize existing funds in the FY 2022-2023 budget.

“This is an important step in a series of steps as we continue working together to eliminate the backlog of rape kits while enhancing our support for the TBI, and law enforcement communities throughout the state,” Sexton said. “Innocence or guilt delayed due to a backlog of DNA testing only compounds the pain and suffering for everyone; I appreciate Gov. Lee, Lt. Gov. McNally, the General Assembly, and the TBI for their commitment to addressing this issue quickly.”

“We have been searching for solutions to these challenges for several years now, and we are thankful for Gov. Lee and leaders of both houses in continuing to hear our concerns and work with us toward permanent fixes,” Rausch said. “The commitment to fund additional positions will help us get a jump on the necessary training time to get new scientists prepared to perform their duties. This is a critical step in the process. In addition to this, we have collaborated with the governor and leadership in both houses to prepare to do several things to immediately improve our turnaround times in our Forensic Biology units.”

Rausch said the funds will be used for providing overtime to current scientists and technicians to work pending cases, expanding operations to include weekends, outsourcing as eligible kits to private laboratories, and contracting with retired TBI special agent/forensic scientists to assist in training new employees to free up current scientists who are pulled from case work to train new scientists.

“We’re confident these steps will bring us closer to more efficient turnaround times and put us in a position, within the next year, to be closer to our goal of 8 to 12 weeks for all evidence,” Rausch said. “We also look forward to continuing the conversation with the Governor and the General Assembly to ensure the Bureau – and its workforce – meet the needs and expectations of the state and its residents.”

Sexton said the new funding is part of ongoing investment the General Assembly has made in the past several years.

"We have increased funding for TBI, and this past year we did increase funding again,” Sexton said. “It didn’t include in the governor’s budget everything they wanted, but they did get a total of 50 new positions with 20 of those being new lab people or forensic scientists. Our goal should be to have them turn around tests between 30 to 60 days. I think everyone believes that the close to 12-month process isn’t fast enough. We want to continue to work with them, and if that means we need to increase their pay, how many people they need, or build a new lab, that’s what we’ll do. If a person who is raped has to wait 12 months for the offender to be charged with a crime, there is a lot of pain and suffering for the victim that is unnecessary.”

McNally said lawmakers are also looking into ways to help streamline other aspects of TBI’s work.

“One of the things we have learned is that the person who handles the kit has to handle it from the moment it arrives through the test. If two or three people handle that kit, they all have to be called to testify at trial,” he said. “They don’t let just one member testify, and a lot of times the criminal defense attorneys are looking for loopholes.”
Court testimony is time-consuming aspect of TBI work McNally said lawmakers are also hoping to improve.
“Another thing they do is call someone to testify, they get so far in the trial, and then end up postponing the trial or calling for a recess,” McNally said. “People end up sitting in court for four to six hours and then have to be called back to testify. We are exploring ways we can use video testimony where the attorneys can ask their questions to the laboratory scientists from the lab.”