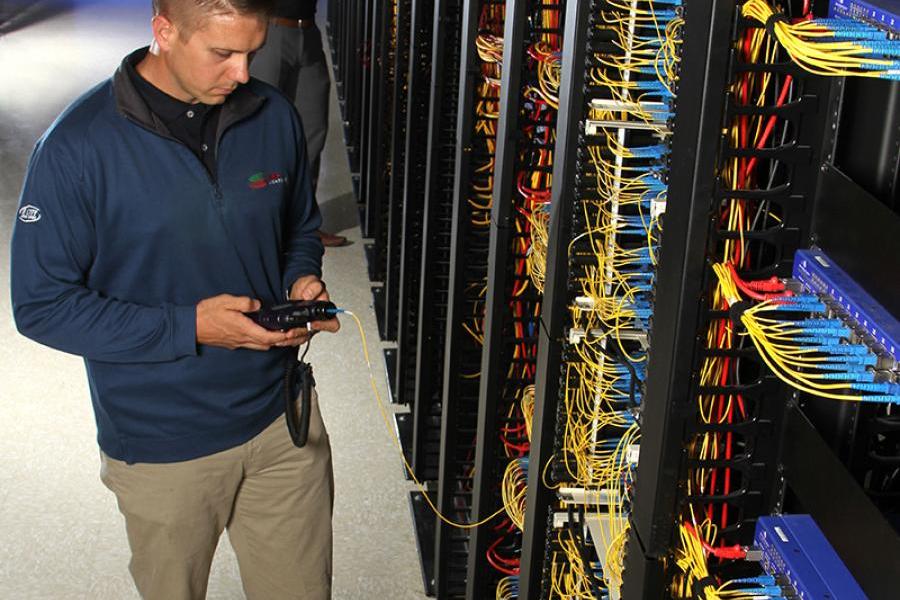 CDE Lightband has been providing broadband internet services to the city of Clarksville for almost 15 years. Those services have become increasingly more important as local residents utilize internet connections for work, school, and play.

As internet services become even more essential for school, work, and play, municipal providers like Clarksville’s CDE Lightband are leading the way in providing affordable, sustainable services in their communities.

“We started our fiber optic active ethernet network in 2006-2007 to manage our electric grid to do remote meter reading, connections, and disconnections,” Batts said. “It was the fastest and easiest way for us to manage our system. Exploring broadband services was also a great way to pay back some of the investment in fiber with additional revenue streams.”

In a referendum vote, 73% of Clarksville voters approved the measure to expand the city’s offerings into broadband. Batts said the city initially began offering 10 mpbs of service, which at the time was one of the top speeds offered, as well as VoIP and broadcast services.

The emerging utility branded itself CDE Lightband to honor both its partnership with the Clarksville Department of Electricity and to reflect the “light speed” at which it could provide internet services to customers.

“At first it was really hard going toe-to-toe with some of the bigger companies,” Batts said. “We didn’t have a lot of money set aside for marketing. We in turn had to borrow $17 million from the electric side to get the equipment needed to distribute services. The first few years we did struggle, but our saturation was growing every year.”

Things began to change in 2011 when customer and service growth accelerated. In June 2021, CDE Lightband had earned enough to pay off that $17 million loan from the electric side of the department – nearly 17 years before it was due.

At present, CDE Lightband offers services from 250 mpbs of internet up to 1 gig residentially and up to 10 gigs for commercial services. The company is the sole supplier of internet to Austin Peay State University, the Clarksville school system, and in most municipal and county government offices within the city limits. More than 72,000 households and businesses in Clarksville – approximately 30% - have their services through CDE Lightband rather than commercial providers. The fact that citizens can even get municipal broadband also makes prices from those commercial providers more competitive.

The network provides savings of more than $10 million annually in operating costs and provides more than $5 million annually in income for electrical grid improvements that result in half as many large-scale power outages compared to peer cities. Additionally, access to the network increases home values in Clarksville by 3% or an average of over $5,000, according to the Fiber to the Home Council. More and more, the broadband services provided by CDE Lightband are becoming as essential to businesses and families as water, electric, and heating services.

“It’s very similar to the progress of electricity and cable television services,” Batts said. “There are always early adopters who want to be the first ones to have the nice, newest, coolest things. The single biggest thing that has changed the perception of internet as a utility has been the pandemic. You have more and more people working from home, most of whom who have not returned to the office. Companies are finding out that they can have people work from home with a smaller office footprint. Small business owners are finding they need that flexibility to work from anywhere. From a residential aspect, it is needed for educational pursuits and managing our households. Everything in our house is ‘smart’  from a smart vacuum to a smart washer and dryer. Those things have become true necessity for customers and how they operate. In turn, that makes internet reliability and connectability even more important to them.”

Being a major provider of internet services to local educational institutions ranging from elementary schools to universities, Batts said CDE Lightband has seen firsthand how important internet access has become for students of all ages.

Prior to the pandemic, the organization was offering 1 gig of point-to-point connection and 10 gigs for front office use of all schools in their coverage area. When virtual schooling became a necessity, they were able to up that to 20 gigs in the front office for distribution to classrooms within a few hours to make sure both in-person and virtual students were being served.

“Going into the next school year, they thought they were going to need to double even that,” Batts said. “Over the summer, we changed out all of those point-to-point connections from 1 gig to 10 gigs and 40 gigs into the front offices.”

“We have externships for a lot of the teachers,” Batts said. “We have teachers who come in over the summer to learn about electricity, energy generation for science coursework, or focus on wireless connectivity and how that works. They learn like students learn. We give them assignments and projects that they turn into a lesson plan later on. One group came in and did an externship on what are the barriers to a clear wifi signals. We also have a demo trailer that goes to schools that shows them a mini version of Clarksville with power and fiber lines. We show them how the power is distributed and what happens if that service is disrupted. It’s always a hit with the children.”

Having municipal services can also be a tool for growing local business and entrepreneurship.

“Within the city limits we have had tremendous business and housing growth,” Batts said. “We have seen in most cases that there is an energy in the market and the market itself fosters growth and development. We are glad to be part of that.”

Perhaps one of the most rewarding things CDE Lightband can do for its community is connect Clarksvillians who are also active duty members of the military with their families in unique ways, all made possible by modern technology.

“We have families with multiple deployments throughout the world,” Batts said. “They can keep in contact through Facetime, Skype, and other ways. It’s huge to keep soldiers and family members connected. We actually have a Little League group here in town who even mounted live cameras at their ballpark and are streaming Little League games so parents who are faraway can use broadband to watch their kids play ball. It has an impact in a community where so many parents are gone for months at a time. It’s important to keep families connected today.”

CDE Lightband continues to look toward the future of services and works hard to ensure what they provide is sustainable for the next generation.

“We’ve worked with Silicon Ranch to put in a solar farm in our community in the next two to three years,” Batts said. “We work closely with a lot of residential customers who are starting to explore solar opportunities for their own homes and give them the support they need to make the right choices. We do a great deal of education with our customers about smart thermostats and smart home services so they can participate in the management of their usage.”

Because of its success with broadband, Batts said CDE Lightband has been able to also make investments that benefit the community’s electric infrastructure.

“When we did that leap of faith to invest in the fiber network, we did it with the electric grid in mind and how it could benefit that aspect,” she said. “The broadband division actually leases fiber access from the electric division. Through those lease agreements and loan payments, our electric utility has been able to build three substations, an $8 million new construction expansion of our main campus and numerous other projects from the lease of the fiber rather than going to the bond market.”