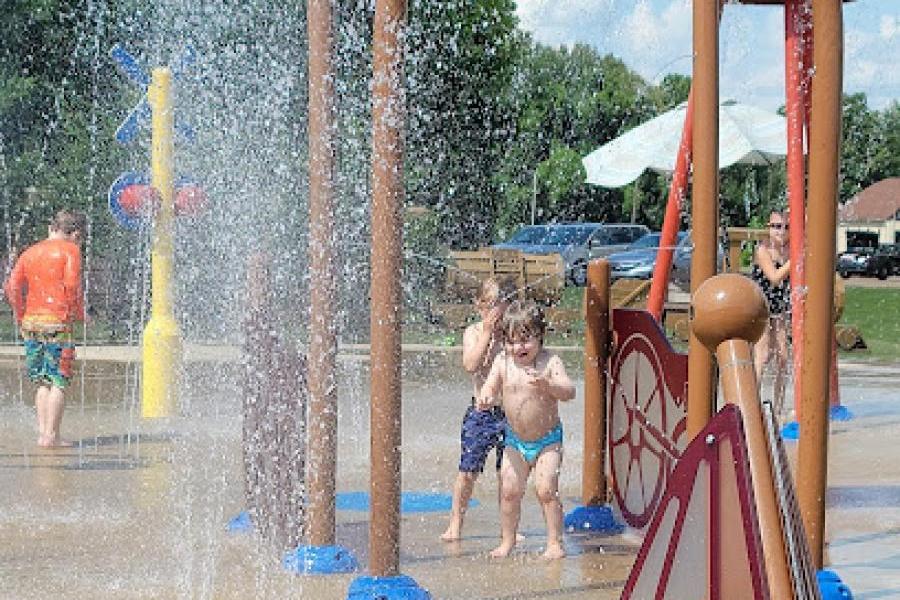 Children play at the McKenzie Station Splash Pad. The city took the disused greenspace, which was home to the city’s original train depot, and converted it into a splash pad and park, one of numerous improvements officials have made in the past few years.

Over the last decade, the city of McKenzie has worked tirelessly to improve all aspects of life for its citizens, including several local park upgrades, renovation of an historic theatre, the launch of a downtown co-working space, additional public safety services, and numerous other accomplishments, all without raising property taxes in the past 12 years.

In recognition of the concerted efforts made by the city of McKenzie, the Tennessee Municipal League is pleased to present McKenzie with an award for Small City Progress.

The city took a neglected greenspace that was the location of the first depot and passenger train track in McKenzie and turned it into a splash pad reflecting the spot’s railroad history. The McKenzie Station Splash Pad has been a popular addition, especially during the summer months. Nearby, the city also established Harmony Park, which gives children of all ages a chance to explore musical skills on a large outdoor instrument. That park will soon expand to include a shaded pavilion.

Opened in 1941, McKenzie’s Park Theatre was known for its unique feature of “sweetheart seats.” The theatre closed in the 1980s and slowly became dilapidated to the point demolition was considered. Work by the McKenzie Industrial Board saw the theatre deeded to the city and through grants and gifts of labor, the city restored the theatre to its former glory. In addition to showing the latest movies, the theatre is now used for community meetings, performances, concerts, and other gatherings.

After losing several local industries in 2008 and with a general industrial decline in the area, the city of McKenzie has also worked diligently to promote industrial growth and expansion in the community. The result has been the location of six new businesses and expansion of four businesses since 2010, resulting in the creation and retention of more than 540 jobs with more on the horizon.

In 2021, the city created the McKenzie Chamber of Commerce and Industry, which reaches out to the local business community through workshops and events as well as to help ensure the success of existing industries. The McKenzie Industrial Board also purchased one of the older buildings in downtown, which has been renovated and turned into a co-working space for entrepreneurs. In addition to private offices, the building offers fast wi-fi, sit and stand desks, a color copier, printer, scanner, fax machine, cubicles, conference meeting space, break area with free coffee, refrigerator, dishwater, and microwave. University students receive discounts to utilize the space. Dubbed the RailYard, it is the only co-working space available in a tri-county area.

The McKenzie Farmers Market is an indoor and outdoor market operation out of a renovated Studebaker dealership. Work is being done to create a commercial kitchen in the market for use by entrepreneurs in manufacturing food products as well as pop-up restaurants

Various city departments across McKenzie have also been hard at work. The Streets and Public Works Department has installed new LED lighting on all city-owned poles to provide a savings of up to $9,000 each month, paved almost five miles of streets since 2010, completed an ADA Accessibility Study leading to upgrades of city-owned buildings and sidewalks, addressed traffic safety issues, and is working on projects to install wi-fi and a music system in downtown.

The McKenzie Police Department has begun posting security cameras in the city parks and downtown and has seen an overall 13.7% crime reduction rate in a three-year period.

The McKenzie Water Department has installed automatic readers to provide accuracy and savings and utilized grants to rehab wastewater lines, manholes, and the wastewater treatment plant. The general city government has also updated desk tops for city clerks, added digital signatures for accounts payable, installed a check scanner to reduce time at the bank, added a new server, installed a drive-thru for customer transactions, and has installed Plexiglas windows, sanitation stations, and temperature thermometers in the wake of the COVID-19 pandemic.

McKenzie is also drawing visitors to downtown through a variety of events. McKenzie is both a Tennessee Downtown and Main Street community, which has allowed for numerous façade grants to improve downtown buildings. The city also hosts numerous events like Nights on Broadway providing music around the square, the Sweet Tea and Southern Pickins Festival in August, the Boo Bash and Scarecrow Grove, and the McKenzie Mistletoe Christmas.